You and I have read stories and watched films about love. You know the usual scenario: man and woman meet, fall in love, surmount impossible obstacles, and then either live happily ever after or one of them dies and it becomes a tragedy. The story of life!

We sit and munch on popcorn until the film finishes and then go home. Then what? As Muslim we have to think: Is the greatest love that which is shared by a man and woman, or is it the love of a human being for his/her Creator?

Love is such a powerful emotion. It enlivens every feeling and nerve in the body and makes the person feel really alive so one will look at the other and say “You make me feel alive!” or “I’ve never felt like this before!” But the question is, does that feeling come from the person alone or from the arousal of such feelings that can come from more than one stimuli?

This is the passionate love of a man and woman, but how many more noble acts and sacrifices have been made in the name of love for Allah and desire to spread His message? Yes, love is a powerful emotion it can be directed to a target that will benefit you or to one that may destroy you.

The gift of love

Everyone is born needing to be loved and this feeling never stops. We love many people for many reasons. And this love is, in fact, a gift from Allah so that humankind may survive.

*A mother loves her baby, she’d do anything to save that baby.

*A father loves his child, he’d also do anything for his family.

*A man and woman love each other, they are committed to sharing their lives together.

*Friends can love each other so sincerely and with such loyalty that they’ll undergo all kinds of difficulties for each other.

Young people are known throughout history as being filled with great passion, a strong sense of justice, with all their nerves and feelings alive! This can be seen as similar to the state of the person who is ‘in love’. Noble young people who are motivated by their love for Allah, are filled with life, energy, and the drive that enables them to make great changes in their society.

The vibrancy and power of youth may be considered threatening and dangerous to governments and rulers who do not want to lose their control over “their” people. The greatest challenge these rulers face is how to control the youth so they can maintain their power.

After all, it is the youth who have orchestrated many changes throughout history. Now think about the youth nowadays.

• How many are struggling for justice?

• How many are struggling for a noble cause?

• How many are struggling to help the homeless and the needy?

• How many are struggling to help the deprived?

• How many are struggling to help those who have been overlooked?

• How many young people love Allah more than any person in their lives?

Now ask yourself: How many youth today take drugs, drink alcohol, and generally engage in destroying their bodies and minds? 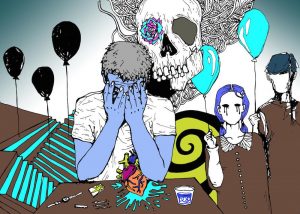 How many youth get involved in relationships without the ties of marriage and then find themselves on an emotional roller coaster?

How many can’t imagine life without a TV, a computer, a DVD player, or a PlayStation? Those boring people who have no imagination, they have forgotten how to live their own lives!

Where is the power of the youth? Who do such youth love? Would a person who loves Allah and strives to obey Him, engage in negative and destructive behavior?

It is extremely unlikely that a young person who is involved in violent behavior (like gang activities), drugs, and alcohol, boyfriend-girlfriend relationships, and living the “entertainment” lifestyle would be the same person who cares about adding to the development of his or her society, taking care of his or her family, educating him- or herself, and striving to help the poor and needy.

The power of the youth springs out of morality. There is a story about when the Muslims were controlling Andalusia (part of modern Spain): Catholics in the north wanted to take over and take Andalusia out of the hands of the Muslims. The Catholic powers sent spies to Andalusia to see if the time was right to invade.

The spies saw two boys. One of them was crying, so they asked him what was wrong. The boy told the spy he was crying because his friend was better than him at archery and such things. The spies looked at each other and returned to their king telling them what the boy had said. The king shook his head and said that it wasn’t yet time to invade because the youth were obviously strong and vibrant.

After some time the spies went again for the same reason. This time they saw a young man sitting alone and crying. They asked him what was wrong, and he said, “My girlfriend has left me for another, and I don’t know how I can live without her!”

The spies were very happy and returned to their king, who smiled and said, “Yes! Now we can beat them.” They did. The Muslims lost the consequent battles and Andalusia fell into the hands of non-Muslims. Did they lose the wars because of their enemies’ superior weapons? No! Their loss of morality led to their overall loss.

You can be a part of the power of the youth. It all depends on where you focus your love and the strong emotions that drive you. It is up you to decide which way you will go. Power is based on morality, keen intelligence that springs from a clean heart, and a pure mind and freedom of spirit that comes about from submitting to the Creator alone and loving Him more than anyone or anything else.

How can someone be addicted to drugs, alcohol, or any harmful substance; live an immoral lifestyle clinging to passing feelings of love; and at the same time hope to have a free spirit, a keen mind, and a peaceful, loving heart?