Phillips Academy, a private college-prep school located in Andover Massachusetts, has copious clubs for students to lead and join.

Hana Illikkal and Moumina Khan are co-leaders of the Muslim Student Association. When asked why they decided to become the authority figures of this club, they had unique responses, but for both girls, it came down to wanting to cultivate and encourage a warm and accepting environment for their fellow Muslim students and themselves.

Hana, age 18, says: “I have been a member of the MSA for four years and it has always been important to me. At a school like Phillips Academy it is incredibly easy to feel like you are the only Muslim kid, and when your schedule inevitably gets busy, you may spend less time focusing on religion. The MSA brings together Muslim students and reminds me of the greater reason why I am at this school.”

For Moumina, also a senior, the MSA served as a safe haven that was reminiscent of the type of community she was comfortable and familiar with: “Prior to Phillips Academy, I had spent nearly ten years in a small Islamic school with a warm, vibrant Muslim community. Transitioning from that to a primarily white environment proved a challenge. It was hard to maintain my iman and feel comfortable with my identity in a place where very few people understood either. However, through the MSA, I was able to meet more people who shared my struggles and identity. This made it easier for me to gain and maintain confidence in my Muslim identity, and to remember that I wasn’t alone in my struggles.”

Hassan, a senior who’s been a member of the MSA for two years, agrees that the club brings a sense of familiarity; the meals that the club hosts in Ramadan are reminiscent of home for him.

“Generally,” he explains, “ I really enjoy our weekly meetings as it is a means of winding down from the week’s activities and allows me to be in a positive state of mind going into the weekend.”

The responsibilities that come along with being largely in charge of this club include planning weekly meetings, proposing discussion topics and receiving and relaying feedback from the MSA members about changes they would like to see in the school to make living as a Muslim on campus easier. This year, as Moumina mentioned, they’ve also been collaborating with the administration to make Ramadan fasting as as easy as possible for observing students. Hana added that she wants to be a safe and approachable person for students to talk to if they need guidance.

After hearing about their efforts, it seemed only natural to ask how much they feel the high school’s community actually supports them, their beliefs, and their endeavors for this club. Their responses, while varying in other areas, interestingly both included an anecdote from their Freshman year at this school.

Moumina recalls: “During my freshman year, the mandated History-100 class taught the grade about the history of the Islamic empire. Some teachers ended up giving misinformation, and I particularly felt extremely uncomfortable when both my teacher and the text fostered discussions about Islam’s supposed violent and oppressive tendencies (such as the time when we had a class debate on whether Islam was a good religion for women and I, a shy and very obviously Muslim girl, had to debate against my friends and peers who strongly argued for ‘no’.)”

Moumina mentioned that the administration must have realized that this curriculum was insensitive as the course is no longer taught in the same fashion. 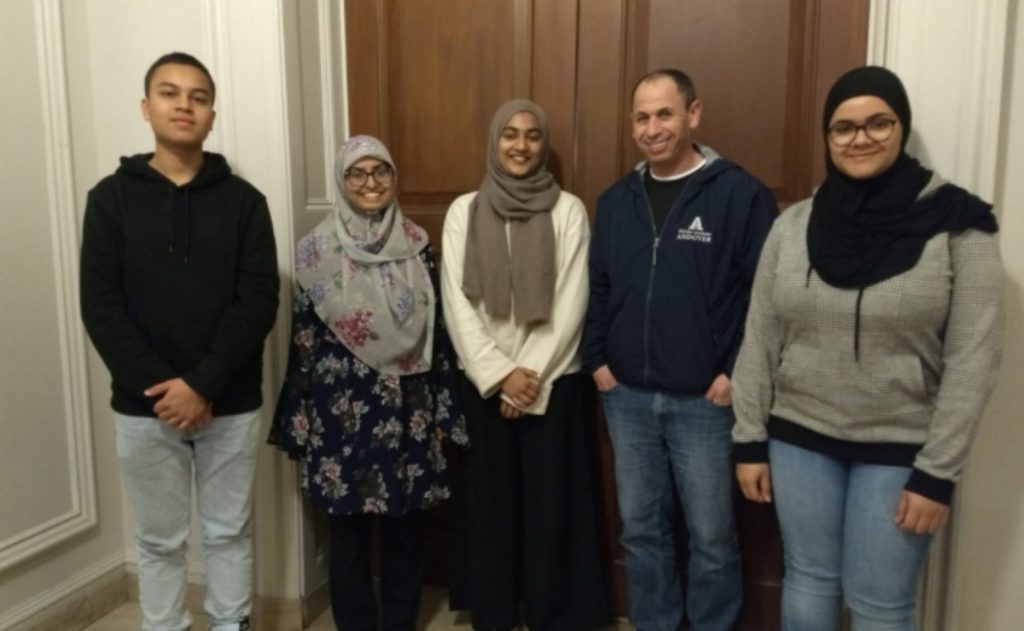 Both girls agreed that being some of the only visible Muslims on campus (both are identifiable by their hijabs and overall modest clothing) presents challenges. Hana explained how it often falls to her and her fellow sisters to debunk misconceptions about the religion.

Another irking but all-too-familiar situation to those who are part of a minority group is being shot sideways glances when the topic in class shifts to religion. Hana told me how she has learned to deal with this uncomfortable incident: “While at first I used to hate this and would just stay silent, I now feel more comfortable talking about my own experiences. I now encourage people to ask me questions and start conversations instead of being too scared of possibly offending me.”

On the other hand, Hana and Moumina say that they’ve also had some warm and memorable experiences at this school, such as teachers approaching them when events like the Muslim ban and the election of Donald Trump occurred, to see if they were doing alright.

Alterations that have been made to accommodate Muslim students may appear minor and go unnoticed by those who aren’t affected, but serving halal chicken in the cafeteria and improving the on-campus prayer space meant a lot to the girls and the rest of the MSA. Hassan feels as though Commons (the on-campus dining hall) can and should do more to accommodate fasting students.

I think it’s safe to say that he speaks for all Muslim boarding students when he says: “Fasting students are currently expected to get food from commons while it is open and store it in a fridge for a couple of hours until it is time to break fast. While this seems straightforward and unproblematic at first, when commons food is left cold for a few hours it leaves an unsatisfying eating experience for the student. Personally, nothing feels worse than eating microwaved rice, chicken, or anything after it has been left to chill in a fridge. After 30 days of having to eat microwaved food that has practically lost its flavor, one can only feel frustrated that a more accommodating system is not put in place.”

One quote from Hana encompasses the importance of this organization for Muslim students who are battling to create a balance of religious practice and fitting into a primarily non-Muslim environment:

“Going to MSA meetings and interacting with the wonderful members, be it over a meeting in the dining hall or an ice cream parlor, has helped me remember that I am not alone in my struggles to connect Andover life with Islamic life.”