In reality, real love is about actions and sacrifice, not ‘dry mouths’ and ‘butterflies.’
aaa

I remember the first time I heard the popular Malaysian song by a local singer titled ‘Facebook Love’. The lyrics were perhaps catchy for teenagers, but certainly not for a young adult like me.

In fact, I was a bit surprised that such a song could be approved and admired by so many. There is no real substance, but merely an empty narrative on how the singer thinks she has fallen in love with a guy whom she knew only through Facebook.

With so little knowledge about this guy and his background, the singer went on and on about how thrilling the relationship was, and how the new love she found has given her so much happiness. The singer openly confessed in the lyrics that ‘her brain tells her not to do so’ but ‘the heart says yes’. They got worse when the singer finally sang, ‘Need to close my eyes, and try anything!’

While such a song may appear innocent, cute and funny to some people, there is indeed a real need for society to be more critical towards whatever that is feeding the mind of the young people today.

Adults often express their shock when teenagers become wild and manifest various inappropriate attitudes and behaviors, but they turn a blind eye to the gradual, cumulative effects of the seemingly mild daily engagements of their children. Perhaps we have forgotten that any sudden, shocking event is usually an outcome of various factors, which happen gradually with time.

A new kind of love

‘Love’ today has become widely and terribly misunderstood. The love relationship that is supposed to be associated with purity, tenderness and affection has turned into sexual, titillating desires and erotic-emotional ties, which in reality has nothing to do with love.

After watching Taylor Swift’s ‘Love Story’ and Rihanna’s ‘Diamond’ video clips, I became baffled and even disgusted that such meaningless and demeaning depictions could actually be confused with love. And this is the kind of misleading message our teens are getting each day!

With the advent of social media, love becomes even cheaper and easier to buy. Girls and boys, and men and women begin to fall in love so often with people whom they barely know, whose existence they assume, and whose characters they imagine. Images of cute guys and pretty girls easily deceive them, and they forget that the pictures look so good only because they are taken from the best angle (to cover a growing pimple), edited, simulated or do not belong to the person in the first place!

Many unbelievable stories have been documented, as a consequence of unwise use of social media. A couple breaking up on their wedding day only because they have never met before, and the guy finds out for the first time that his wife to-be is not as pretty as the images he saw in her Facebook pages. A girl gets broken-hearted when she discovers that her virtual boyfriend does not look like ‘David Beckham’, whose picture he uses to reflect himself in the social media.

A married couple getting divorced only because the husband has a ‘cyber affair’ with a beautiful woman whose existence is yet to be confirmed. All such narratives tell us that even though it is ‘just’ Facebook, social media can have powerful and negative impacts on how humans behave and perceive emotions. 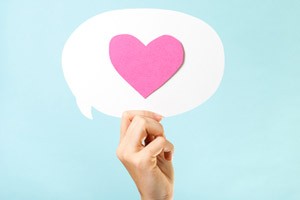 Love is a process

‘Love’ today has become widely and terribly misunderstood. The young today perhaps need to unlearn some of the concepts they have subconsciously internalized. Love is one of them. Love is not about getting hyped up and excessively thrilled about someone when you barely know them. That is infatuation. And love has nothing to do with that roller coaster emotional ride you have when you are around that ‘special one’. That is being hormonal.

In reality, real love is about actions and sacrifice, not ‘dry mouths’ and ‘butterflies.’ Love is a verb, not a feeling.

To achieve love, it requires a process. The more you know and appreciate a person, the stronger the love is. On the contrary, love which appears in few seconds or minutes will rarely last for more than a year, or even a month.

If you suddenly make a firm oath that a guy you just saw few minutes ago is your soul-mate forever, and that it is ‘love at first sight’, it is very likely that you are out of your mind. On another occasion, if you insist on loving the ‘bad guy’ hoping that he would eventually change for you, even when everyone else who cares about you disagrees, you are again out of your mind.

It is not wrong to treat the social media, songs and movies around us with a critical mind. In fact, it is wise to do so, for what we watch and read every day become the ingredients that determine who we are, what we think and how we behave.

Today, people move fast, work fast and get things done fast. We love speed, we desire immediate outcome and we eat instant food. But there is one thing that cannot be instant, lest it value diminishes and its pleasure is lost. That is love.