When we think about spreading the message of dawah, our thoughts illustrate standing in the street to talk to people about Islam.

We imagine answering difficult questions and maybe patiently debating with someone about the ins and outs of our religion. We would love it if a person accepts Islam based on our efforts and how intelligently we answered one of their many questions.

The truth is that very few people are talented enough to spread dawah by word of mouth and through speech standing on the street corners. Not only  you should have a great awareness of Islam but you have to have the ability to talk to people, the charisma and the ability to debate calmly and appropriately with people.

You are already consistently giving da’wah

So what can the rest of us, who may not possess a combination of these talents, do to make dawah? The answer is very simple: show the you’re Muslim. Actions always speak louder than words.

If you live in the West, chances are that most non-Muslims will have only heard about Islam from media. Many have never even met a Muslim so when they see you, they are going to be either worried, full of suspicion or both!

I’ve recently moved to Canada to a predominantly white town with a small population of Muslims. Most people in this town are friendly and welcoming but there are some who will look at me with suspicion and they do not want to be friendly. 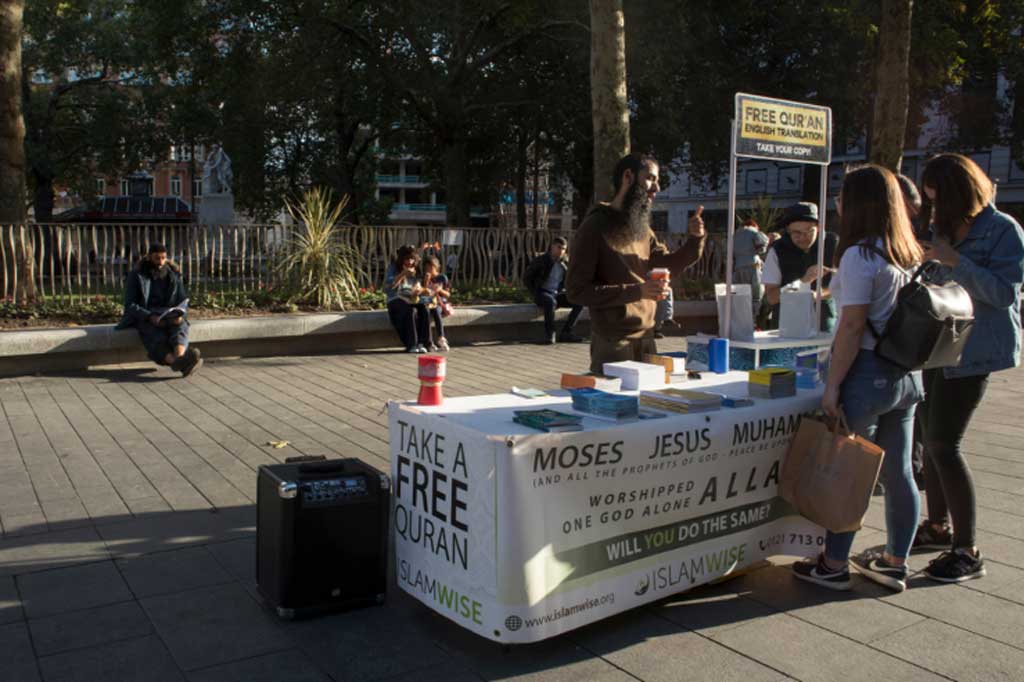 Often, I go into a shop near us to get things for the house which has an elderly woman working there. When we first used to go in, she would give us a cold stare and was unfriendly to say the least.

Last year, my daughter’s class were collecting toys for sick kids in hospitals around Christmas time. I took my daughter to the shop and told her to choose two toys so we could wrap them up to send to these sick kids. When we got to the check-out, the woman was serving us and my daughter told her who the toys were for. I saw instantly the change in her face when she knew that we were buying toys for sick Canadian kids for Christmas.

She changed, she smiled, she looked at us both in a kind way that she had never shown before. Since that day, we are friends. My family traveled for six weeks in the summer to visit our extended family. When we got back, she said with a big happy smile, “I missed you! I am glad you are back safe!”

Another incident took place in a different store when I was buying some folders for our Arabic class. The woman scanned less than what was in my pile. When I told her of the discrepancy, she looked and responded, “Oh thank you so much for your honesty!” I thought nothing of it but for her it was a big deal.

Ultimately, I am representing Islam. I stood as a veiled woman in front of her, telling her there was another to scan, rather than steal it. Through that one small act, she can see Muslims are honest.

“The believers most perfect in faith are those best in character.” – Prophet Muhammad (Tirmidhi)

Sometimes, it is not about whether we are talented speakers and can explain Islam to the hardest of hearts. It is about actions. Everyday, when we go out of the house, when we deal with people, when we shop, go to work or even just relax in the park, our actions say more about us and our religion than an intellectual debate could ever do.

It is not hard to spread dawah. You just have to show them, through manners, through the teachings of Prophet Muhammad (PBUH), that you are Muslim.

Many people have accepted Islam based on the actions of Muslims rather than talking. Who knows, from one small act that you do as a Muslim, can actually plant a seed in someone’s heart who will later accept Islam based on that one tiny deed.