It is true that excessive social networking or the obsession with the internet can turn into a breeding ground for bad habits.
aaa

Every once in a while, a video or an article about how detrimental social media is, will go viral, getting hits and likes and plenty of comments that agree or disagree with the notion that social media is killing the plight of humanity. Then it goes away. After a few months, another one pops up.

As I watched ‘Look Up‘ video, the first thing that came to mind was, oh yes, another one, and this thought was followed by an ayah from the Qur’an.

Well, specifically, they were the 7-9thayahs from Ar-Rahman, reading:

“And the skies, we raised it and imposed a balance. That you do not transgress that balance. And establish weight in justice, and do not make deficient that balance.”

The “Look Up” video is barely talking about the sky, but speaks about establishing real friendship throughout one’s lifetime. It’s about having normal conversations, ones without a chat interface, or an on looking audience of online friends and family even. It’s about savoring moments that would otherwise be lost.

I do agree with all of that, as it’s quite normal to see hoards of people swiping and tapping away at their phones in public places, while walking, during the commute, while with their children, and even sitting across from each other during a meal. The world was once a very different place without this advent of technology.

I’m no alien to all this networking, though I have restrained myself from going beyond Facebook, which is time-consuming on its own, but I can’t really imagine what life would be like without all of these gadgets and the ability to network in a borderless ambit.

Perhaps, life would move slower. We may take time to speak to each other. We would take time to appreciate the butterfly on the flower, without fumbling for the camera function. Perhaps we would have closer physical friendships with our neighbors.

Perhaps we would have more time to look at the sky.

In Surah Rahman, Allah (SWT) brings our attention specifically to the sky, after giving the main reasons of why we should feel immersed in His Mercy.

The sky once played an integral role for the Arabs. With Makkah (and Madinah), situated in the middle of no-man’s land, the sky was the canopy of calm, providing relief of cold during the nights. The sun helped establish the time zones during the day, and ultimately helped schedule the five daily prayers. The horizons marked the beauty of where Allah’s creation of vastness touched the vastness of the golden sand dunes, providing a break in vision across the deserts. The stars twirled as the compass for the many travelers and pilgrims, and the clouds (if any) were telling signs of seasons to come. The moon was the ultimate calendar apps of the time.

“The sky! Look at it!” is basically what Allah is telling us in this timeless message of the Qur’an.

How many times do we take time to look at the sky – to study the clouds or appreciate the weather? While rushing for classes or struggling with traffic congestions – how many times do we pause and admire the horizon? When the sun sets and we’re glued to a screen of sorts with its artificial light, how many times do we log off, and simply look up at the moon and its borrowed light?

It Lies in the Balance

While Allah ta’ala brings our attention to the sky, He actually emphasizes on something that is intrinsic in nature, which is the calculative balance that He has placed within the beams that hold up the content of the skies from crashing down, as it finally will on Judgment Day.

It takes someone with rudimentary knowledge of science that even the slightest change in the distance between the earth and the sun, the moon, and the other planets that rotate on their respective ambits that chaos will break out in the galaxy.

One of the most profound underlying messages in these few ayahs therefore is a reminder for us to accomplish balance in our daily lives before chaos breaks out. It is true that excessive social networking or the obsession with the internet can turn into a breeding ground for bad habits, addictions, the breaking of the family unit, and the loss of physical social contact. Conversations may suffer and relationships may be lost.

But in lieu of remaining realistic, as all Muslims should, technology is part of our life. It has made work a lot easier for many of us. Employers have made work from home an option for many candidates. Parents who choose to stay at home suddenly have opportunities to jump-start their own entrepreneurial ventures. The net has made the resources for education fall like beads from a broken necklace.

Job opportunities, apprenticeships, college applications, only require a few clicks – is a far cry from corresponding by phone, paper and pencil across the far seas as it was once two decades ago. In fact, even degrees can be earned online. The internet has even been a place to foster relationships for activism and volunteer week. In fact – dare we say – friendships have been forged across borders, thanks to social networks like Facebook and ummaland.com.

Not all is ever bad in Islam, if it is not outwardly haram. But it is up to us to balance it out with the good.

Just like nearly everything else we do, we get what we feed. If we spend time on social media subscribing to beneficial sites, following good and healthy role models, keeping good company of friends (yes, I accept many of my Facebook friends as good friends and companionship), watching Islamic videos, and collecting ideas and resources to educate children – then time and energy on social media would not go to waste. There are thicker layers of dimension that delve way beneath duck-bill selfies and posting pictures of breakfasts and new shoes.

For as long as I remember being on Facebook, many of us have reached out to help re-home victims of domestic abuse into safe homes. We have worked together to raise funds for Syria. I know sisters who have inspired others to sponsor Ramadan food packages for families in need across countries.

Even a non-Muslim friend of mine spent out of her own money to feed an orphan home for the entire month, just because she saw me share the cause, (may Allah bless her immensely with guidance).

At a personal level, Facebook users are able to shape nutritional balance in meals for friends, encourage those on the feed to exercise more; sometimes we will unearth a remarkable Hadith that was once buried in a library under books and books of classical texts. But somehow someone pulled it up and posted it online, catalyzing curiosity about it across the ummah. 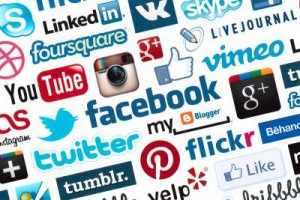 Recently, the story of the paralyzed Saudi Arabian brother – Ibrahim – whom had been living in isolation in his hospital room, hit the Twitter reel. All he did was tweet wishing for someone to visit him. Within 24 hours, the #VisitIbrahim hashtag had been retweeted 200,000 times, sending reels of strangers flocking to King Khalid University Hospital with food and gifts.

This is how powerful social media can become. Despite the unfortunate apparent evils, the goodness of humanity can shine through. The results of #VisitIbrahim opens doors to more hope, as the brother’s appeal garnered donors of all shapes and sizes contributing towards his much-needed life changing surgery. All this: with just a hashtag. This would not have happened two decades ago. And it would have certainly have not happened if a good portion of Saudi Arabia had been looking up, and not at their smart phones.

Striking the Balance with Technology

The video “Look Up” reminds us to fix our relationships with the people around us – our loved ones, our neighbors, our potentially *true* friendships. I wholeheartedly agree. Social media can cause severe damage in our lives if we lose the balance between the real and the virtual world. But we will also lose the balance if we do not see how realistically the two can merge together for greatness.

Allah (SWT) commands us to LOOK UP! But He is not asking us just to look up and around us, at family and friends. We are asked to look higher. We are asked to – with brutal honesty – to understand this sacred relationship we have with Him.

There is more to looking up, by Allah (SWT), than just looking up from the screen. Pondering upon the skies, we are reminded of how small we are, as compared to the vastness of the earth and the seven skies.

No matter how far we can see (ranging from the naked eye to the most advanced telescope), all we ever see are stars. And these stars are situated at the lowest sky. If we look up even higher and ponder at how this balance was established so that we – the honored creatures of Allah ta’ala – can, to our given capacity, bring goodness in this world, we would strive for better balance in all aspects of our lives. And this would include fostering healthy social circles, work relationships, activism opportunities – even if this includes looking down at the screen from time to time, and putting in beneficial time and energy into our beliefs on how social media can help change lives for the better.