The majority of migrant workers everywhere, are people with not many choices in life, or perhaps with no choice at all.
aaa

‘Look at that Bangla guy over there in those shabby clothes! These smelly people are really annoying and disgusting. They stay in overcrowded houses and smell funny!’

There I was, sipping a cup of coffee on a busy street of Kuala Lumpur, overhearing a conversation, which was so mainstream. I stood still, trying to digest those painful words while most others, especially the people behind me approve as an entertaining joke.

And the conversation continued..

‘There was this black African guy who just moved into our area. And a group of Indian workers who come back home from their workplace cycling every day. Get a car, man! I generally stay away from them. Not only because they look dangerous. They seem to be sweating all the time and they don’t use deodorants. I wonder if these people have more sebaceous glands than us.’

Another round of laughter…

I closed my eyes, trying to imagine a young man, whose hope had been shattered because he could not afford proper education, could not secure a job, could not make enough money to feed his siblings or pay the medical bills of his sick parents. I thought of how desperate he feels, and what would be his final way out. To get to another country where he can find some money perhaps means the world to him.

I have heard of a real story of a young foreign girl whose life was originally decent. She later became a maid, abused and exploited, after her father sold all his properties to pay for the medical expenses of her dying mother.

I was once approached by an Egyptian teen as I was walking in Alexandria years ago, with a couple of friends. With a beaming face, he asked if we were Malaysians. Maybe he could guess from the way we dressed. The boy then eagerly told us that he had obtained an offer to join Universiti Teknologi Petronas (UTP) to further his studies. He was desperate to leave the country.

I asked why and his smile faded. ‘Look at how we are treated here,’ he lamented. ‘I have no hope and future in this country.’

I know there are millions of desperate people out there, young and old, whose very basic human rights have been denied by none other than the greed of the corrupt and the exploitation and injustices wreaked upon them by the ruling elite. Unfortunately, their fate is more or less the same wherever they go and migrate to ridicule, discrimination and mistreatment.

Is there apartheid in Malaysia? No way! People will jump if they hear this despicable word. In fact, there are millions of Malaysians, Muslims or non-Muslims alike who proudly identify themselves as fighters against racism, inequality and discrimination. They want equality. They abhor mistreatment.

Ironically, the same principles do not seem to apply when it comes to foreigners. By foreigners, I don’t mean the posh-looking European tourists or the rich Arab visitors who stay in five-star hotels and roam around Kuala Lumpur with calibrated lenses and expensive cameras. I am talking about the migrant workers; from Indonesia, Bangladesh, Pakistan, Myanmar, Cambodia, and others. I’m talking about those who are referred to as “smelly people”.

Not many of us realize the contribution of migrant workers and the huge economic impact they exert. People are rather distracted by claims saying that these ‘shabby’ foreigners are mostly criminals.  Not only reports are often biased, but the media similarly tends to give more highlight to crimes perpetrated by foreigners than by local residents. Is it true that most crimes are committed by them? No one can say for sure. The lack of availability of reliable statistics, the role of politics and the inconsistencies of security forces all have to be carefully considered before a conclusion is reached.

Some Muslim brothers are not equal enough

It is very easy to draw a large Muslim crowd when charity events and talks are held on the Palestinian, Syrian, and Egyptian issues. Out of moral and/or religious commitment, people are united and vow to show solidarity with oppressed humanity out there. However, the migrant workers in Malaysia surprisingly are not seen as ‘equal’ brothers. They are more like nuisance and trouble-makers. They are just ‘less worthy’, for some reason. 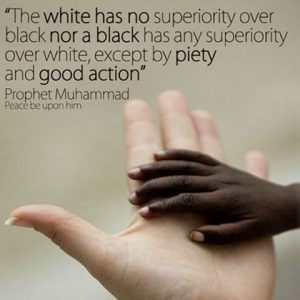 It is not uncommon to see people crying for Palestinians in a masjid one day and cursing some ‘Bangla’ or ‘Indon’ on the street the next day. Our society is also full of heroes who publicly speak against the oppression of Rohingya Muslims in Burma, but get utterly annoyed when they see Rohingya beggars in their neighborhoods. It seems we are ready to die for Islam but we cannot stand the sight of a sweating, deprived Muslim.

The majority of migrant workers everywhere, are people with not many choices in life, or perhaps with no choice at all. They have not come for recreation or sight-seeing but to survive. They hesitantly leave behind families who dream of getting a better life, and memories which haunt them every single day. If only we can see them as equal humans and brothers of faith, the social fabric of mankind in general, and Muslims in particular, will be strengthened.

The Prophet (pbuh) did not once in his life differentiate between his companions who came from rich and elite family backgrounds and those originally deprived like Bilal (a black slave) or Salman (a foreigner). He treated all equally and showed the same degree of love and concern for each of them. Why are we then, in spite of loudly declaring to be faithful followers of the Prophet, choose white over black Muslims, rich over poor Muslims, and respected over destitute Muslims? We certainly have not grasped the true spirit of the Prophet’s teachings.

As I was about to walk away from the laughing crowd behind me, I took a deep breath and glanced at the elegant, shining skyscrapers around which rendered the Malaysian capital so vibrant. All of which were built by the ‘sweat and funny smell’of the ‘smelly people’ or ‘annoying’ migrant workers, whom none appreciates. Does Malaysian society ever bother to know how many of them fell, got injured and died in the process? No one knows. No one cares.

Suddenly my phone rang. It was a Malaysian friend who recently moved to Singapore to earn extra money and get a better life.

‘You know what?’ She screamed’. They (Singaporeans) look down on us here! Just because we come here to work, does not mean we are inferior, or criminals!’

I turned around and faced the laughing crowd. A group of young men and women who looked middle-class, educated and obviously Muslims. If only they had experienced such vulnerability and mistreatment, perhaps they would not be laughing so hard at the “smelly people”. Or maybe the funny smell would not be so funny after all.