Building on what was addressed the last time in terms of acceptance of differences as a means to increase dialogue and overcome boundaries in integration, this article will focus specifically on dealing directly with Islamophobia and strategies we can use to cope with this.

Discrimination, namely Islamophobia in this case, can been exhibited in many ways, both overtly in terms of physical and verbal abuse, as well as covertly, through micro-aggressions such as employment discrimination. Either type can result in psychological trauma and subsequent mental health problems for the victims.

We are then put in a position where we feel it necessary to defend our identity, and counter negative images of Islam by going overboard in presenting ourselves as the most exemplary human beings. Whilst, as Muslims, it is expected that we always behave in the best of manners, we are almost forced to take this to a humanly unnatural level to defend ourselves for something that we did not do. The whole topic of Islamophobia is charged with debates from all angles, especially in terms with how we should respond to it on both an individual and collective level.

There are number of things we can do to best to deal directly with Islamophobia as adults, as well as how to support children in facing the topic too.

Maintain strong connections with your roots.

Islamophobia can be an invalidating experience, even for those who are not direct victims of it, so it is important to maintain strong connections with our Islamic roots by reading the seerah and studying Islamic history. This is an exercise that can be done with the children, as a family, breeding confidence and pride in the religion. In addition, with knowledge then comes confidence, especially when others question beliefs.ggh

They faced oppression greater than what we are facing today and yet they still remained steadfast and prevailed over the oppressors, which even lead to the conversion of many to Islam. The way they responded to their oppressors can give us a great insight in how to do so too.

Respond with that which is better.

This can be really hard to do especially when someone is insulting an identity that is very important to you, but once you try it once you will feel good and confident in yourself that you did not bring yourself down to the level of the oppressors.

‘Good and Evil deeds are not alike. Requite evil with good, and he who is your enemy will become your dearest friend. But none will attain this save those who endure with fortitude and are greatly favored by God.’ (Quran 41: 34-35)

Prophet Muhammad (PBUH) was subject to hate crime all his life but always responded with patience. As our ultimate role model, we should seek to emulate his behavior in the face oppression and hate.

Having this positive response to negative comments will challenge the perpetrators beliefs about what Islam is, after all, islamophobia generally seems to be a result of the unfortunate aggressive behavior of a minority group of Muslims. Additionally, if we take the name ‘islamophobia’ literally as ‘a fear of Islam’ than this would imply that their oppressive behavior is a result of this negative interpretation of Islam, so, by responding in a positive way then their thoughts will be seriously challenged. 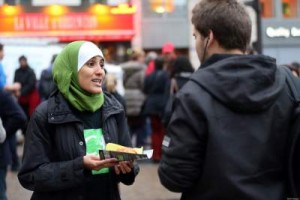 People engage in oppressive behavior because they feel threatened. Put yourselves in their shoes. If you were to set aside your knowledge of Islam and base your opinion of Islam solely based upon what you see in the media what would you think about Islam? Probably nothing good!

So, in countries where Muslims are the minority, the society is more likely to be influenced by and reliant upon media exposure to define what Islam is due to the lack of real life exposure. If we think of it from this angle things become a lot clearer and it’s for us to challenge this by being the best examples of the excellent qualities of Islam.

Pray for the perpetrators.

As the prophet Muhammad (PBUH) did for the Quraysh. This will also soften your heart.

Adopting these more adaptive, helpful coping mechanisms can contribute to positive well-being, whereas utilizing less helpful coping strategies, such as avoidance and disengagement can lead to a negative impact on mental well-being.

Take care of yourself.

Islamophobia and hate crimes challenges the sense of self-worth, even for those who are not direct victims. It’s important not to allow yourself to internalize these opinions of others and neglect your health, so ensure to take care of all aspects of your health; physical, spiritual, social and psychological.

Don’t be afraid to seek counseling. It is all part of self-care. Being a victim of hate crime or Islamophobia can be incredibly disturbing because it goes beyond just a minor insult, but attacks the identity from deep within and have devastating consequences as a result, whether it be in terms of the psychological impact through experiences such as anxiety or depression or attempting to dissociate with Islam by removing any overt symbols of being a Muslim such as the hijab.

All this said, even under the strength of Islam that can enable us to cope more effectively in the face of being a victim of such crimes, discrimination to this level is unacceptable. It is important to speak up and report it in the appropriate way through the appropriate channels.

Not reporting a crime will result in an underrepresentation of statistics about Islamophobic hate crime which will likely result in little governmental or societal action. You may feel that you may not get the support you require, but if all people in the community are reporting their experience then, Insha’ Allah, this will provide sufficient grounds for something to be done about it.

Instill positive attitudes. Encourage children to respond appropriately too. Highlight Qur’anic verses and Islamic examples of how to implement them by being patient with their oppressors as our Prophet (PBUH) was before us.

Be strong in faith together as a family and community.

Praying together will help keep relationships strong within the family and allow them to feel comfortable to come to you if they have a problem. If there is a local Muslim group, go together as a family and let them link in with other Muslim kids who share the same identity. 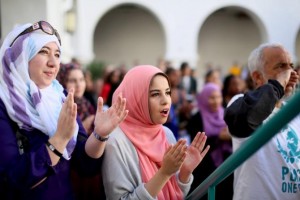 By engaging in the culture and becoming an active member of the community then this can support understanding and positive dialogue.

Be a good role model.

Integrating with other parents will not only allow the children to see Muslims and non-Muslims mixing peacefully but allows the Muslim adult to educate the non-Muslim adult about Islam more subtly by simply showing good character and challenging the negative stereotypes (even if there is no confrontation in the conversation). The non-Muslim parents are then more likely to instill these positive attitudes towards Islam in their own children.

Additionally, parents need to continue to be good role models for their children by continuing to practice Islam in the way they always have, ensuring they remain strong in practice, without engaging in avoidance and dissociative behaviors that may lead the children to then copy these same, less helpful coping strategies.

Think about how you are reacting to events.

Your attitude will rub off on the children, especially when watching the news for example. In the comfort of our own homes we might freely express our disgust at terrorist activities as well as negative public/political response to Islam and may get all worked up and angry. Children observing this might adopt these attitudes but not have the capacity to handle these thoughts appropriately which might then be reflected in their attitudes towards their peers.

Don’t necessarily shield them entirely but do let them know that these terrorist events are completely unIslamic and are in no way a definition of how we should behave in Islam (that, in fact, these actions are entirely the opposite of what we stand for as Muslims)

Expose them to the positive side of the majority culture.

Ensure children are familiar with the culture in which they live. We expect people to accept us as Muslims into their country so we should also respect theirs. By engaging in the culture and becoming an active member of the community then this can support understanding and positive dialogue.

If they do become victim to Islamophobia they should know that not all people in that country are like that, and in fact more people support Muslims in their country.

Talk with their teachers.

Even if there are no incidents, proactively engaging with the school can be a useful tool too. Simply checking in on how they are getting on at school and if they are forming good friendships. If the child knows that their parents have a good relationship with the teachers they will be more likely and comfortable to report trouble should they face it because they will feel supported by the teacher.

Let them feel important and responsible.

In some cases, the teacher might even allow your child to give a presentation to their class about Islam and educate their peers. This can help give a sense of responsibility and achievement as an ambassador of Islam.

Overall, there a number of ways, as both adults and children, which we can respond responsibly to Islamophobia in a positive way. It is for us not to just be passive victims of hate crimes and islamophobia, but to respond in an appropriate way to the perpetrators and report crimes in through valid channels to ensure appropriate action is taken.

This article was first published in March 2016. It’s re-highlighted due to its importance.