Ramadan is the ideal time to remember your relatives in your du’a - ask the Changer of Hearts to improve your relationship and guide them - as He guided you.
aaa

I became Muslim in Ramadan, prayed my first salah in Ramadan and began to wear the hijab full-time from Eid ul Fitr that year. The Ramadan the year before, as a non-Muslim, I fasted in solidarity with my Muslim friend, even trying to wait way longer than the sunset until I could eat.

This year, my son’s 15-year-old non-Muslim friend has also decided to experience fasting. The Holy month is certainly a time for change.

But not all people are so supportive during Ramadan – a Muslim convert friend told me how she was, while fasting, subjected to sitting with her mother in her car while she ate delicious-smelling fish and chips!

Malika, from South Africa, has difficulties generally with her relationship with her non-Muslim family throughout the year. Ramadan is no better:

“I’m a white Muslim who converted years ago. I have an elder brother who is a born Christian so during the month of Ramadan, we don’t meet up at all and after all these years, he has never wished me well; even when I went for Hajj, the subject was never discussed. My children don’t mix with his kids because of cultural differences. They don’t have anything in common so maybe it’s best.”

Brenda, a Muslim sister living in Canada has not had an easy time introducing her parents to Ramadan:

“Nobody feels comfortable eating or drinking when I am fasting. Several friends and relatives thought I expected them to wait until 9:30 p.m. to have dinner – obviously I don’t expect that… they  get very upset if I don’t eat because they are sure I am going to get sick and die on them with my crazy new 1400 year old traditions. They still think I will outgrow this phase after nearly 7 years.” 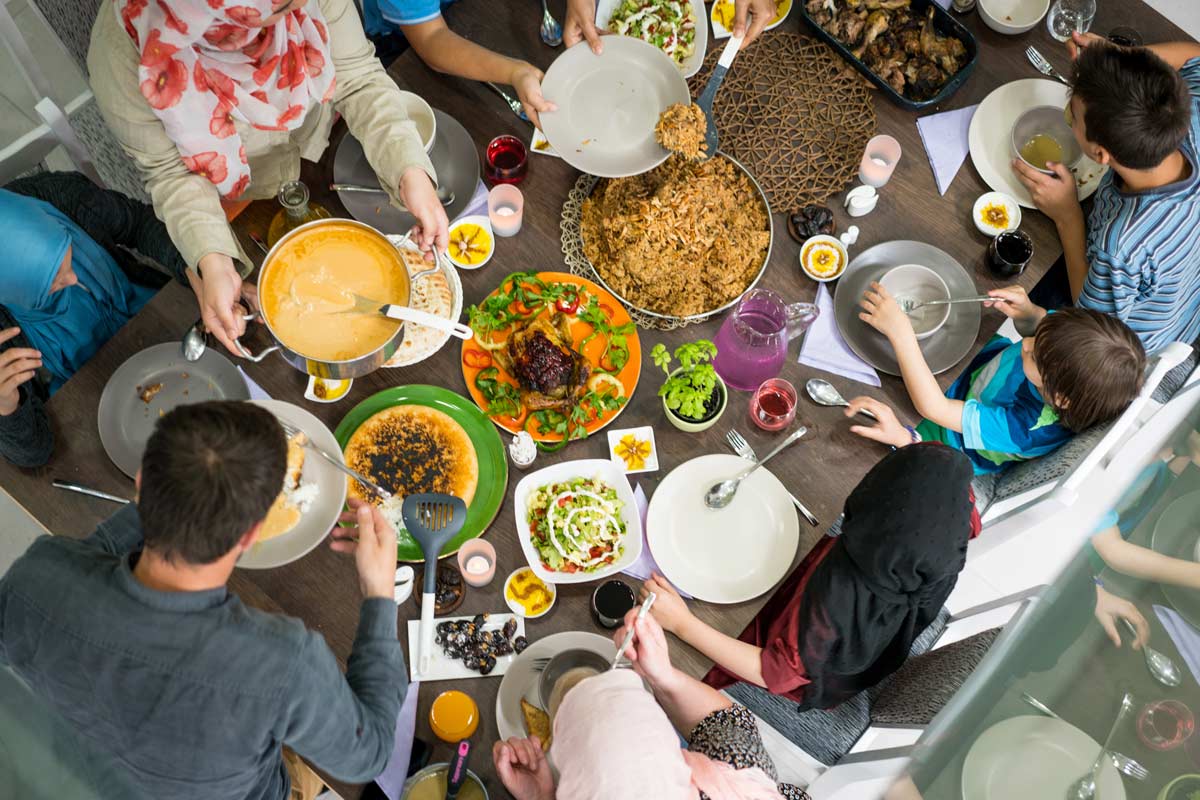 But for many, Ramadan is a positive time when it comes to relationships with non-Muslim family members.

Klaudia, a convert from Poland, shares her experiences:

“I have non-Muslim family – my mum and siblings, and even though they are in another country, we do keep in touch every day so somehow they take part in my Ramadan. My mother is quite worried about me not eating or drinking all day long – just as I remember myself being worried when I fasted for the first time. Every year, my mother prepares Eid parcels for my daughters – her beloved grandchildren, and I really appreciate this effort from her part. It’s our nice little tradition now.”

Liyana lives in the Muslim country Brunei but was born into a non-Muslim family. Three of her brothers converted along with her to Islam, whereas her parents and two of her other siblings have not but are still positive to her fasting:

“My parents, alhamdulillah, welcome the month of Ramadan as much as us. My father made sure we have dates before the holy month starts.”

Elizabeth in the UK has non-Muslim parents who are happy to share in the Ramadan and Eid celebrations, and she showed that Islam is not a difficult religion:

“My mother stayed with us at the beginning of Ramadan this year. We made jokes about her being allowed to eat before she came. I also asked my young children to wait until she had gone home before they try and fast a few hours each day (for their first time).

She knew they wanted to, and her opinion was positive, but I didn’t want the stress for me. Alhamdulillah, during her visit, I only fasted a day and then Allah SWT blessed me with my menses so I could have tea etc. with my mother in a leisurely, hospitable way. In the past, I have been at my parents’ home during part of Ramadan, and even for Eid. Masha Allah, they have cooked a roast for Eid and have delayed family meals when the fasts were short. They send Eid cards twice a year, masha Allah.” 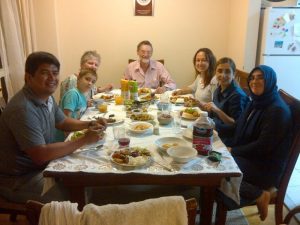 The very act of inviting someone who is not Muslim to an iftar, breaking bread with them, can be life-changing.

From the experiences of the Muslims who have non-Muslim relatives, we can see that Ramadan is often seen as positive part of Islam and if not, it can be a point for discussion. Many non-Muslims equate Ramadan with holidays such as Christmas, and fasting is part of the main religions – Lent for Christians, and Yom Kippur for Jews – so the chance for commonalities and dialogue is increased.

The very act of inviting someone who is not Muslim to an iftar, breaking bread with them, can be life-changing – I have heard of a  Muslim convert brother who took his father (non-Muslim) to an iftar and he was so impressed by the hospitality and kindness he received that his heart opened to Islam and he soon became Muslim.

Tips for a smooth Ramadan with your relatives

1- Reassure your non-Muslim relatives that you are eating healthily and that you are allowed, in fact expected, to stop fasting if you are ill or have other excuses – this will show the sense in Islam.

2- Make sure they realize you do eat suhoor, the early meal before dawn, and that it is highly recommended, and so then they will realize that you do not fast as many hours as they may believe.

3- Your relatives may need reminding though that you cannot drink anything, not even water as maybe their only experience of fasting is giving up certain foods, or of  sponsored fasts where you are allowed to drink fluids.

4- Invite them over for iftar if possible and send gifts and cards to show them you are thinking of them.

5- If you are having difficulties in your relationships with your family members or your relatives have animosity towards Islam, remember Ramadan is the ideal time to remember them in your du’a – ask the Changer of Hearts to improve your relationship and guide them – as He guided you.