Sometimes abusers will use threats and intimidation surrounding any children in the relationship to further their abuse. They may threaten to kidnap the children or send the children overseas to an Islamic country. 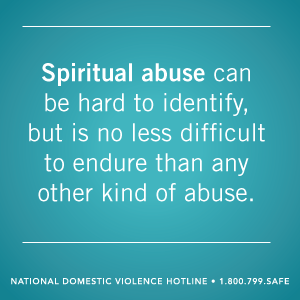 Abusers may threaten to marry the child off young or against their will. They may even threaten to use the Islamic legal system to gain custody of the children.

Using the children as a pawn in abusive mind games is a powerful tactic that keeps many victims in abusive relationships much longer than they would like.

Religious authority figures as part of threats and intimidation

In some cases, abusers will use local imams and other religious figures to further the abuse. “Experts” may be brought in to intimidate the victim into submission and encourage her to stay in the relationship.

There are dozens of other ways that spiritual abuse occurs in relationships. If you want to learn more, I encourage you to read the Muslim Wheel of Domestic Violence by Dr. Sharifa Alkhateeb for more examples.

How spiritual abuse affects our relationships

Spiritual abuse can leave victims feeling alone, isolated, and confused about not only their self-worth, but their close companions and even their relationship with their creator.

With Allah and Islam

When spiritual abuse is used as a control tactic in a domestic relationship it comes in the form of twisted and incorrect understandings of religion to achieve an abusers goals and aims.

When abuse goes further, and involves other members of the community who condone or amplify the abuse, this can cause a victim to question not only their relationship, but their faith as well.

In my talks with abuse survivors, especially converts to Islam who are either in, or have recently left abusive relationships, I’ve learned that many are very frustrated and confused by their choice to convert to Islam because of these abusive experiences. It can be incredibly hard understand the abusive behaviors of some, process the abuse, and heal oneself, when one also feels the whole community was (or is) condoning and supporting the ongoing abuse.

If spiritual abuse was part of the relationship dynamic, there is usually a long process of relearning religious principles and reconnecting to faith that must occur before a survivor can overcome the negative perceptions and understandings they’ve associated with Islam. 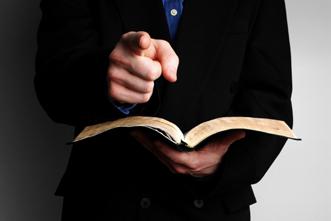 Ongoing spiritual abuse may affect other relationships as well, including those with family, friends, co-workers, and our greater community.

When victims are manipulated by their abuser using spiritually abusive techniques, they may erroneously believe that they need to cut ties with family and friends. Some victims may also no longer feel comfortable interacting with others at school, work, and in the community due in part to the shame, embarrassment, and self-loathing they’ve been taught to experience.

This pulling away from friends, allies, and the local community can lead to breakdowns in a victim’s support system. It can also prevent these helpers from understanding what’s really going on in the relationship. Victims end up slowly hiding their abuse – retreating into isolation inside their homes and apart from the greater Muslim community.

How to help victims

It’s crucially important that Muslims recognize when spiritual abuse is occurring in their own relationships and in the relationships of those around them. While it may be harder to spot than physical, verbal, or financial abuse, it usually goes hand in hand with the other types of controlling behavior.

Make yourself available to victims by routinely speaking up about abuse and letting people in your circle know that you are available to listen – you may be surprised who will step forward or reach out.

Read domestic abuse survival stories and learn what it was like for those who have lives through abusive relationships. I also encourage readers to inform themselves on the techniques that abusers use so that we can better identify abusive behavior and help members of our communities in need of support.

The best way to help abuse victims is to understand what they are going through, and then give them the support they need on their terms in order to make changes in their lives and relationships. There is no quick fix for spiritual abuse in Muslim relationships, but education is the best defense.

More on the Topic:

Khan: Abusive Relations in the Name of Islam