In Greek mythology the character of narcissus falls in love with his own reflection in a pool of water. What we fail to understand from this legend is that Narcissus did not fall in love with himself, but only with an image, or a once removed distortion of his true self.

Like Narcissus, we all prefer the more flattering image we project than the truth of what we are. Most of us fake it to make it because we are aspiring to uphold higher standards, exude good manners, and maintain our self-respect. We all indulge in fake formalities because they are a necessary feature of an efficient social life. And this in no way makes us fake or phony.

However, when a fake image becomes all that matters and all that we are, then we are not dealing with healthy narcissism anymore, but with a pathological and malignant condition.

In his best-selling book, People of the Lie, the late psychiatrist Scott Peck proposed that malignant narcissists are not only evil but that they should be diagnosed accordingly. He is not the only one who made this unconventional diagnostic leap. The social psychologist Eric Fromm who was the first to coin the term “malignant narcissist,” describes it as being a “severe mental sickness” representing “the quintessence of evil.”

According to our many cultural motifs, evil has no power except through the extortion of energy from others. The metaphor of a vampire is an accurate one.  The bad energy we feel when we are around certain people is the sensation of having our own energies depleted. The creature depicted in the wildly popular Harry Potter films, known as the Dementor, is also an accurate metaphor for this phenomenon.  The Dementor is a creature without a soul who deprives human minds from happiness.

Hollywood has mastered the depiction of evil through its many metaphorical devices.  But more importantly Hollywood itself actually provides us with the quintessential analogy to the understanding of all evil.  This because, the life of someone with a fake persona is nothing more than a projection, like a film on a movie screen.  We are the spectators who are totally unaware  that the characters, the plot and even the setting are a lie. And just like in the screening of a film, the lie depends on our suspension of disbelief.

Evil cannot exist independently of human perception and depends exclusively on our psychological cooperation.  In other words,   evil is man-made. Evil is the smoke, the screen and the mirrors which we can shatter simply by going back stage and demystifying all its cheap little special effects.

The Road to Hell (perception is not reality)

There are two developmental pathways that can lead to Malignant Narcissism. The first path can develop when a child or young adult is severely abused. The second is when a child is pampered, overindulged and over protected to the extent that they are stunted from forming a personality in accordance with the social rules and/or laws of nature.

Such children are conditioned (usually through random operant conditioning tactics) to ignore their own perceptions of reality and by extension society’s because the only reality they are permitted to occupy is the space of parental expectations. 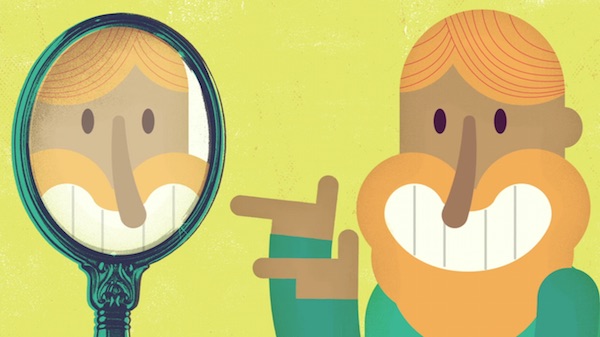 Both developmental paths, whether its pain or privilege, can lead the individual to create a false self or ego that is emotionally bullet proof as a way of dealing with the emotional wounds of an abnormal upbringing.

Over time the child’s organic identity, or what we call firtra in the Islamic tradition, is intentionally and slowly mutilated. It is at this point that a deeply wounded ego is tempted to strike the Faustian bargain or what we refer to in urban legends as a ‘pact with the devil’.

This “pact” is the impetus for the emergence of an emotionally self-sufficient false ego, because that which is false cannot experience pain. This is not a conscious process. It is merely a defense mechanism that evolves in response to abnormal circumstances manufactured by others; typically authority figures.

Pain is not the only path to developing narcissism.  The other path is privilege.  To be over privileged is to be denied the opportunity to struggle and fail. Without a healthy exposure to the pangs of reality individuals can be robbed of the self-worth and healthy pride that would evolve in response to the struggles of life.

Without a healthy outlet for individual self-expression, these individuals grow to become deeply and pathologically insecure; A condition they alleviate by fortifying themselves with a false personality. If the abuse came in the form of unearned privilege, then the false personality can only be structured around the idea that their inherited not acquired status carries some kind of moral and political significance.

All forms of tribalism or societies organized around a system of inherited social status are supremacist by definition, and prone to breeding narcissistic personality types.

Therefore, you will find that personality disorders are more prevalent in certain cultures than in others. They are, for example, not only prevalent in the upper echelons of the white supremacist sub culture but also common in some of the Gulf states of the Middle East where entire generations are being raised without a sense of reality outside of the one that is being socially engineered for them by those who wish to maintain a particular status quo.

This is how Narcissism evolves as a social phenomenon. But luckily, it is possible to reject social norms and strike out against them. But when a personality evolves through the direct intervention of an abusive parent or authority figure, then narcissism and its countless co-morbidities can become a life sentence.

How to Identify a Narcissist

Many narcissists are pathological liars, but since they do not believe in an objective truth that applies equally to everyone, and since their whole existence is based on a projection with no relationship to reality, a lie is merely a creative strategy employed to fortify an image. This image is typically one of perfection, fully equipped with all the trappings of moral superiority. 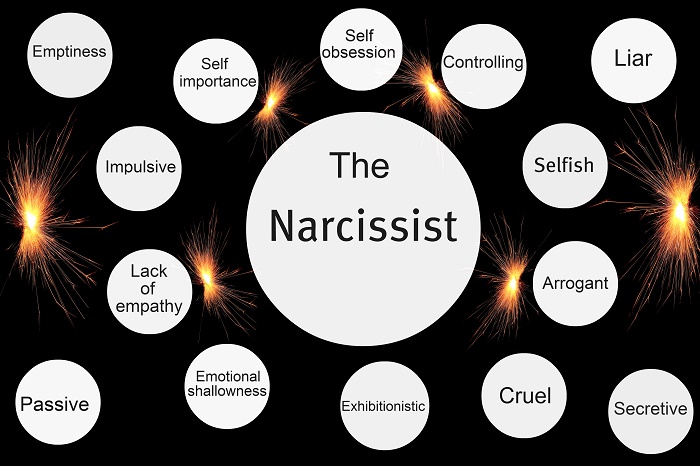 Many populists, cult leaders, gurus, and dictators fall somewhere on the narcissism spectrum and they lie with such impunity that our perception begins to accept them as truths. Our minds cannot reconcile the confidence and moral stature of a powerful giant with that of a petty sniveling little liar. Instead of questioning the narcissist we then begin to question our own perceptions.

Narcissists also have an insatiable need for power. They will fake intense emotions of love, anger, disappointment and approval with their employees, spouses and children, only to suddenly and randomly withdraw their affections or switch emotional gears. Unwilling to experience real emotion, they validate their reality by sadistically exercising power over the emotions of others.

Whenever a meaningful emotion does threaten to surface they will desensitize themselves to it by subjecting themselves to the pain of others.  The more you clamor to appease them, the more random their requests. They are control freaks because control is how they are able to reinforce the reality of a false self.  Its real they believe, because it has an impact on those who are real. In other words, those with real emotions.

But the narcissist is anything but real, The false ego is a mirage. And although the lack of emotional friction allows narcissists to get far in life, it also leaves them bereft of joy.  Their entire existence is indentured to the insatiable appetites of the false self or mask that they wear to maintain appearances.  They manipulate others but they are the ones being manipulated; by their own inner demons.

Prevention is the Cure

When we fight for social justice we are eradicating the conditions that breed these personality types. Those conditions are either childhood deprivation and/or abuse or political realities that grant unjustified and unearned privileges to some at the expense of others.   Every time you fight for social justice or alleviate someone’s pain through acts of kindness, you are quite literally fighting evil.

Wherever you see evil in your own life the best way to deal with it is by withdrawing from the scene. Evil cannot survive without extorting your energy. It will naturally self-destruct provided that you do not invigorate it through retaliation and revenge.  Negative drama or positive praise are equally empowering to a narcissist.

Without your cooperation and energy the false ego will demand    more and more fortification. If the narcissist decides to resist the demands of his false ego, he will find himself acting in uncontrollable ways.

Compulsive shopping, promiscuity, kleptomania, and hoarding, are just some of the symptoms of a raging inner battle. Although a false self can infect anyone who is going through a difficult and traumatic time, most people resist by ‘acting out’ as a first measure. But for a narcissist, acting out is the last battle cry of a dying false self.

The attempt to heal from a life of spiritual trauma at the hands of a demented parent or a demented society can lead to even great sociopathic tendencies.  True healing and genuine emotional restoration is always an act of divine intervention. And without a spiritual orientation and understanding of this, we cannot even approach the topic of healing.

A moment of humility and surrender by the afflicted soul is all it takes to usher in the healing process. But this requires a total and sincere surrender to God and faith.  Not an orchestrated surrender, but a genuine collapse of the ego before the almighty.

It seems easy enough, but it is impossible for a narcissist to admit vulnerability. And surrender of any kind is a painful reminder of the helplessness they felt in the hands of their oppressor. But they must surrender. For only when we relinquish our false self and embrace the power of authenticity over the delusion of a perfect and powerful self, can we be brought back into the light of a forgiving God.