Although growing Islamophobia is evident, I believe it is a mistake to assume that all non-Muslims subscribe to the caricatures they see of Muslims.
aaa

I lived for twenty-two years without Islam. Once I began wearing hijab, I was no longer just another girl-next-door; it was like stepping out of the shoes of someone easily accepted, familiar, naturally entitled by complexion and culture, and into a new, very different role of an identifiable member of a religious minority.

A minority often misunderstood, perceived as foreign, and stereotyped as regressive, violent and extreme.

Today, we are surrounded by examples of mounting hatred and vehemence directed towards Islam.

Mosques and Islamic schools have been vandalized and set on fire, and there has been a rise in violence against Muslims.

Micro aggressions against Muslims and Islam are ever-present in the media; television shows, movies and news outlets – from the overt statements of TV personalities and pundits, to more covert displays of bias in mainstream TV dramas and sitcoms.

I knew virtually nothing of Islam until soon before I entered it.

I had no Muslims in my life or environment.

This is the case for many Americans; so unfortunately, their knowledge about Islam and Muslims is based largely on selective, and often biased or misinformed media representations.

Naturally, this can have a detrimental impact on the stereotypes non-Muslims develop.

All of this in turn, may lead some Muslims to internalize that hatred and bigotry, negatively affecting psychological health and leading to increased anxiety, stress, and feelings of alienation.

As a result, many Muslim women, fearing to be recognized, have chosen to remove their hijabs. Some men have opted to shave their beards.

A study entitled: Subtle and Overt Forms of Islamophobia: Microaggressions toward Muslim Americans (Nadal 2012) described a woman who chose to use her middle name Sarah, to avoid suspicion and scorn.

I had a customer when I worked in Manhattan 12 years ago who changed his name from Muhammad to Moe.

I remember the strange look in his eye when he clearly pronounced it, “Moe” as if he feared that I, a fellow Muslim, might reveal his true identity.

Although growing Islamophobia is evident, I believe it is a mistake to assume that it is all encompassing and that all non-Muslims subscribe to the caricatures they see of Muslims and Islam.

I myself have fallen victim to this sort of thinking at times, and have found it to be flawed and nothing more than a barrier to improving the situation.

I am normally a friendly and outgoing person, but when I moved with my husband and young children from a diverse community in NYC to this suburban town four years ago, I feared that our neighbors might not be too excited about a Muslim family moving in.

I was so overcome by this notion that I literally scurried into my house several times to deliberately circumvent bumping into my new next-door neighbour.

I avoided going into my backyard, awkwardly peeking through a crack in the blinds, until it was clear of any neighbors who might see me go out.

As it turned out, my fears were unfounded and my neighbors were the ones who extended their hands in benevolence to my family.

I felt ridiculous for having been so fearful when a wonderful lady who lives two houses down, approached me while I was with my children in the backyard.

She kindly introduced herself, and since then we have developed a great relationship characterized by mutual care and pleasure with one another’s company.

Her initiative highlighted my misguided reservations.

Since that day, my family has established very positive relations with all of our immediate neighbors, who often wave hello as I drive by and stop to chat when I take my children for a walk.

If we happen to be bringing the garbage out to the curb at the same time, friendly conversation is commonplace.

In fact, everywhere I go I am met with smiles and kindness.

The acceptance and kindness we have received from our neighbors has helped restore my confidence as a Muslim woman in a predominantly non-Muslim country.

I feel like a banner, constantly remaining aware of my responsibility as representative of Islam.

Therefore, I am very intentional when it comes to making myself approachable and friendly wherever I go.

I strike up conversations with my cashiers and greet people in passing when appropriate.

I keep in mind the hadith where the Prophet Muhammad said, “Smiling is charity” making sure I try to give away as many warm smiles as I can.

Because my normal day-to-day interactions have been so positive, I was taken aback the day after the attacks on a satirical magazine in France, when I walked into my local grocery store.

I became startled by the sensation of intense glares that seemed to be coming from every direction.

That day, it was as if the floodgates were opened and all my previous fears rushed back in.

That day, I felt uncomfortable – under scrutiny and suspicion.

As if I was the gunman, casually shopping for apples after committing the heinous crime of cold-blooded murder.

I felt my own eyes become heavy, lowered in disgrace, unwilling to make eye contact. I felt anxious to complete my task as quickly as possible, and rush back to the sanctuary of my car, but I resisted the urge.

I resolved instead, to hold my head high – to be myself.

I am proud and thankful to be Muslim. I had to remind myself that most of the people in the store that day, probably had no idea what Islam really is, just as I had not known before.

I knew that I shouldn’t allow my actions to be influenced by their lack of knowledge or my perception of their judgment.

In truth, I have nothing to be ashamed of, quite the opposite actually.

I have something better than water to one stranded in a vast desert.

I have what most souls crave and struggle to discover, or sadly, despair of finding; something many people would rejoice over if they were to come to know it.

How can I hold such a jewel – my Islam – and cover it in shame because a few people assumed Islam was something distasteful? How could I cower in humiliation when I have something so abundantly virtuous?

So Instead, I allowed my eyes to express the happiness that only comes from possessing the treasure of Islam.

I tried to move throughout the store with the manners imbued in me by our beautiful deen and the pristine example of the Prophet Muhammad (PBUH). 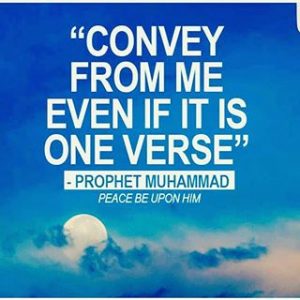 Being kind and friendly is disarming.

It helps put people at ease and makes them feel safe.

This is one of the reasons smiling is considered a sadaqah.

This is the least we as Muslims can do.

It helps us show those around we are kind, and helps them feel connected with us instead of alienated.

Without that connection, empathy is unlikely. Lack of empathy facilitates dehumanization.

The Quran teaches us about how the prophets helped guide those around them.

Sharing with them, the opportunity to successfully fulfill the purpose of their lives by following God’s guidance.

They sacrificed their own wealth, health, safety and comfort to try to help others attain the pleasure of Allah.

Naturally, as Muslims, we are also the carriers of the message given to us by Allah via the prophet Muhammad.

We have a responsibility, first to learn our perfect religion, and then to be great examples of it in practice.

We can share it with others in a beneficial way, with wisdom and beautiful speech.

Even if only sharing one small bit of the Islam we know, whether it is just a smile, or a helping hand.

May Allah guide us to learn, practice and be true carriers of the virtuous manners and etiquette inspired by Islam. Ameen.