About 2 months have passed since the horrific act of terrorism that took place at Charlie Hebdo in Paris, France, killing 12 people.

Now France is not making headlines and media is no more talking about French Muslims But before we forget about the incident one must ask: Why?  What is going on in France where some 64.5 million Muslims live (5 – 10% of the population)? In order to fully expound upon some of the most important factors that may be intertwined with the radicalization of Muslims, we must examine the culture, country and laws in which they live.

Half the Muslim population in France is under the age of 24. A Brookings Institution publication, Being Muslims in France, cites a study that reveals that approximately 1.5 million French children live in families that have immigrated from Muslim countries and that Islam is the second largest religion in France following Catholicism.

According to the Portland Press Herald, “Unemployment and poverty remain far higher among France’s Muslims than in the nation overall. Joblessness and poverty are particularly high in heavily Muslim Paris suburbs.”

The French antiracism organization, SOS Racisme,conducted a study that found that those with a non-European sounding name were less likely to be hired. A New York Times editorial says that, in light of the Charlie Hebdo tragedy, France is forced to examine the “decades-long failure of France to address long-festering alienation and exclusion among too many Muslim immigrants and their French-born children.”

The Brookings Institution study found that, commonly, Muslims in France have sought to create a French-Muslim Identity, as they have experienced the “bitterness” of rejection from French society, while at the same time experiencing successful integration on a few levels.

While trying to hold on to customs, cultures and religious beliefs, and at the same time trying to assimilate into French society, Muslims are faced with many anti-Islam laws such as the law banning the niqab and burka, which was passed in 2011.

According to some critics, the banning of the niqab and burka violates human rights to freedom of speech and expression and gives too much power to the state. Oddly, this comes from a country that highly values these freedoms.

Humiliation and discrimination is prevalent in many suburbs of Paris. Mohamed Binakdan, 32, described to the Portland Press Herald his experience going to a party and being asked by people who noticed his beard when he was going to Syria to join the jihad; or going to a nightclub and not being allowed in.

Binakdan further states that “by putting the Charlie Hebdo publication on a pedestal, the French are once again sidelining the Muslim community, feeding into a general sense of discrimination which, they argue, helped create the conditions for radicalization in the first place. Charlie Hebdo is a part of that, too. Those who are stronger than us are mocking us. We have high unemployment, high poverty. Religion is all we have left. This is sacred to us. And yes, we have a hard time laughing about it.” 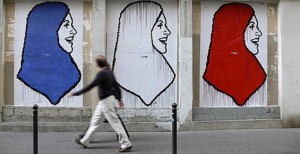 Muslims in France have sought to create a French-Muslim Identity, as they have experienced the “bitterness” of rejection from French society

As the tragedy and horror of the Charlie Hebdo attack continues to unfold, it is interesting to ponder upon the Charlie Hebdo legacy.  While promoting free speech and satire, Charlie Hebdo has experienced a history of lawsuits and bans. Indeed, Charlie Hebdo was created after its predecessor, Hara-Kiri, was banned for making a joke at the expense of the death of Charles de Gaulle.

In November 1970, the former French president Charles de Gaulle died in his home village of Colombey-les-Deux-Églises, eight days after a fire in a nightclub resulted in the deaths of 146 people. The magazine released a cover spoofing the popular press’s coverage of this disaster, headlined “Tragic Ball in Colombey–One Dead.”

Thus France does exert its limits on free speech, depending on who is the target of satire. In order to sidestep the ban, the “editorial team decided to change its title, and used Charlie Hebdo. … The monthly Charlie took its name from the lead character of one of the comics it originally published, Peanuts’s Charlie Brown. Using that title for the new weekly magazine was also an inside joke about Charles de Gaulle. The first issue did feature a Peanuts strip, as the editors were fans of the series.”

Examining for a moment the significance of Charlie Brown, who he is, and what he represents, Charlie Brown is best defined by his creator, Charles Schulz, who states, “Charlie Brown must be the one who suffers, because he’s a caricature of the average person. Most of us are much more acquainted with losing than winning. Winning is great, but it isn’t funny.” In many of the stories, Charlie Brown illustrates the kid who keeps trying but never wins. In one episode, Lucy asks Charlie, “How long will you fail at this? ALL YOUR LIFE, Charlie Brown, all your life!” Charlie Brown represented the lovable loser.

Like Charlie Brown, are the Muslim youth in Paris getting the message from society that they will always suffer and always fail?  Based on the above statistics concerning high levels of unemployment, low graduation, as well as enduring humiliation and racism, how do the Muslim youth of France deal with the ever-prevalent Islamophobia? Are coping skills taught in mosques? Are imams taking the lead to encourage youth to work towards hopeful and positive goals and futures? Are communities able to provide resources for disenfranchised youth? These are some of the questions that we as an ummah (worldwide Muslim community) must be asking ourselves.

In light of the fact that Charlie Hebdo was named in part after the comic strip character Charlie Brown, should it not stand to reason that the slant of the editorials would be in favor for those scapegoated or marginalized by society? Or does the satire take a darker turn, by further pushing those who are marginalized into a never-ending abyss of despair? Not to be defeated, on Jan. 14, 2015, shortly after the terror attack, Charlie Hebdo came out with another caricature of the Prophet Mohammad (peace be upon him) holding a sign saying, “Je suis Charlie”. Headline translation: all is forgiven.

According to the New York Post, “Nearly 5 million copies of the magazine sold out in France within hours of landing on store shelves on Jan. 14 — one week after machine-gun wielding Islamic extremists massacred 12 staffers in Charlie Hebdo’s Paris office.” Charlie Hebdo also quickly sold out at the first three New York City stores that carried the French weekly, writes the Post.

While demonstrating their commitment to free speech, one must ask which people they might be hurting? Do they care? I remember the saying “You are free to swing your fist as long as it doesn’t hurt someone.”

The British dictionary describes radical/radicalization as “relating to, or characteristic of the basic or inherent constitution of a person or thing; fundamental: a radical fault, concerned with or tending to concentrate on fundamental aspects of a matter; searching or thoroughgoing: radical thought, a radical re-examination, favoring or tending to produce extreme or fundamental changes in political, economic, or social conditions, institutions, habits of mind, etc: a radical part.”

Radicalization in its broadest definition is to bring about extreme change.  As we can see, radicalization doesn’t usually just happen over night. It is a slow process that begins with trying to change things in socially acceptable ways such as applying for jobs, going to school, attempts at assimilating, voting, petitioning to change laws and so forth.  When this doesn’t appear to be effective, some may become more radicalized in their approach in order to “wake up” the system.