Being one of the major issues for US Muslim families, marriage crisis was on the roundtable for experts and audience to discuss at the 55th annual national conference of The Islamic Society of North America (ISNA).

Dr. Rania Awaad spoke on Saturday to a big number of attendees about the Muslim marriage crisis. Awaad discussed the problems faced by married couples and reflected on myths and solutions to having a healthy relationship between the husband and wife.

According to the statistics of Stanford University in 2016, 50% of the married people tend to have divorce within the first five years of their marriage. Interestingly, almost 35% of Muslim couples divorce each year. 68.2% of the couples have negative interactions and 56.1% have major issues. Dr. Awaad expressed that the high level of divorce happening in our Muslim community turned marriage to be like a Halal dating unfortunately and that Muslims are becoming more influenced by the modern secular society turning away from true essence of our religion.

Dr. Awaad emphasized that the lecture applies to typical couples who have normal conflicts and does not apply to those facing any kind of abuse such as physical or emotional abuse. 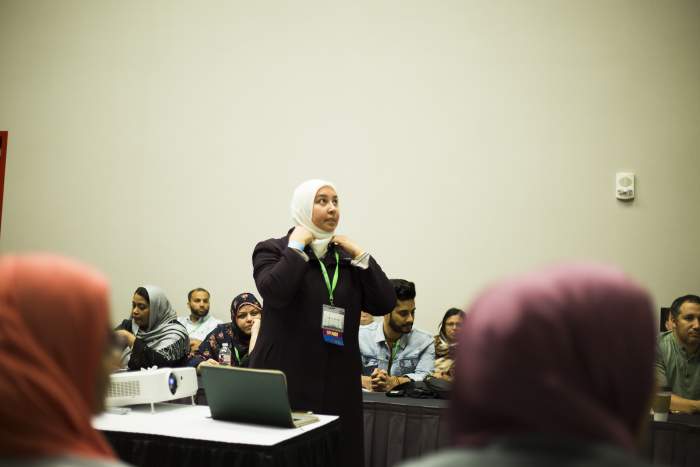 “Allah is watching!” Dr. Awaad said as she explained the concept of “Taqwa” and the fear of Allah. Most couples do not have  juristic knowledge or even information about marriage. Marriage comes easy and naturally, however marriage is work. Marriage needs an effort from both sides to meet in the middle and continue their lives together. Each side should have interpersonal relationships and should know that sometimes the person will not only marry the one they love, but may marry the whole family with him/her.

“And of His signs is that He created for you from yourselves mates that you may find tranquillity in them; and He placed between you affection and mercy. Indeed in that are signs for a people who give thought. (Qur’an 30:21)”

Therefore, each married person should find a creative pattern to approach the other person.

Allah does not oppress people, but people may oppress and wrong themselves. Love should be mutual and from two ways.

Dr. Awaad encouraged the couple who are about to take the big step of marriage to have a premarital counseling. It takes a professional to ask the right questions and see the compatibility of the two persons. The counselor should study the core beliefs and life history of each person and see the common figures.

Dr. Awaad admires the arranged marriage for one reason which is the research behind it. According to Awaad, the old aunties usually have a long list of names who are looking for a life companion and they have qualities to look for till they find the right persons for them. The list could be eliminated to one who can be the best match to the person.

There are different stages in marriage. The first one is called “Black and White” stage. This stage is usually applied to the premarital period. Men or women who are seeking a spouse always look at the qualifications and figure out what is appropriate for them. These qualities usually are black or white, either acceptable or not acceptable.

In marital life, there is nothing called black or white only, but it’s a life lived on different levels with ups and downs. 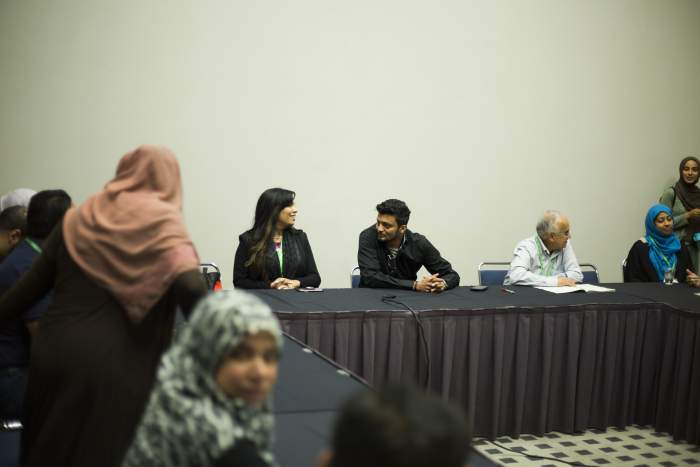 Patience is the key

Awaad also advised couples not to fall in the trap of saying who’s right and who’s wrong. If a woman restrains herself from having any sexual interaction with her husband – for example. The husband shouldn’t use the blame on her, but rather he should be asking “Why.” The behavior of the spouse indicates if there is something right or wrong. A person should ask “Why” behind the issue.

Each and every spouse should find what is good in the other person and be grateful for that. It is a myth to think that healthy couples don’t argue. The bad communication includes constant criticism, contempt, defensiveness and stonewalling. The solution to that is to take a break.

Ali bin Abi Taleb (may Allah be pleased with him) said:

“Know that life is like two days.. A day for you and a day against you. If the day is with you, then do not be arrogant, and if the day is against you then do not give up. Be patient because each day is going to eventually end.” patience is the key.

People tend to think that their spouse will never hurt them and this is a myth. Allah Subhanu wa Ta’aalah says:

” O you who have believed, indeed, among your wives and your children are enemies to you, so beware of them. But if you pardon and overlook and forgive – then indeed, Allah is Forgiving and Merciful. (Qur’an 64:14)”

The solution is to forgive: repel the evil with goodness.

Finally, Dr. Awaad gave some advices to the woman and man. She asked women to use their powerful influence, accept their husbands as the leader of the house and make them feel they are the men. Men also should show mercy and passion towards their wives, practice on their listening skills, do not overreact and be patient.