Dr. Jamillah Karim spent most of her time talking about her life experience as a Muslim African American woman in the US. She explained that the African American Muslim woman has been an educator in the history and that she has impacted and enriched the African American heritage. She encouraged women to be influential in their society and be loud in asking for their rights.

According to Karim, men are falling in short, especially when they do not engage women in the community work. Men tend to teach their religious interpretation from male perspective and it might be hurtful to women and to the society in general to have just masculine rhetoric when it comes to religious affairs.

Hope is always there

The American Muslim author stressed the importance of having women presentation in public. She is also expressed her happiness that some of the scholars started to teach and preach the importance of  women’s role in the Islamic community.

For instance, Omar Soliman has mentioned Dr. Karim and quoted from her book: American Muslim Women: Negotiating Race, Class, and Gender within the Ummah in his research.

She said that society tend to suppress women and shut their voices although they – as mothers – are the ones who transmit the religion to the men. Ms. Rashad called for social justice and encouraged women to teach by example.

“To acknowledge our ancestors means we are aware that we did not make ourselves, that the line stretches all the way back, perhaps to God; or to Gods. We remember them because it is an easy thing to forget: that we are not the first to suffer, rebel, fight, love and die. The grace with which we embrace life, in spite of the pain, the sorrow, is always a measure of what has gone before.”

Ms. Leasha Prime started her speech by talking about the sisterhood in Islam. She remembered the Prophet Muhammad peace be upon him who surrounded himself with strong women who were very influential. “Sometimes, we think of the women at the time of the Prophet peace be upon him, as weak, passive and slow, but no! They were activists, strong warriors and knowledgeable da’yeahs”

The power of Muslim women

Prime recalled the time when she embraced Islam, she was a teenager and she found herself surrounded by strong Muslim women who taught her the religion. She felt that she has a responsibility to contribute to the Muslim community. Therefore, she has established the Sisterhood in Action Website. 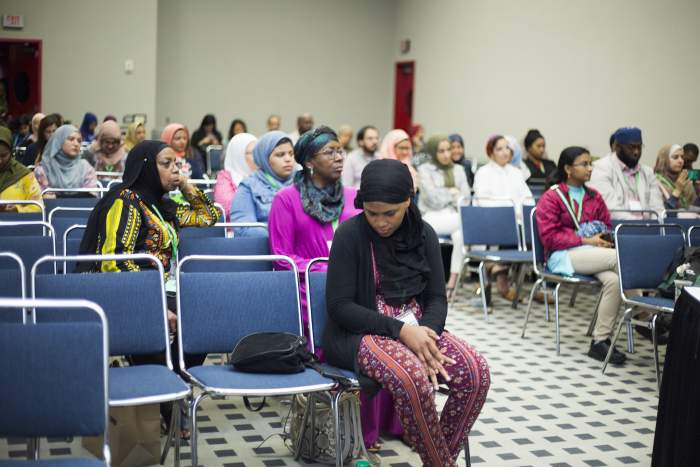 The website is a comprehensive resource for women who want to know about the religion from a woman’s perspective. It also discusses and deals with the issues and challenges of Muslim women.

“How can you be passionate as Khadija but as fierce as her?” Ms. Prime asked. She then answered: “by being unapologetic.” by building the civilization. She continues: “Do not worry what other people say.” Women have a lot more power than men because men came out from the wombs of  women.

She acknowledges that men cannot live without women and vice versa, so in order to call for the rights of women, men and women should be brought to the round table and negotiate until women can establish their opinions and be heard.