In a remote area of northern Yemen, many families with starving children have nothing to eat but the leaves of a local vine. Mothers boil tree leaves into a sour, acidic green paste and feed their hungry kids; a food that does harm more than good but at least, it fills those empty stomachs.

International aid agencies have been caught off guard by the extent of the suffering there as parents and children waste away.

The main health center in Aslam district was crowded with dozens of emaciated children during a recent visit by the Associated Press. Excruciatingly thin toddlers, eyes bulging, sat in a plastic washtub used in a make-shift scale as nurses weighed each one. Their papery skin was stretched tight over pencil-like limbs and knobby knees. Nurses measured their forearms, just a few centimeters in diameter, marking the worst stages of malnutrition.

At least 20 children  have died of starvation already this year in the Hajjah province. However, the real number is likely far higher, since few families report it when their children die at home, officials say.

Malnourished children who are treated often go back to villages with no food and tainted water, then return to clinics in even worse condition — if they make it back at all. 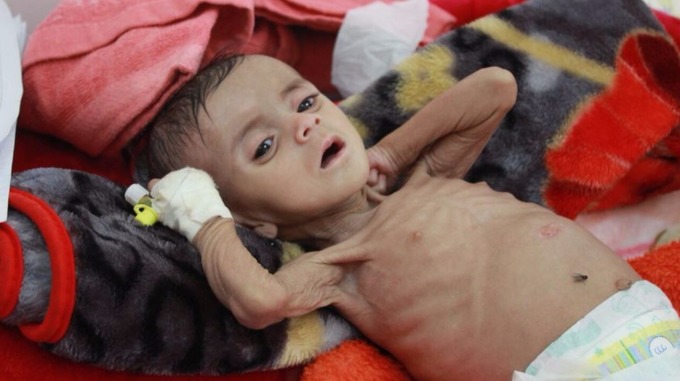 Around 2.9 million women and children are acutely malnourished; another 400,000 children with severe malnourishment are fighting for their lives only a step away from starvation.

According to U.N. figures, the number of people nationwide who would starve if they didn’t receive aid grew by a quarter over the past year, now standing at 8.4 million of Yemen’s 29 million people. That number is likely to soon jump by another 3.5 million because the currency’s falling value leaves more people unable to afford food, the U.N. warned this month.