It is true what they say, that things we take for granted could mean so much for other people.

Getting ready on that morning, we didn’t realize what kind of impact we would have on those children.

Our team consisted of five women from different Egyptian governorates. In a visit to the small town of Metoubes, our aim was to distribute 27 backpacks and school supplies among the children.  We also prepared for workshops on raising their self-esteem and  passion for learning. The expenses of the purchases were covered by the Peruvians living in Egypt.

Metoubes is a town located in the northern part of Kafr el Sheikh Governorate of Egypt with a population of approximately 32,000.(2006).

The sky is of a beautiful shade of blue engulfed in thick clouds of different shapes. Reaching towards it are ripe date palm trees, straining from the weight of the ripe dates waiting to be plucked. 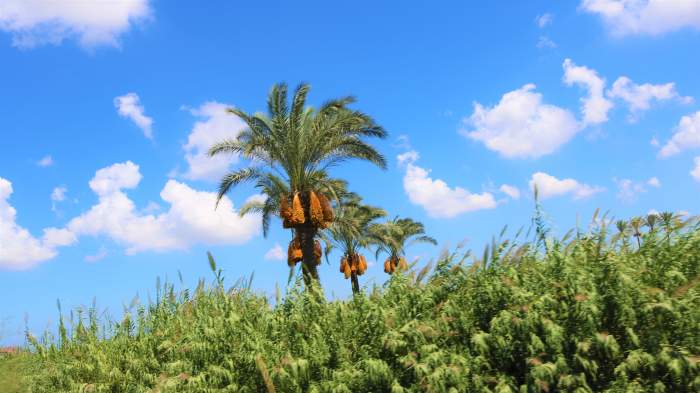 The styles of the houses are a mix of both modernity and simplicity. The sizes of the shops are smaller in size compared to that of the city. The street is filled with mostly men going about their daily routines; the women are found purchasing food stock for their homes.

When it comes to education, the schools are gender segregated. This type of segregation is the norm here. As soon as the children came in, parents were worried as to where the boys will be placed.

Jossyln, a Peruvian social anthropologist, who organized the workshop had already divided the children into two groups according to their ages however, she didn’t anticipate the reluctance of parents in regards to having boys and girls in the same class.

After series of convincing talks, some of the parents finally went home but that didn’t stop one concerned and overprotective father, lurking outside the door and frequently checking on his daughter. 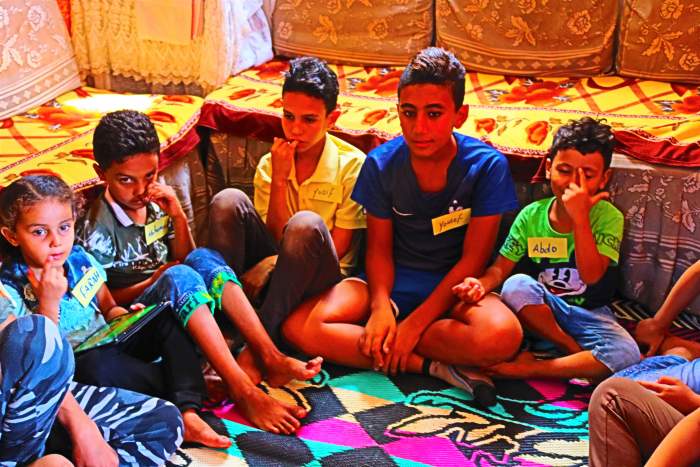 Other parents were concerned about the idea of taking pictures, at the end, we came to an agreement to blur the faces of the older girls or shoot from behind without exposing their faces.

The first group consisted of children aged from five to nine years.  It was organized by Josslyn and Noha, an agronomist who acted as an Arabic translator to the kids as the Peruvian instructor wasn’t a fluent Arabic speaker.

The second group was of children ranging from 13-17 years of age and was organized by Maryam,  a linguist of Al Azhar Univeristy and Sahar, a pharmacist.

I was the photographer and was mainly behind the scene, which gave me the perfect opportunity to fully focus and notice the ways each of the children are absorbing the information.

There was one girl in particular in the older group, she was so eager, focused and bright eyed, repeating and nodding along to the instructors. It was very apparent that she wanted to soak in as much knowledge as she could.

In the beginning the little kids were mesmerized by this foreign creature of sun tanned olive skin and energetic personality. It was very different to what they used to seeing.  There was a mixture of feelings in the air; confusion, curiosity and eagerness. 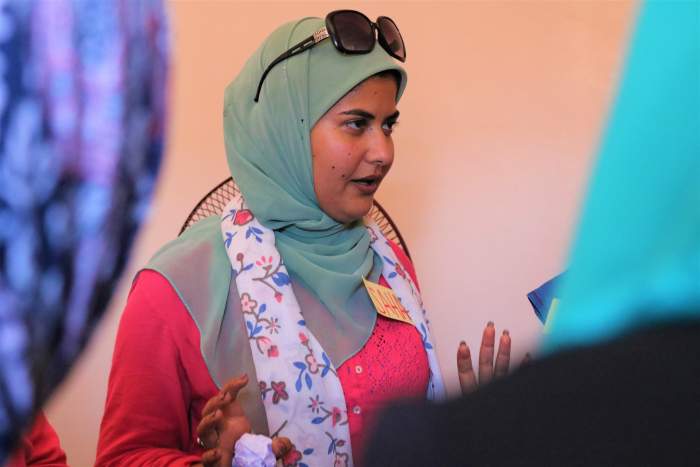 The activities for the younger ones included charade game that taught them about bullying.

Across the room, the older ones had to listen and repeat what the instructors say both in English and in Arabic. They also played mirroring games which allow them to describe their face features only in English.

One of the instructors for the older ones was very, motivating and energetic which in turn allowed the kids to feed off from her energy. She had short talks with each child at the end of the activities.

One of the kids said she was forced by her mother to come however she didn’t regret coming.

The workshop was a success and it left us with a sense of fulfillment and accomplishment that we were able to leave an imprint and a positive mark on these children.