The humanitarian crisis in Yemen has devolved into a “deepening catastrophe” with most of the country’s population in desperate need of humanitarian assistance, three United Nations agencies recently said.

The World Health Organization, UNICEF and the World Food Program said in a joint statement that the situation in Yemen has become “the worst humanitarian crisis in the world,” and the reality on the ground is likely worse than current international assessments suggest.

Some 75 percent of the country’s population is in need of humanitarian assistance, the agencies said. That includes 11.3 million children whose survival, the agencies say, is at risk without such aid. Sixty percent of Yemenis are food insecure, and millions lack access to basic sanitation and clean water.

The country has been locked in an ongoing civil war between the Saudi Arabia-backed government of Yemeni President Abd-Rabbu Mansour Hadi and the Iran-backed Houthi rebels since 2015.

The humanitarian crisis in Yemen was exacerbated last month when a Saudi-led coalition tightened its blockade of Yemen after the Houthis fired a missile toward Riyadh, the Saudi capital. The blockade cut the country off from humanitarian assistance, and prompted international pressure on the coalition to allow international aid into Yemen. 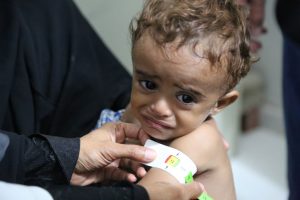 Yemeni Kids Starve to Death – What Are You Doing? 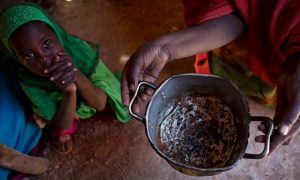