With a bag full of Barbies, Rami Adham walks over 12 hours into war-torn Syria across the Turkish border.

The 44-year-old father of six, who has lived in Finland since 1989, is originally from Aleppo. For the past four years, he has been making this perilous journey in order to distribute medicine, money and, most importantly, toys to the children of war-torn Syria.

“I started going to Syria in early 2012 to deliver aid. I wanted to see my people face to face, to see exactly what they need.”

It was while preparing for that trip when Adham’s three-year-old daughter suggested he bring the children some toys.

“She said if you are going to meet kids in Syria you can’t go empty-handed.” 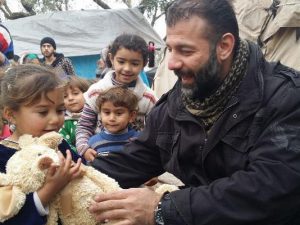 Adham tried to explain to her that he couldn’t buy every child a toy.

“She went into her bedroom and collected all her toys. She put them in an Ikea bag and said, ‘Here you go.'”

“Kids, it’s their job to play their job to have fun,” Adham tells Tremonti.  “So when they were deprived from security, playgrounds, schools…  and often times their own parents, they were left with no hope.”

Adham has made 28 trips into Syria and has distributed over 20,000 toys to children in Aleppo and surrounding refugee camps.  He says “words can’t describe” the feeling of handing out toys to children living through a war.

“[It’s] the least I can do to restore some of their childhood.”

Adham now heads up the Finland Syria Community Association, which collects donated toys from children across Europe, sponsors over 400 orphans in Syria and runs three schools in different refugee camps.

“The kids don’t care how much money you have. All they care about is a handful of candies, and a toy,” Adham said.

“Why do I do this? The smiles I get back. It’s the beautiful positive atmosphere that we create. Giving them a glimpse of childhood, the glimpse of hope, some joy to their heart.”

“With that I see it as if I am protecting, or preserving, or investing in Syria’s future.”