Three years on after Ghouta chemical attack which resulted in a tragic human life loss of 1,400 innocent civilians. A third of them were children, gassed to death during the early hours of the day while they are asleep. And the world has done very little about it. Artino, a war photographer, rushed to the scene. This is his story.

“In August 2013, I witnessed the now infamous chemical attack in Ghouta. I was woken in the middle of the night with news of a gas attack. The next morning, despite several warnings not to go, I went to investigate myself. Nothing prepared me for what I saw: children, babies lying on the floor in their pajamas, so still and calm with no visible signs of injury. They looked like they were sleeping but all around was mayhem: everyone was screaming and crying, but the children were so still and other-worldly. I noticed their strange complexions; they had fluid coming out of their mouths and eyes. They were all dead. They say more than 400 children were killed.

I was paralysed. I could not move, let alone take a picture. As the feeling of nausea ebbed away, I found a doctor and I asked him: “How can you be sure this is chemical and not a normal death?” He himself was in shock, his colleague had died after inhaling the sarin gas. He carefully showed me the dark blue colour on their skin; the foam and vomit around their mouths were the signs of asphyxiation. 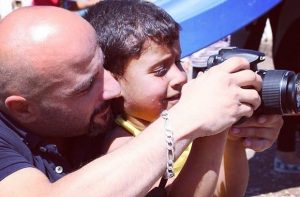 The bodies were laid out in schools and mosques, rows upon rows of them. I wandered from one building to the other taking photos. Something inside me broke: so many victims, survivors hallucinating and gasping for breath. Hell came to Eastern Gouta that day. Barack Obama said that if Assad had used chemical weapons on his own people there would be no other option but to intervene. We are still waiting.

I persuaded my parents to leave Ghouta because the whole area was besieged by government forces. The siege was getting tighter and the food we had stored would not last long. None of us choose to abandon our homes, but sometimes we just run out of options. My parents are in their fifties and living in a warzone is a huge burden.”

Take action and save lives, by joining  the Syrian campaign or donating  to Muslim and international organizations that support Syrian refugees and citizens such as: Islamic Relief , Muslim Aid, Islamic Help, Muslim Hands, Zakat Foundation. If you can’t make it, make sure to spread word and raise awareness about the attacks nonetheless.

May Allah swt be with our suffering brothers and sisters everywhere, and may He make us the means for their instant relief.