For more than two decades, an American Muslim of Libyan descent has served as a foster parent to terminally ill children.

The ceaseless effort of Mohamed Bzeek to serve those children and ease their suffering has prompted some people to launch a campaign in the hope of giving back to this good-hearted Muslim man.

Bzeek has fostered more than 80 children in Los Angeles Country, half of whom were terminally ill.

In 1978, Bzeek, then a former marathon runner, came to the U.S. from Libya to study engineering. He met his wife here in the U.S., and became a citizen in 1997.

Since his wife died, Bzeek has cared for his foster children on his own, as well as his 19-year-old biological son who has a form of dwarfism and brittle bone disease which requires full-time care. Currently, he is taking care of a paralyzed six-year-old who is also blind and deaf as well.

“I know she can’t hear, can’t see, but I always talk to her. She has feelings. She has a soul. She’s a human being,” he said.

In December 2016, Bzeek had to undergo treatment for cancer and the experience profoundly affected him.

” I was diagnosed with colon cancer and I had to go to the hospital to operate on me one day before my birthday. I was so scared, I’m 62 years old, I was so petrified because I have nobody to go with me . I have to face the doctors I have to go to the operation by myself and they say “where is your family?”. My wife passed away “where is your son?” My son handicap, I was so scared, I felt what the kids felt. They are alone by themselves, this makes me do more for these kids because I was in their shoes”

His behavior has touched Margaret Cotts, who acted to launch GoFundMe with a view to helping this Muslim man for his dedication and love for those vulnerable children. 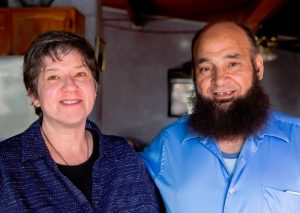 “When I read that line, I burst into tears. I was moved by his love and care for the most vulnerable members of our society — by his genuine kindness and compassion,” she said on her blog.

Cotts said Bzeek’s care for those ill children has helped her restore faith in humanity.

“I originally set out to help Mohamed, but in the end, the campaign ended up helping me,” Cotts said.

Inspired by Bzeek, Cotts also started working on a website about low tech communication for people who can’t speak.

So far, the GoFundMe campaign has drawn donations from more than 7,000 people from around the world, who have donated more than $390,000 to give back to this Muslim man who has given so much.

“Thank you, Mohamed. The world is a better place because you are in it,” Cotts said.

An Inspirational Muslim Gives Back by Feeding the Homeless

This Group of Muslim Women in South Florida Rocks!