According to the latest UN report, the Burmese Rohingya Muslims are recognized as one of the world’s most persecuted minorities, stateless and oppressed people living in constant fear.

In the last few years, thousands of Rohingya Muslims living in Myanmar have become displaced and with increasing restrictions on their freedoms, over 100,000 have fled the country.

Since 25 August, more than 18,500 Rohingya, a largely Muslim ethnic group, have fled into Bangladesh from Rakhine state. However, UN sources say they believe the true figure is closer to 28,000.

Recently,  700 Rohingya homes have been destroyed in one village and fires were burning Muslim homes in 100 Kilometer stretch by Burma military.

It’s really heartbreaking to stand helpless, watching our fellow Muslims facing all kinds of persecution while we can’t do anything to help them. However, we can use social media to draw the attention of the world to those persecuted Muslims and call for an action. 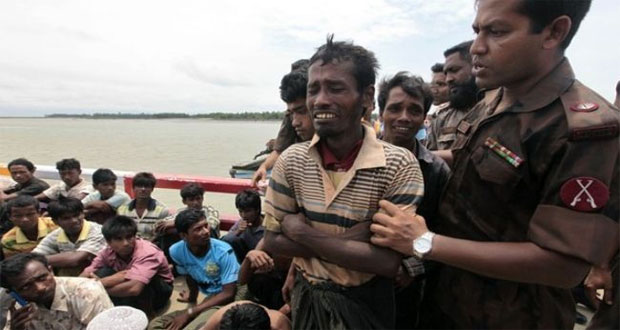 Here is an action plan shared by Abdul Malik Mujahid on Facebook few days ago:

Call all of the following:

And if you can spare a little more time:

Call the Burmese Foreign Minister to stop attacks on Rohingyas.

Urgently send your ambassador in Burma to the Rohingya area.

Ask Bangladesh to welcome refugees who have no where to go

Rohingyas Muslims are indigenous people living in their ancestral lands.

They were always citizens until 1982 when their citizenship was taken away.

Seven Nobel laureates say they are subject to slow genocide.

Rohingya believe in peaceful struggle. Military is killing them and lying about it.