Adding to their endless plight in the Buddhist-majority country, Rohingya Muslim women were gang-raped by security forces in Myanmar, according to a UN report.

The report details mass gang rapes, killings and brutal beatings and the torching of homes and people in Myanmar’s western Rakhine state.

It was based on testimonies from more than 200 Rohingya Muslims, who have fled Myanmar to refugee camps in neighboring Bangladesh.

In the report, one Muslim mother recounted how her five-year old girl was killed while trying to protect her from rape by soldiers.

The report said one of the rapists pulled out a long knife and slit the child’s throat.

“I thought I would die but I survived,” the mother told investigators.

According to the report, five soldiers were taking turns to rape a 25-year-old woman after they had butchered her husband with a knife, when her eight-month-old son started crying because he was hungry and wanted to be breast-fed.

“To silence him they killed him too with a knife,” a 19-year-old woman witness told United Nations investigators.

Another 14-year-old girl told of how, after being raped by soldiers, she saw her mother beaten to death and her two 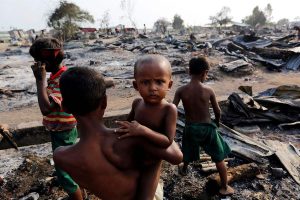 “These horrific attacks on Rohingya women and girls by security forces add a new and brutal chapter to the Burmese military’s long and sickening history of sexual violence against women,” Priyanka Motaparthy, a senior emergencies researcher at Human Rights Watch, said using the old name of Myanmar.

“Military and police commanders should be held responsible for these crimes if they did not do everything in their power to stop them or punish those involved.”

Considered as the world’s most persecuted minority by the UN, the Rohingya Muslims continue to suffer decades of discrimination and persecution in Buddhist-majority Maynmar.

Over the past decade, thousands of Rohingyas have been killed since violence broke out in 2008, forcing hundreds of thousands to flee their homes to neighboring countries.