As a severe drought deepens in Somalia, millions of people are left at the risk of famine  in the war-torn country. Somali authorities declared that at least 110 people have died of hunger over a two-day span in one region because of the drought.

Humanitarian agencies reports have also alluded to the worrying similarities, especially the 2011 famine in Somalia, in which over a quarter of a million people lost their lives.

According to humanitarian agencies, there are 6.2 million drought-affected Somalis in
need of assistance, including food, water and sanitation, health and nutrition, protection and shelter.

“Currently, approximately 6.2 million Somalis are in need of humanitarian assistance, of that number, three million are in need or urgent life saving measures,” Joseph Contreras, the spokesperson for the UN Assistance Mission in Somalia (UNSOM), said. 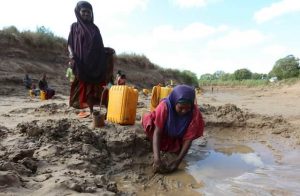 The UN says that nearly 950,000 children under the age of five will be acutely malnourished this year, with 185,000 of that number at risk of death without immediate medical treatment.

If a full-blown famine should descend on Somalia, the World Health Organization says it would be the country’s third famine in a quarter-century — and the second in less than a decade.

In order to address as many gaps in response as possible, humanitarian partners are rolling out a robust operational plan to reach as many Somalis as possible with lifesaving emergency support.

A massive increase in humanitarian assistance is urgently needed to avert a famine in some of the worst drought-affected areas of the country. Wages are collapsing, local food prices are rising, animal deaths are increasing, malnutrition rates are starting to rise, water prices are spiraling and Somalis are moving in growing numbers in search of food and water. Without assistance, many people face malnutrition, significantly increased risk of disease, loss of livelihoods and even death.

Islamic Relief is already on the ground responding to the impact of the conflict and drought.

They are pushing for long-term solutions in Somalia to break the repetitive cycle of drought and floods, delivering a $5 million borehole project to provide 36 sustainable water supplies across the region and installing underground tanks to store rainwater that currently runs wasted into the Red Sea.

Act now and help us to raise the much-needed funds to provide the people of Sudan and Somalia with food, emergency supplies and water to keep them alive.  End their hunger, quench their thirst and give them hope.

What your money can provide:

£90 can provide life-saving food and water to an entire family for a whole month.