At least 260 people were killed and 500 injured in the rebel held-enclave of Eastern Ghouta between Monday and Tuesday evening, the Syrian American Medical Society, SAMS, said on Wednesday.

The Damascus Media Center monitoring group said another 45 deaths had been reported in Eastern Ghouta on Wednesday.

The intensified bombardment in recent weeks of Eastern Ghouta, an area outside Damascus that has been besieged by the regime of Bashar al-Assad for years, has drawn international condemnation. 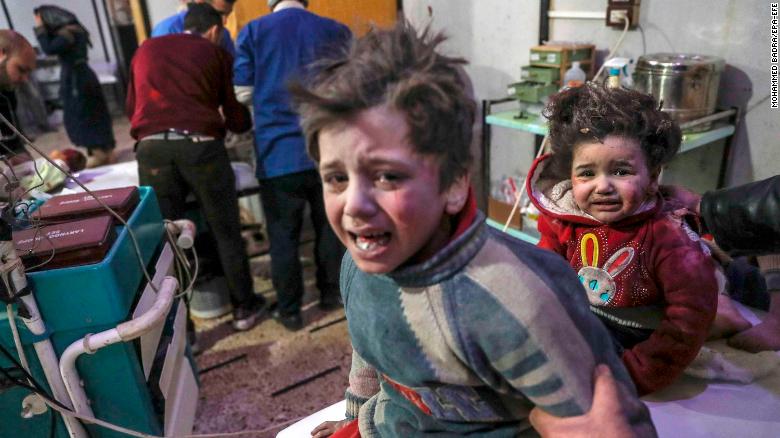 Amnesty International said “flagrant war crimes” were being committed on an “epic scale” there, and the UN children’s agency UNICEF published a symbolic blank statement, saying in a footnote there were “no words” to describe the suffering of children.

UN Secretary-General Antonio Guterres described it as “hell on Earth.”

Nearly 400,000 people are trapped in Eastern Ghouta, many of them in desperate need of humanitarian aid, according to the United Nations.

Deliberate attacks on healthcare continue in East Ghouta. Over the past three days, 20 healthcare facilities have been attacked in #EastGhouta, with two of these facilities attacked on two separate occasions. #SaveGhouta #NotATarget

A young boy cries after surviving air strikes in #Arbin city in #Ghouta . Most of the victims were children after 18 civilians were killed yesterday. Scenes like these have been repeated again and again. Let us hope they do not become commonplace in this world. #SaveGhouta pic.twitter.com/Mv4TQmCg36

Ya Allah,have mercy on the Ummah of your beloved Prophet ﷺ
Over 200 killed and 700 injured in Ghouta in past 48hrs.Nearly 2 million Syrians have been killed,imprisoned or injured since the crisis began 2011. pic.twitter.com/Mz4LMkw6L9

This would be my worst nightmare ? https://t.co/jOotvPMRzQ

The bombardment in Eastern Ghouta continues. Our team talk of the desperate situation on the ground. Please see how you can help >>> https://t.co/pw6lTIbc4g pic.twitter.com/cAB5dhLhPF

What you can do to help

Join one of the following appeals and donate now!