Studies show that autism is four to five times more common among boys than girls.
aaa

Fatimah chats with a brave mother, Umm Ali, who relates her powerful and touching journey of both her sons being diagnosed with autism.

Umm Ali’s journey with autism began in early 2010 when her second son was born. Her eldest son was just little over 14 months old.

In hindsight, it was an extremely overwhelming period for her family. She was adjusting from being a young wife to a mother of two young boys. Several months after she brought her second son home, she noticed that her eldest son was withdrawing from his environment and engaged much less with herself.

Soon, more severe traits of autism started to appear. The once verbal toddler- who had just started saying basic words like mama, dada etc. became a silent child; it was as if her son was trapped inside his own body. She felt as if he was not the son she once knew. He started making different “growling” noises and stopped making eye contact or communicating verbally with his parents.

It was as if he was emotionally blank. He only ate specific foods. His sleeping patterns were erratic. He stacked anything he could get his hands on. They no longer recognized the little boy, due to strange attitudes emerging from him.

This was when she followed her maternal instinct and started to research her observations. After she managed to convince her husband that her son was not going through a mere “phase”, they met with several specialists, who were not entirely convinced that he was showing traits of autism. She found herself having to convince qualified doctors that there was something very wrong with her son.

Because Umm Ali’s son was so young, it was hard to get a diagnosis. Eventually at the end of 2011, he was diagnosed with Autism Spectrum Disorder. It was a bittersweet day. They sat in a tiny office at Red Cross Hospital, in Cape Town, South Africa after an intensive assessment was done and she was told by a Neurologist that her eldest son had ASD.

Autism is a lifelong neuro-developmental disability that affects 3 specific aspects of the individual:

1. Communication: how one communicates with others.

2. Social ability:  how a person relates to other people and how he make sense of the world around him.

3. Sensory: many persons, but not all experience over- or under-sensitivity to sounds, touch, tastes, smells, light or colors.

Some people with autism are able to lead relatively independent lives while others may have accompanying learning disabilities and need a lifetime specialist support. It is a spectrum condition, meaning, while all people with autism share certain difficulties, their condition will affect them in different ways.

According to “Autism Speaks”, an organization that deals in researching the disease has identified around 1 in 88 American children as on the autism spectrum–a ten-fold increase in prevalence in 40 years. Careful research shows that this increase is partly explained by improved diagnosis and awareness.

Studies also show that autism is four to five times more common among boys than girls. ASD (Autism Spectrum Disorder) affects over 2 million individuals in the U.S. and tens of millions worldwide. Moreover, US government autism statistics suggest that prevalence rates have increased 10 to 17 percent annually in recent years.

Umm Ali’s eldest son has been diagnosed with classical autism, which means he has the classical traits present in an individual with autism. Because it is a spectrum disorder, one finds different levels of severity and often in a young child that is diagnosed at an early age, and with intervention by therapists and other specialists in the field of autism, the child tends to move back and forth on the spectrum.

Her battle is only beginning

While Umm Ali was struggling to get a diagnosis for her eldest son, she started noticing similar traits in her youngest child who was little over a year old. She immediately started the long process to get him diagnosed as well. At first,, doctors thought she was being paranoid, as he was one of the youngest children at the time to come for a screening, but eventually they had to agree that he too had autism.

Umm Ali admits that her youngest son’s diagnosis was more emotional for her. She cried for days and days, and questioned her faith during these dark days. Her youngest son was diagnosed with a severe developmental delay, Autism Spectrum Disorder and Sensory processing disorder. He was diagnosed shortly after her eldest was diagnosed. Both her sons are non-verbal but Umm Ali happily admits that they have so much heart and personality,Masha’Allah.

Umm Ali says because autistic children do not adapt well to change, she has become a lot more structured and organized. Planning is everything in the life of a mum. She has shifted from career woman to a domestic warrior. A typical day includes using visual pictures to illustrate to the children what their day would be like. This is a system implemented at their school. They have a file that they carry with them and they use the pictures to build sentences to request their needs. 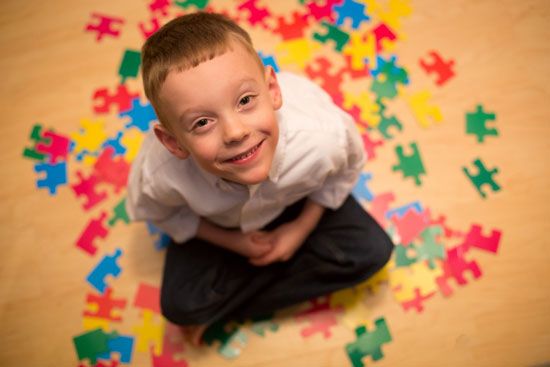 This also helps build vocabulary and places a picture to the words pronounced so that they build a reference to words. Because language is “invisible” they depend a lot on repetition of words and linking words to pictures so that they can grasp it.

Umm Ali explains by using the visual schedule which shows the boys in pictures where they will be going and what they will do when they get there, it thus eliminates the element of surprise and restricts meltdowns. After school, the rest of the day consists of therapies with various specialists.

Umm Ali dislikes painting everyone with the same brush; however, she believes that some members of the community’s tolerance of children with autism need to change. Her personal experience thus far has not been pleasant and there is a definite need for awareness about the disease. She would love her sons to become accustomed to going to the Masjid and even memorize Qur’an one day Insha’Allah. However, this requires a lot of tolerance and acceptance from the community allowing them to attend Madaaris, Islamic events etc. without scornful eyes around.

“If only they could be accepted with all their odd behaviors and without being made to feel as if they should not be there”, she says.

What makes this journey worthwhile

While the journey has so far been incredibly hard, Umm Ali points out that  it has definitely changed her for the better. Her defining moments include hearing her son speak again after losing his speech as a toddler. “The day my son acknowledged me and called me Mummy at age of 5 years and 10 months is the best moment of my life”, she says. She was also left amazed when earlier this year her father- in- law passed away and her son understood he was gone and cried, showing emotion and empathy. She and her husband were also reduced to tears upon seeing their eldest son walk up onto a stage in front of the entire school, introduce himself, and sing a song in a language only he could understand.

Umm Ali is adamant that her faith in Allah has made this journey worthwhile. She is no longer questioning why Allah placed her in this position. Instead, she thanks Him. It is because of autism, that she has been exposed to the greatest acts of kindness and humility, met the most amazing people and experienced the meaning of true love and perseverance.

“I am less judgmental, more compassionate, less controlling and more nurturing. I used to be career- driven, always looking for the meaning of life, a cause to fight for – this is my cause now”, she proudly emphasizes. Autism took the voice of my children away but I have become their voice.

A Son With Two Forms of Autism