The Night Journey and the Ascension, is one of those miraculous stories that we need to know about Prophet Muhammad (PBUH).
aaa

Editor’s note: In a narrative writing style, we present to parents the story of Isra and Mi`raj so that they can read it to their young kids during the occasion. With a soft voice and in a spiritual atmosphere, gather your kids and read to them this article, or you can even record it in your voice, so your kids can listen to it and imagine how magnificent the journey was.

Do you ever imagine travelling at night?

Admiring the stars in the dark sky and flying pass the moon?

Do you ever think of how amazing it would be to move from one place to another, in just a few leaps? I’m sure you do – because I did once too – I believed I could grow wings and fly from place to place without thinking twice.

Do you ever think of meeting the Prophets? Or even Allah the Almighty? How would that feel, if you could seek all this out in a blink of an eye?

Well, it happened to our Prophet Muhammad (peace and blessings be upon him) – though he didn’t grow wings. But, he had a miraculous journey where he was carried from one place to another and later, he ascended the heavens.

That is how special our Prophet was – Allah chose him for so many special reasons, and for him to experience the Mercy of Allah in many ways, so he would continue to lead us to the straight path.

Well, the Isra and Mi`raj, the Night Journey and the Ascension, is one of those miraculous stories that we need to know about Prophet Muhammad (peace and blessings be upon him) and Islam – especially when one special pillar of Islam was established then – our five daily prayers.

So, this is what had happened…

Beginning of the Journey

Our Prophet Muhammad (peace and blessings upon him) was sleeping at the Ka`aba one night, late in the month of Rajab. He loved sleeping there as he could feel the serenity of this special place of worship.

That was until he was awoken by Archangel Angel Gabriel, who was nudging him by his foot.

The Prophet and the Angel had already known each other well enough, of course, and the Messenger of Allah instantly knew that there was a special message awaiting him, especially if the Angel visited him in the middle of the night!

Before he knew it, Prophet Muhammad set eyes on an animal. It looked much like a horse, but it had wings – yes a horse with wings!

A flying horse, he must have thought. Imagine that, seeing such a creature nearby the Ka`aba. This was going to be a journey to remember.

Prophet Muhammad mounted Buraq – that was what the creature was called – and accompanied by Angel Gabriel they took a leap into the night sky – pass the clouds, pass the stars, into the darkness.

Prophet Muhammad (peace and blessings be upon him) looked down and realized how far away he was from the ground, but he never felt scared, as he knew this was special journey with special lessons and that Allah the Almighty had planned all of this for him and all the generations of Muslims to come – yes, all the way until us.

When they descended back to earth, Prophet Muhammad realized that he had reached the Masjid in Jerusalem and there waiting for him were all the other Prophets who had come to teach Allah’s religion way, way, way before Prophet Muhammad was appointed.

They greeted each other and the Prophet led them in prayer.

What a great congregation that must have been – all these Messengers and Prophets praying together to worship Allah and Allah alone.

Then Angel Gabriel approached Prophet Muhammad with two vessels – one with milk and one with wine, seeing which he would choose. The Prophet chose the milk and drank it – upon this, Angel Gabriel knew that the Prophet had passed a special test, because he had chosen the drink that was good and pure for him, and not the other one, which was forbidden on earth. 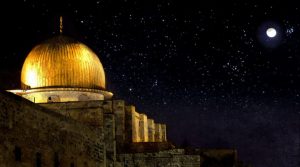 Do you ever think of how amazing it would be to move from one place to another, in just a few leaps?

But the journey was not over yet. It was time to ascend to the Heavens.

Angel Gabriel led Prophet Muhammad and Buraq once again, and they travelled upwards to the Heavens. I don’t know how much more amazing a journey can be, considering the different levels of the skies when travelling into the night! It must have been a scene so picturesque that Prophet Muhammad may have committed all to memory! After all, he was the only Prophet to have travelled this way…

As they moved into the Heavens, the Prophet met several of the other Prophets at each level and they exchanged their greetings of peace.

Just like us, we are all of one brotherhood of Islam – and Islam only allows us to give greetings of peace from one Muslim to another. Furthermore, they were no longer on earth, but in this special place for believers only – only good people are entitled to go to heaven, as per Allah’s decisions.

Right at the top, Prophet Muhammad met Prophet Abraham, who was leaning on the Lute Tree. This tree is said to be the end of worldly knowledge – and that reminds us how only Almighty Allah (knows everything there is to know about the universe.

The gift of prayers

Allah revealed to our Prophet that Muslim believers were to engage in 50 prayers every single day. Prophet Muhammad agreed and began his descent through the Heavens. As he was on his journey back down, he met with Prophet Moses, who was worried at the large number.

After a few trips, there were only 5 daily prayers and Prophet Muhammad (peace and blessings be upon him) told Prophet Musa that he was too shy to ask for anything less.

Hence, here we are today, with our second pillar of Islam, the five daily prayers. That is why we must try our level best to always fulfill them on time and with great accuracy, because Prophet Muhammad did some hard work in helping us to establish such a small number of prayers, and of course Allah in all of His Glory, allowed us to do this.

We should be ever grateful for such a beautiful and simple religion!

Angel Gabriel brought Prophet Muhammad back to Makkah and they bypassed a caravan, which was on the way there. 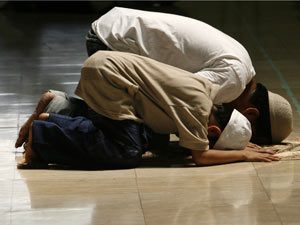 We must try our level best to always fulfill our five prayers on time and with great accuracy because Prophet Muhammad did some hard work in helping us to establish such a small number of prayers, and of course Allah in all of His Glory, allowed us to do this.

In the morning, Prophet Muhammad (peace and blessings be upon him) excitedly told the people of Makkah about his Night Journey and Ascension – and everyone, except a few of his beloved friends – laughed at him.

He was mocked and bullied and called a mad man, but to their surprise, Prophet Muhammad (peace and blessings be upon him) could answer their questions about Jerusalem and the caravan that he passed, arrived as he told them.

Still, the disbelievers refused to believe him and continued to deny this miraculous message. Of course, there were those who stood by him – and this is a good reminder for us too.

Sometimes we will run into people who are awful to us because they think it is silly to be a Muslim or to pray five times a day.

Never forget that no one was bullied as much as Prophet Muhammad (peace and blessings be upon him) during the time he spread Islam – and God-willing, Allah the Almighty will always provide us with friends – good friends – who will stand by us, and take care of us, and always remind us that there’s nothing to be worried about when Allah is with us.

The Night Journey and the Ascension is a wonderful story to remember.

We are told of things that we can only dream of, but for Prophet Muhammad, they were very real, and he came back to earth to share his tale so we will always continue to walk on the straight path, and love Allah for all the reasons of his Mercy that has been showered endlessly on His believers.

The Night Journey: Sometimes it Causes Me to Tremble