Growing up in North Dakota in the 1980s and 1990s, there was nobody who shared my family’s last name. “Husain? Hoooooo-sayn? You’re not related to … ?” teachers would sometimes ask.

No, I would explain, I wasn’t. My name was spelled differently from the then-dictator Saddam Hussein, and, either way, it’s a very common name in the Middle East and South Asia.

Sometimes teachers would half-laugh; sometimes they would just look me over with a hint of skepticism. If they had taught one of my brothers before me, I could guess I was pretty much in the clear. But, if the Husain family was unknown to them, I never knew which way it was going to go. My best bet was to lie low and be a good, diligent student.

I was entering 10th grade at Central High School in Grand Forks, North Dakota, when the first Gulf War broke out. I was one of the only Muslims and brown kids there (save for my older brother, who was a senior in the same high school; there were some American Indian students as well).

Grand Forks Air Force Base’s high schoolers came to Central, and it seemed like every third kid had some relative who was serving a tour in the Gulf War. This made for several uncomfortable jokes at me and my brother’s expense, some anonymous and ominous calls to our home, and even a threatening note or two pushed into my locker—notes that my brother confiscated before I could read what they said.

It was an uncomfortable time. I was the girl who wore sweatpants instead of the standard shorts in gym due to my religion’s modesty requirements (and my mother’s insistence) and the one who never attended school dances. My brothers and I were the ones who fasted in Ramadan (“What? You eat nothing from sunrise to sunset? You don’t even get to drink?”), hanging out in the library or the guidance counselor’s office while our friends ate in the school cafeteria.And yet, for the most part, we still felt like a part of our small-town community—I didn’t feel ostracized.

I had lived there essentially my entire life. We had moved to Grand Forks from Northern California when I was a toddler, for a tenure-track position my father accepted at the University of North Dakota. Upon arriving in Grand Forks, my mother says she was overwhelmed by a feeling of loneliness.As the family story goes, my father promised her we would only stay for a few years.

We ended up living there until I was 16.I often think about all my parents went through, the compromises they made while holding fast to their faith, traditions, and values to raise us as practicing Muslims and proud, assimilated Americans.

Little-league baseball games, piano lessons on Friday afternoons, band practice, marching in the annual Potato Bowl parade, trick-or-treating in our neighborhood, and also: praying together as a family, reading the Koran in the morning before leaving for school, teaching us about our faith, all without the benefits of Islamic Sunday School, a local mosque to go to, or hardly any books or curricula to follow.

Nearly 30 years later, with three children of my own—two in high school and one in elementary school—it’s amazing to compare what my parents strove to do back in the 1980s and 1990s as immigrants who became naturalized citizens with how I am raising my children now.Generally, there have been three different eras for Muslim kids growing up in America in recent decades.

When first-generation or immigrant Muslims were growing up in the 1980s and ’90s, the focus was on assimilating as much as possible while trying privately to hold onto culture and faith.Then, in the years immediately following 9/11, kids who were coming of age received a different kind of messaging, a particular mix of pressures: to condemn terrorism, express their patriotism, and sometimes downplay their Muslimness.

Today, for my kids, with 9/11 more than 15 years in the past, they are facing something wholly new: an era when it’s encouraged to be unapologetically Muslim while at the same time staking claim to their Americanness.

I remember the years immediately following 9/11, soon after I had begun covering American Muslim communities, particularly in New York, where I lived at the time. In her recent book Muslim Girl: A Coming of Age, Amani Al-Khatahtbeh, the founder of MuslimGirl.com, talks of the burden of being Muslim in the wake of 9/11, writing of living in a time of endless suspicion and constant demands to prove her patriotism.

In recalling a conversation she had with someone who wasn’t Muslim, she writes, “I hope she knows my pain is genuine, I thought. I hope she doesn’t doubt that a Muslim American can be this impacted by 9/11, too. The truth is that 9/11 never ended for us.” 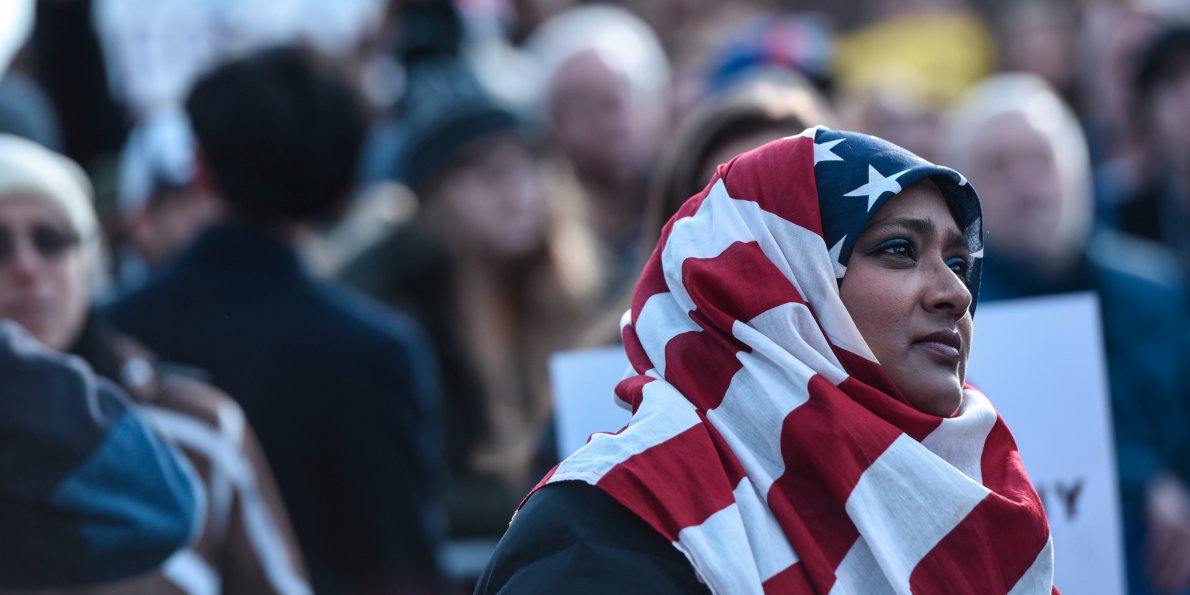 In the years since, I’ve seen a shift among the American Muslims I talk to in my own reporting—a shift that mirrors what I’m trying to impart upon my children: more pride, more strength, and more self-advocacy. As my 17-year-old niece put it to me recently, “I’m not going to apologize for who I am.”

She told me that when kids look at her in school, with her hijab, they sometimes make assumptions about who she is. But she’s uninterested in their “bad answers” about her identity.I love this fierceness I see in her and my children, but like many American Muslim parents, I worry, because they have to carry themselves with caution and care, given the tide of rising Islamophobia and hate crimes.

In the last week of Ramadan, in June of 2017, on Laylatul Qadr, one of the holiest nights of the month, a 17-year-old named Nabra Hassanen was brutally murdered during the wee hours of the night as she left a McDonald’s (perhaps after eating her pre-fasting meal) with a group of friends to return to the All Dulles Area Muslim Society Center (ADAMS Center) in Sterling, Virginia, for nighttime worship.

The police called it road rage. Many Muslims cried hate crime. And, many of us wondered what the journalist Hannah Allam articulated in her Buzzfeed article about Nabra’s funeral: “What kind of America is this … where a teenage girl can be brutalized on her way to the mosque with a group of friends?”

Muslim American parents I know were shaken by the story. We asked each other, is it any better now than when it was when we were being raised? How do we protect our children from bullies and hate? In some ways, our childhood days when we were quite the outsiders feel like an easier time than what our children are navigating today.Polling numbers, too, give American Muslim parents plenty of reason to be concerned.

A survey conducted by the Institute for Social Policy and Understanding studied bullying in American schools by conducting about 2,400 interviews with parents. It found that 42 percent of Muslim parents reported their kids being bullied due to their religion at least once in the past year.

In California, 55 percent of American Muslim kids reported being the victims of bullying, twice as high as national bullying statistics.And yet, at the same time, in my 16 years of as a professional writer and editor coordinating coverage of American Muslim communities while parenting three children, what I’ve witnessed is that though the concerns we impress upon our children respond to the particular tensions of any given moment, some things remain fundamentally the same. We want them to love their faith but be safe and protected.

We want them to be part of the collective American experience, but hold onto their culture and faith.Recently I picked up my 14-year-old daughter after school, when she had stayed late to attend a meeting for girls interested in trying out for her high school’s soccer team. She had played five years for private club teams on and off and was considering getting involved with high-school sports. I sensed immediately something was wrong when she got in the car, and we drove in silence all the way home.

Parked in our garage, I asked her, “So are you going to tell me what is wrong?” She sat in silence, trying to control herself and her emotions. “Come on,” I said. “What is it?”“They’re all so … so … white! All the girls at that meeting were part of some group that I could never be part of. They were in their shorts, all sitting together. They looked at me like who are you? What are you doing here? I felt like such an outsider.”

I reminded her that on her club teams, she often was the only brown girl there, and the only one who, upon my insistence, wore leggings underneath her shorts (some things never change). That though things felt awkward at the start of every season, she found her way to becoming part of the team. I told her not to let others push her around, even in her own mind. That she was strong and perfect just as she was.

“I know, Mamma,” she told me. “But this was different. There was a wall. I could feel it.”I thought back to what my folks would try and convey to me in how they raised me, encouraged me, and in what they did and didn’t allow me to do. We assimilated wherever my parents felt it appropriate—watching college hockey games on Friday and Saturday nights with the whole of Grand Forks, joining the track team in junior high (still wearing my sweats), playing in band and jazz band.

The practice of our faith was also maintained, with (among other things) gathering for our ritual prayers as a family at home and maintaining a halal diet in a landscape where buying halal meat and products was an enormous challenge. But in some ways, our religion was something we did quietly. The hijab was hardly seen back then, at least in the Midwestern communities I frequented. “Be unapologetically Muslim” was not something I heard at all growing up. The message was to be quietly, not loudly, Muslim.

But it’s different today. I am teaching my children to be unapologetically Muslim and American. That they have as much right to be who they are outwardly and inwardly as anyone else in this country. That they are responsible for themselves and to be good citizens and human beings of this country and this earth. That they do not need to be apologetic for whatever evils and transgressions others may commit in their cruel twisting of the Muslim faith.

I lay the examples of women like the Olympic fencer and medal winner Ibtihaj Muhammad, or Dalia Mogahed, a prolific speaker and the director of research at the Institute for Social Policy and Understanding, in front of my kids. My husband and I include them in local interfaith and public-service efforts and take them to political events to learn about the campaigns of potential state representatives.

My messaging to them is to promote self-confidence and self-worth in hopes of alleviating the feeling of being “otherized,” something I internally struggled with in my childhood. This is why my daughter’s experience at soccer tryouts took me aback. Because, I realized, there is still much more work to be done.

Published with kind permission from The Atlantic.

We Are American Muslims and We Are Here to Stay

Coping with Microaggressions – A Guide for American Muslims