Muslim parents need to calmly take a step back and acknowledge that teenagers are heavily imbued in a hyper-sexualized environment.
aaa

Iblis (satan) refused to participate in the ceremonial prostration towards Adam (PBUH), and was thus cursed by Allah (SWT), banished from the comfortable abode of Jannah. Humiliated and dejected, Iblis hatched a plan of revenge against Adam (PBUH) and Hawwa, luring them to the forbidden tree.

After repeated waswasa (evil whisper), it worked. Our parents ate from the tree, and their clothes of Jannah were pulled away. They were humiliated (and removed to earth), and that was what Iblis had wanted.

Until today, the same Iblis runs amuck, pulling off the clothes of the Children of Adam, well knowing that nudity, lewdness, and promiscuity, undermines the decency of human beings. And while we look around us, we see that society at large has consumed Iblis’waswasa (evil whispers) including the ummah of Muhammad (PBUH).

While Muslims culturally shy away from sex education, the resounding reminder from the Qur’an of the origins of our existence and the environment that we live in today forces us to speak to the youth about sex in the context of Shari’ah. This is not only to have them abstain from the same, but knowledge and open communication inevitably curb sex crimes against the youth, and predominantly against women / teenage girls.

What should parents do?

In this hyper-sexualized world, acknowledging just a handful of realities will help uphold the decency of Muslim teens, as they navigate through the bizarre teenage phase of undulating hormones and changes in their bodies.

“But that’s haram!” is a common response from panic-stricken parents when they realize that their children are exposed to a lot more of sex – and sex outside the sanctity of marriage. While they may not be engaged in the deed, children asking about dating, promiscuity, homosexuality, and pornography, tends to incite the: “Shuushhh! We don’t talk about that!” gut response from parents.

While not belittling the haram, this type of reaction often brings more bad than good when dealing with the curiosity and sex education in general. Shunning out inquisitiveness only pushes teens to look for answers from “other parents”, peers, older teenagers in the neighborhood, or google.

Instead, Muslim parents need to calmly take a step back and acknowledge that teenagers are heavily imbued in a hyper-sexualized environment, and if they constantly see a dichotomy between their parents’ values and what they perceive as a norm – and the former is the one freaking out – they will easily be pushed into normalcy of sexual activity that is haram.

This is time to open lines of communication with them, to discuss their concerns as-a-matter-of-factly, and explain everything in context (of the Quran and Sunnah), without panicking too much. 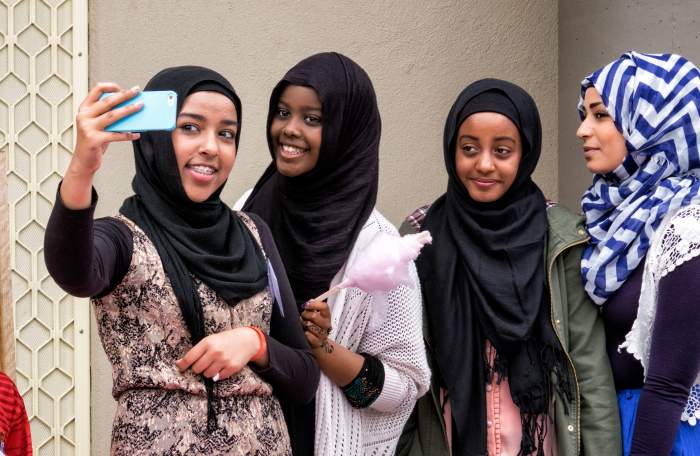 Acknowledge that building a positive body image is very difficult

The irony of being Muslim is that our dress code (of covering more) is often associated with shame, by Muslims and non-Muslims alike. However, it is contemporary culture that insinuates shame through perpetuating the perfect body image through advertizing and media.

So, acknowledge that due to this overwhelming influence of having to define physical beauty, it can become very stressful for the Muslim youth to really be confident of themselves and not succumb to sexual validation and peer pressure.

If there is one thing that can chance this perception, is the importance of dressing modestly. Clothes in Islam are associated with honor and respect and part of building a positive body image.

In fact, Iblis’(satan) plan to ambush humans from the front, back, right and left, left one avenue open for guidance – the route from above. And Allah ta’ala tells the Children of Adam in His eloquence, that clothes come from above. This beautiful reminder plays an important role as to how we perceive our clothes, as gifts from Allah (SWT).

Understanding this will help Muslim teens understand that a positive body image does not have to do with dressing more scantily or exposing more. What greater honor of a positive body image can one cultivate, through beautifying one’s self through dressing presentably? The Qur’an makes apparel one of the halal means of enjoying this world (and clothes do not have to be expensive to look nice).

Honor and modesty go hand in hand with loving one’s self, and that is the best body image one can cultivate, after understanding Allah’s definition of beauty – inward and outward.

Unlike more orthodox faiths where sex is seen as solely as the means of procreation, Allah ta’ala makes sexual pleasure halal and a rewarded deed, for those who engage in it within the sanctity of marriage. This is important to acknowledge with the Muslim youth as it honors the institution of marriage for both husbands and wives, as the Qur’an describes both as garments for each other – to protect, provide comfort, and to beautify.

This sends the message that sex is not dirty or shameful, a perception that can inevitably cause stress upon married couples when they do not encompass the entirety of sexual relations within marriage. The youth should therefore understand – and look forward to – sex as their right (and responsibility) for both pleasure and procreation as sanctioned by Allah Himself.

At the same time, it’s important to speak without shame about procreation: from family planning, pregnancy, birth, and breastfeeding – as all of these are also part of the honor of human beings in continuing the plight of humanity.

Acknowledge that taming the nafs is a challenge on its own

It’s good to be honest with the youth: it’s not easy to simply lower one’s gaze and guard one’s private parts – shall we convey once again at how overwhelming sexual content is today? But the rewards of doing so are of abundance.

Helping the youth lower their gaze and guard their nafs includes talking about the issues at hand, about attraction to the opposite gender, finding good company, and channeling their time and energy towards healthy activities.

These activities do not necessarily need to be “Islamic” in nature, but at least focused on activities that stay away from the haram. Once the youth find the sweetness of all that is halal, it is the human fitrah, that they will slowly repel the haram.

Generally, good time management and good company keep the youth from falling into the trap of sexual desires, so activities that will help focus their energy on fruitful endeavors will inevitably help them in lowering their gaze and guarding their modesty. Ideally, this should be the norm for all Muslims, but again, with this hyper-sexualized culture, rewarding teenagers from keeping away from sexual activity and influences should become the norm to reinforce their steadfastness in doing so.

Acknowledge the Sunnah of Allah in Discussing Sexual Content

Learning from the story of Adam (PBUH) – Adam was the chosen as the father of humanity, but made possibly the biggest error in history, giving leeway Iblis to dehumanize his children into mere sexual objects until this very day.

Yet Adam (PBUH) repented and was forgiven for his own wrongdoing, and granted Jannah as his resting abode for entirety. This is a reflection of honor in the creation of the human race, thus an important reminder to parents to not lose hope in the Muslim youth amidst the fitna that plagues society with respects to sexual activity.

Allah (SWT) speaks openly about sexual relations in the Qur’an – with honor and respect for those that take place between spouses, and this speech is always beautified, and never explicit.

On the other hand, He also makes it very clear that zina and adultery are punishable offences, but of course – just as He kept it open for Adam (PBUH) – the door of repentance is widely open to any caller, at any time of the day and night. This keeps the faith in balance, and how it should be acknowledged by both Muslim parents and youth.