Fathers have an important nurturing role to play in their daughters’ lives. It only takes a glimpse into the Prophet Muhammad’s (PBUH) relationship with his fifth child with Khadijah (RA) to understand this.
aaa

We know from modern psychology that father-daughter relationships have a great impact on the lives of both parties.

Daughters learn what kind of man they should bond and form relationships with from their fathers.

And fathers learn how to be gentle, patient, and loving from their daughters.[i]

There is no greater father-daughter relationship than that of the Prophet (PBUH) and Fatimah (RA).

By studying how they interacted, we can model our familial relationships after them and see the many fruits that grow from it.

Fatimah’s affection for her father

Fatimah (RA) was born when her father (PBUH) began spending long periods of solitude in mountains around Mecca.

But this distance was not to be the pattern of their future relationship.

When she was just five years old, Fatima (RA) learned that her father had become the Messenger of God and she was among the first few privileged to accept that message.

When she was nearly ten years old, a group of pagan Quraysh approached the Prophet (PBUH) while he was praying in Masjid al-Haram.

“Menacingly, the group went up to the Prophet and Abu Jahl, the ringleader, asked:

‘Which of you can bring the entrails of a slaughtered animal and throw it on Muhammad?’ Uqbah ibn Abi Muayt, one of the vilest of the lot, volunteered and hurried off.

He returned with the obnoxious filth and threw it on the shoulders of the Prophet, may God bless him and grant him peace, while he was still prostrating.

Abdullah ibn Masud, a companion of the Prophet, was present but he was powerless to do or say anything.”

Fatimah witnessed this act of degradation as her father prayed to Allah (SWT).

But she didn’t let it embarrass or even frighten her, even at her tender age.

Drawing upon her immense respect and love for him, she stood firmly against this oppression, wiped the filth off her still praying father, and railed at the offending parties.

The pagan Quraysh, in shock at her reaction and brazenness, said nothing in return.[ii]

Fatimah continued to defend her father as he was attacked and suffered insult and injury at the hands of the Quraysh in Mecca.

How many of us as adult show our fathers this kind of respect? We can learn from Fatimah’s strength and loyalty what it means to be a great and noble child.

The Prophet’s fatherly love and affection

“There is a misconception that a father is merely the breadwinner, the supporter of the household, that his role is primarily that of financial provider rather than nurturer.

This misconception is detrimental to our community.

Fathers have an important nurturing role to play in their daughters’ lives.

It only takes a glimpse into the Prophet Muhammad’s (PBUH) relationship with his fifth child with Khadijah (RA) to understand this.

The Prophet (PBUH) had a special place in his heart for Fatimah (RA).

Fatimah, of whom Aisha (RA) commented, “[…] When the Prophet saw her approaching, he would welcome her, stand up and kiss her, take her by the hand and sit her down in the place where he was sitting.” 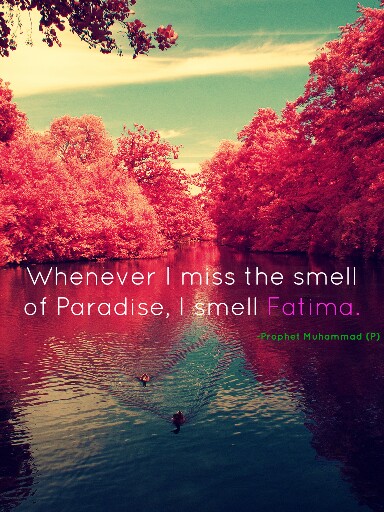 The Prophet showed his daughter great respect and dignity, teaching her, as well as the men around him, and even us today what good treatment to our daughters looks like.

How many fathers show their daughters this kind of attentions and dignity? Distance and dismissive behavior of a father toward his daughter has no place in the Islamic tradition nor in the life of Muslim families today.

The Prophet (PBUH) once said:

“Whoever pleased Fatimah has indeed pleased God and whoever has caused her to be angry has indeed angered God. Fatimah is a part of me. Whatever pleases her pleases me and whatever angers her angers me.” (Bukhari and Muslim)

Many fathers who create and sustain a healthy connection and relationship with their daughters will find that this is true for them as well.

The father-daughter relationship is one with many fruits

Not only did they have mutual respect and show each other every kindness, Fatima (RA) and The Prophet Muhammad (PBUH) were a great comfort to each other.

One day the Prophet summoned Fatimah. When she came to him, he kissed her and whispered in her ear. She wept.

Then again he whispered in her ear and she smiled. Aisha saw and asked, “You cry and you laugh at the same time, Fatimah? What did the Messenger of God say to you?” Fatimah replied:

“He first told me that he would meet his Lord after a short while and so I cried. Then he said to me: ‘Don’t cry for you will be the first of my household to join me.’ So I laughed.” [1]

Fatima could not grieve her father’s death long because she would be the next to follow him.

Even the thought of her own death made her laugh because it meant that she could soon be near him again.

This is the mark of the immense comfort she felt from her father’s presence, and a father knowing exactly what to say to bring comfort to his daughter.

This is an extraordinary example of a father-daughter relationship.

The father-daughter relationship is one of tenderness, respect, dignity, and comfort, and the Prophet’s and Fatimah’s is the gold standard.