Indeed women are so special in the sight of Allah that He chose them to be the vessel through which He gives life.
aaa

As a Medical student I was placed in the Obstetrics and Gynecology department for about 7 weeks. Part of that was spending a week doing night shifts in the Maternity Ward of our teaching hospital. This turned out to be one of the most spiritually enriching times in my life.

I have often read the verses of the Quran pertaining kind treatment for parents. Often times khutbahs and lectures have reminded me of the strong admonition of the Prophet (peace be upon him) to be good to the mother and to hold her in the highest esteem. After my stint on the Maternity Unit, I can understand why. And I can understand why Allah has put so much emphasis on the mother.

A mother goes through difficulty for quite a prolonged period in her life (9 months) to deliver a child. Every medical data shows that a woman is at increased risk of losing her life through a pregnancy than if she had not become pregnant. Quite simply, our mothers (mostly without even knowing the risks) actually risked their lives to bring us here on earth. By the grace of Allah, we have technology today that death during childbirth is not so common anymore Alhamdulillah.

However, until very recently, the highest cause of young women dying was childbirth. Today, the risk is a lot reduced but still there. Even before we arrived on earth, she was willing to give up her life just on the chance that we might one day see light in this world. Is there anyone but a mother who would do that?

The child-birth process itself is horribly painful and it was amazing to see that many mothers actually refused the chance to take any medications to help with the pain. Most mothers would hardly care about what was going on with them and keep asking if their unborn baby is still alright. Doctors and midwives would have to keep reminding the mother that her child’s life is important, yes, but her life should take priority all the time. If only a mother would agree to that. Who else would completely disregard their own health just to ensure that our health sticks?

Who else can make such sacrifices?

One of my patients was telling me about how childbirth completely makes a woman lose her dignity. It exposes a woman’s private organs to doctors, midwives and trainee doctors as well. Most of the women say a lot of things while in pain, quite understandably, but regret what they have said later on. They are heard screaming; they sometimes pass urine and stool because of the pressure and have to remove their lower garments just to give birth. Who else would so happily lose their dignity just to ensure that we can come into this world?

One of the most interesting things that I was thinking about is the fact that we never get to see the suffering and the trouble that mothers go through. This is also a mirror to how mothers are in general. They never want to let their children see any of their difficulties, or to be a burden to their children.

Mothers generally go about their lives as if nothing is going wrong, and children often times just do not understand. And because we do not see it, we do not appreciate it, and that is why so often we are not to our mothers as Allah and His Messenger commanded us to be.

And yet this placement taught me, what unimaginable pain that a mother goes through, to what lengths she would go and the amount of risk that she will take just to ensure that her child gets a good life. Who else is willing to do something like this?

Another aspect of life I have understood is about how underrated our mothers are in this world. While Allah, His Messenger and the religion of Islam gave rights and great honor to our womenfolk, the same cannot be said about Muslims. Over decades and even centuries many Muslim cultures have strayed from the path of our Prophet and his companions in their honor and reverence of our women folk. Rather we mixed in with the philosophies of the Greeks, Romans, and ancient Indians and so on and denigrated and ostracized our womenfolk.

Unfortunately even today some Muslim societies see women as simply bearer of children, substandard form of a man, someone whose life is not worth anything and so much more. I grew up in Bangladesh, a country where often times a female child would be given away because she was of “little value” compared to what a male child would bring.

However, the time I’ve spent with mothers and at times even grandmothers showed me the majesty of women. Indeed women are so special in the sight of Allah that He chose them to be the vessel through which He gives life. The name of Allah, al-Muhyiy (The Giver of Life) is inherently linked to the role of a mother. A hadith qudsi tells us that Allah has intentionally called the womb, “Ar-Rahm” in Arabic- the same root as His names ar-Rahman and ar-Raheem. That is the honor that Allah attaches. Will we follow suit and honor the womb that bore us for so long?

Abu Huraira reported: The Prophet, peace and blessings be upon him, said,

Medical research also showed that there are quite a lot of things that help in reducing pain for the mothers during labor and childbirth. Giving a water birth helps, taking some nitrous oxide gas helps. But interestingly enough, research shows that one of the best painkillers is actually a supportive husband.

From an Islamic point of view, we do know the importance of marriage, and how blessed marriage is from a spiritual, emotional and societal perspective. But this taught me a lot more about the importance of a husband, especially in times when he is absolutely clueless! 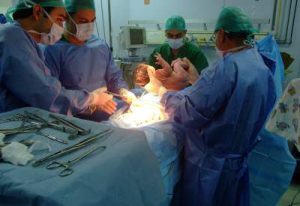 After all this pain and suffering, I find it quite amazing that mothers still love us after all of that. This is only possible because of a special love and nurturing qualities that Allah has placed in the hearts of our mothers. Among the greatest of gifts to a woman is her child, and she understands that.

However, the child fails to understand that his greatest gift is the mother. No one would take all that pain and still love us, care for us and adore us but only a mother.

Lastly, from a very personal point of view, I learnt about patience during times of adversity. Imam Ibn Nahwi was a scholar who went through some difficult times in his life and wrote a poem about it. In that poem he compares difficulties to the night, and the ease that follows like the crack of dawn and daylight. To me the nine months of pregnancy are like the long difficult night, and the birth of the child being the crack of dawn.

It teaches me that very difficult times will come in the life of every single person according to their own capabilities. And during those times, it is important to turn to Allah and seek help. The darkness of the night is only an indicator that dawn will arrive. Allah’s help is near. And just like all that pain results in an amazing gift, our difficulties in life will be rewarded for with the ultimate gift- paradise.

We ask Allah to bless, honor and have mercy on all our mothers, and to ease their path to the highest of levels of paradise.