It has always been my dream to do a Master’s degree ever since I finished university. As with many fresh graduates, I felt the pressure to go and get a job and earn my keep in this world, so that is what I did. However, the burning desire to learn more was always there.

As time passed, that dream was pushed aside because as with us all, life simply got in the way. I reverted to Islam in 2005. Then, I married and moved from England to be with my husband in his country in 2006.

That was a huge step in itself. As with anything, we didn’t have much money and so the priority was to set up a home and life together. I was working for a big multi-national company to try and pay off undergraduate debts. We faced many struggles in the beginning, including having a child, so my dream was once again put on the back burner.

In 2012, our life changed because Allah blessed us with a beautiful daughter after years of trying. Around this time, I was diagnosed with breast cancer and so a new fight began whilst adjusting to motherhood.

It was around this time that we started to hear more and more about ISIL on the news and the their terrible atrocities. We were extremely disturbed, especially when the backlash on Muslims was stepped up again.

My dream of doing a Masters had never gone away but it had changed, which was to learn more about Islam so I can one day teach the true Islam inshAllah. This became even bigger after seeing how this terrorist group was distorting Islam and what Islam really meant. I was adamant that after my cancer treatment had finished, I was going to pursue my dream.

It was now personal though. I was reading terrible stories of how these men were reaching out to the Muslim youth, who were angry and far from the real Islam, and really brainwashing them to join their terror.

It hit me like a freight train, this was no longer a dream I had to do for myself, it was something I was responsible to do for my daughter. She had to know the real Islam. She had to understand   the real beauty of Islam and she has to be strong in her faith so she could never be brainwashed like so many others.

In March 2016, I started my studies. I had already had my degree so I was blessed enough to be able to do a bridge course towards a Master’s Degree in Islamic Studies.  Juggling, motherhood, work and studying ares very difficult and I am still trying to find my footing. However, I’m happy because I’ve finally toke the steps to do what I had always wanted Alhamdulillah.

Some aspects of the dream have changed, it wasn’t just History I was studying like I originally wanted to do, although the Seerah (Prophetic Biography) is an extremely important part of Islamic Studies, and it was no longer just for me. It was with the intention to teach my daughter properly. Pressure was on!

I worked in the morning, whilst my daughter was at nursery, then afternoon and early evening time was for my family and then the late evening was for my studies. It was a very big struggle at first and I had taken on five subjects including Arabic for beginners!

I somehow pulled it together and managed to pass my first semester in August, with the exception of Arabic. I have to say, I really struggled with Arabic and may Allah make it easy on me in the new semester!

I feel my eyes have been opened to so much that I didn’t know. Even though I have been a Muslim for 11 years, I was learning things I never even heard of before and I was grateful Alhamdulillah!

Islam is often twisted to suit cultural needs and the real Islam is lost. That is why it is so easy for groups like ISIL and Al-Queda to operate. They operate on lies and they use these lies to fool young people who do not know anything about their religion or a twisted version based on cultural aspects of it. 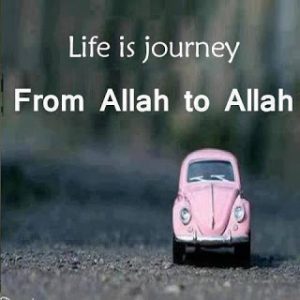 Juggling motherhood, housework, my job and studying is certainly a big challenge but it is one I am happy to do and blessed to do Alhamdulillah. I feel that more than ever the importance to teach our children real Islam , is the actual key to solving some of the terrible things that are happening in the world. We need younger people to understand the real Islam so that they can teach their generation and the up and coming generations after them.

For a long time, the focus has not been on the youth and so they have become separated and far away from religion. There are, Alhamdulillah, a number of scholars, sheikhs and teachers nowadays who are recognizing this and doing what they can to involve the youth a lot more than before.  However, we can’t rely only on them. It has to start at home. It has to start with the parents. The parents have to educate themselves no matter how small it is or at least send their children to reputable teachers to learn more about Islam

Allah will ask us on the Day of Judgment what we did to teach our children. This scares me and it should scare every parent. We do not need to send them off to an expensive Islamic school if it is not within our budget. We can start with educating ourselves properly to be able to teach our children. There are many things we can do to encourage them to learn. But it starts with us. We have to take our heads out of the sand and we have to tackle this issue.

I have reduced the number of subjects for my 2nd semester because I want to place a lot of focus on really understanding what I am studying. The pressure is on more than ever and when I am asked by Allah about what I did to teach my daughter, I want him to see that I did the best job I possibly could. Let’s all consider this: Islam begins at home.