Teaching my children how to worship Allah is as important as teaching them not to touch the hot stove....
aaa

Faith and religion are important to every God-fearing family when it comes to raising a child.

Written on the side of every Islamic school and children’s play center is the infamous Arabic proverb that says what it means in English:  “Instruction in youth is like etching in stone.”  That’s not very far from the Biblical proverb that says, “Train a child in the way he should go and when he is old, he will not depart from it.”

I am sure that if time allowed, one would find that each and every culture is full of proverbs that mean the same as the above because it is a proven human tendency that children reflect how they have been raised.

Raising children is no easy task and it is the burden of everyone that comes in contact with the child.  This is the reason that parents will also do their best to make sure that their child is surrounded by examples of people they approve of.  The conviction of faith sometimes causes parents to draw very tight strings around their children.  But when can religion be too much for children?  When does adherence to faith become dangerous?

Can religion go too far when it comes to children?  Is devoted servitude to God too much to ask of a child?

I will admit that like any God-fearing Muslim mother, I consider it my duty to teach my children how to be good Muslims.  One interpretation of the Glorious Qur’an explains that Allah states, “And I have not created mankind and Jinn kind except to worship me.”

Teaching my children how to worship Allah is as important as teaching them not to touch the hot stove because both are saving them from grave consequences.

Mark Galli states in his article “Focus on Grace, Not Control” that, “Parents who are attracted to religion because it gives them a sense of control can sometimes act too authoritatively toward their children.”

I understand his argument and I am thankful that Islam has taken the middle path. Muslims are to raise their children and have mercy on their age, frail bodies and growing minds.

I instruct my children with all that Allah has commanded His servants with and I explain the beauty and the wisdom of all His commands.

There have been times when rather than ask if the religion was too much for the children, I have asked myself if I think that was Allah’s intention.  Some issues such as hijab, prayers and manners may need a little customizing, while other issues such as diet and cleanliness do not. 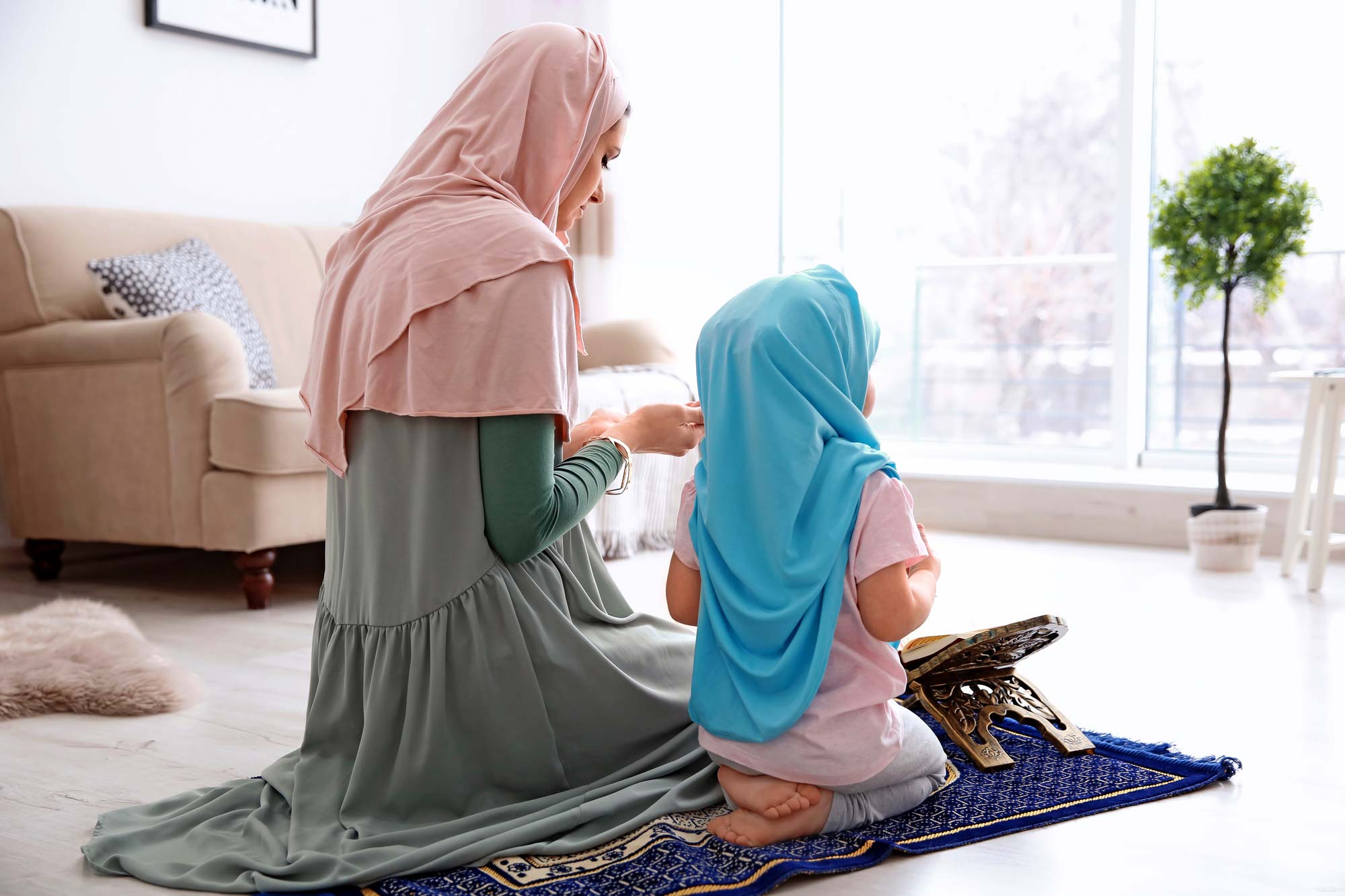 My eldest daughter has been wearing a headscarf since she was seven years old.  It was what she wanted and when I tried to trick her into going out without it, we never got very far because of the scene she would make.

At that age, I know that she just wanted to imitate mommy, just like every girl plays house with a pocketbook and heels…like mommy.  As she got older, I gave her many opportunities to change her mind and not wear the scarf.  The religion does not obligate her to wear a scarf until puberty and I plan on offering her the choice to remove it until she reaches puberty.

I know of others who actually insist that their girls start to wear the scarf at the age of six and seven.  I was afraid that if I forced my daughter to wear it at such a young age, when it finally came to time for her to have to wear the scarf, she would not want to anymore.

I was afraid that if she wore the scarf without understanding its importance and significance, she would burn out.  Without love of hijab in her heart, burn out would be easy because the reward of Allah would not keep her strong and focused.

Islam commands that children begin to pray the obligatory five prayers at the age of seven.  As expected, seven year olds can only achieve a certain level of commitment and dedication.  The same narration that commands the seven year old to prayers, considers the growing mind of the seven year old and ends in stating, “And discipline them if they refuse to do so by age ten.”

The religion of Islam has mercy built in.  If anyone were to claim that Islam is harsh on children, they have to blame the people and not the religion.  Mankind sometimes takes matters into his own hands and messes it all up.  Islam has been sent by Allah with perfection and for this reason, I am convinced that all falsities come from the hand of man.

What Punishment Do You Use?

Islamic manners very easily can run into tradition more than religion.  The general consensus is that Muslim children should be generous, fair, truthful, polite, neat and obedient to parents and adults.  That makes enough sense…right?

Well what happens when your child tells a lie and lying is against your religious doctrine?  Will soap in the mouth, bed with no dinner or a beating whip the lying tendency out of the child?  I certainly say not.

I do say that children of any and every age should not be allowed to lie. Parents have to customize their discipline tactics so that they are effective but not excessive.  Parents must show their children mercy as Allah shows on His creation.  How else can we teach our children about mercy and forgiveness if we do not show that example?

The diet and cleanliness of a Muslim are measures that allow no room for interpretation or personal opinions.  Pork is absolutely prohibited in Islam unless it is a life and death situation; Notice the mercy factor, yet again.  Meat should be slaughtered in the name of Allah and with a sharpened knife to alleviate unnecessary pain to the animal.

I don’t give my children the option of choice when it comes to our dietary laws.  “Allah has commanded such for your own good.  You show your gratefulness through your obedience,” is what I preach to my children.

Their hygiene is another topic of unwavering submission to Islamic law.  Again where one might ask if religion is too much, I would argue and say that Islam is inclusive of all aspects of life, thorough, perfect…but not too much.

Proper cleansing after using the bathroom, ablution before prayer and full showers protect our health.

Allah has blessed and safeguarded Islam with mercy, the mercy that He shows to us, which obliges us as parents, to show to our children as we raise them.