The story of Prophet Ibrahim (peace be upon him) and his  family was filled with constant test and trials to prove their love and faith to Allah.

As a result of their sacrifices, the blessings of their good actions are still present with this Ummah today.

Prophet Ibrahim, his wife Hajar and their little baby Isma’il had been travelling for days. They stopped at a place that had no water, plant or human life. The only thing they could see was hills and sand.

Prophet Ibrahim helped his wife and child dismount and then left them with a small amount of food and water. He climbed back onto his camel to return home.

Hajar was very surprised and asked him, “Where are you going Ibrahim, leaving us in this barren valley?” He did not answer her. She repeated herself but he remained silent. She was worried something terrible would happen to them, especially their baby who could die of hunger and thirst.

Then she asked him,” Did Allah command you to do so?”

Then because she was an obedient wife who trusted Allah and had a strong faith, she said with deep faith in her heart, “If this is Allah’s Command, then He will not abandon us.”

Running Between As-Safa and Marwa

Prophet Ibrahim was very worried about his family being alone in this deserted place, but after all, he obeyed Allah’s command. He knew Allah was testing him; after all, Allah tests those He loves most. Out of concern for them he prayed,

“O our Lord! I have made some of my offspring dwell in a valley without cultivation, by Your Sacred House (Kaba at Mecca) in order, O our Lord that they may offer prayer perfectly. Incline the hearts of some men towards them in pity, and O Allah provide them with fruits so that they may give thanks.” (Qur’an 14:37)

After a few days, the water and food had been used up; Hajar and her baby Isma’il were gripped with hunger and thirst. Hajar had been feeding Isma’il milk from her breasts, but that too had dried up. Baby Isma’il began to cry piteously and Hajar’s tears too began to flow.

Imagine how she must have felt – she was in agony over her baby. She could not bear to see him suffer like this so that she placed him down on the ground and started running toward Mount As-Safa hoping to find some food, water or somebody to help them in this distressing time. She stood on the mountain, looking keenly at the valley but nothing and nobody could be seen. Then she descended mount As-Safa and ran in the valley reaching the mountain of Al-Marwa. There too she stood, hoping to see somebody to help them but there also, she found nothing and no one. Frantically,

She ran back to the first hillock, then from one to the other, completing seven runs. It was hard but Hajar remained patient and kept praying.

This event marks the Pilgrimage rite of Sa’y in Hajj between Safa and Marwa.

Hajar returned to her little baby with an aching heart and found him shrieking. “Mercy, O my Lord!” she cried. She looked at her baby helplessly who appeared as if he was on the verge of dying, praying with all her heart for Allah to help them.

Then suddenly, in this moment of deep anguish, she saw crystal clear water bubbling out of the dry earth. Allah had responded to her cries!

Quickly, she poured water onto Isma’il’s mouth and he drank. She thanked Allah tremendously for His never ending mercy as they filled their stomachs. Allah rewarded her patience by causing water to gush forth from the dry earth to ease their sufferings.

It is this miracle water which is called Zam Zam. This 4000 year old stream is still flowing, providing millions of pilgrims with water.

Due to the discovery of Zam Zam, the tribe of Jurhum sought Hajar’s permission to camp there and to use its water. She was so happy to see people in this forsaken land. Allah had indeed ‘inclined the hearts of some men’ towards the place where she and her baby was abandoned, thus answering Prophet Ibrahim’s prayer for his family. So, Hajar welcomed them heartily and many of them made Makkah their permanent home.

Prophet Ibrahim constantly thought of his family that he left behind and thus visited them to see if they were well. Upon finding them in the state they were in, he thanked Allah who did not abandon them but sheltered them comfortably.

The Building of the Ka’bah

Isma’il grew up and later, he got married to a young woman from Jurhum tribe. Many years passed before his father visited him again. This time Allah had commanded him to build the first ‘House of Worship’ where people could come together and worship Allah.

He found Isma’il near the well of Zam Zam, sharpening his hunting arrows. Ismai’l was overjoyed to see his father again and they greeted each other with love and longing. He told Ismai’l that Allah had instructed him to build the Ka’bah (cubic structure) on elevated ground. As always, Isma’il was ready to serve and obey his Lord. So, the two of them set about digging the foundation. Then they raised the foundations of the Ka’bah. Isma’il brought the stones while Prophet Ibrahim built.

While Isma’il was handing him the stones, both of them were saying:

Then both of them went on building and going round the Ka’bah repeating this dua. 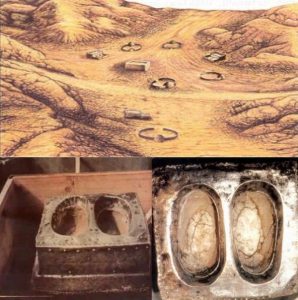 The footprints of Prophet Ibrahim while building the Ka’bah.

When Isma’il was still a young man, Allah again put Prophet Ibrahim to the test. Prophet Ibrahim’s entire life was one of tests and trials of his sincerity to Allah. One night, he had a strange dream. He dreamt that he was sacrificing his only son, whom he loved so dearly.

Prophet Ibrahim knew that his dream comes as a command of God and that He shall obey the command.

This was an enormous sacrifice to ask of any person. Prophet Ibrahim longed for a son in his old age and Isma’il was a great joy to him. Only a great Prophet like Ibrahim was able to carry out such a painful task as proof of his true love for his Creator.

Prophet Ibrahim left for Makkah. It was heart-breaking for him to tell his son about this news. He told Isma’il about the dream and asked his son what he thought.

Isma’il showed great courage and obedience. He said:” “O my father! Do what you are commanded, if Allah wills, you shall find me of the patient.”

He then removed his clothes and drank some water. Fearing that he might struggle, Isma’il asked his father to tie his hands and feet. Prophet Ibrahim sharpened the knife so that death would be swift and less painful. He laid Ismai’l down and tied him. With a last painful look at his son and a heavy heart he lifted his knife and brought it down to Isma’il’s throat but the knife would not cut!

Ismai’l urged his father to press harder and so he did and still, the knife would not cut! He turned to Allah asking for forgiveness for his weakness and Allah responded to his plea, “O Ibrahim, you have fulfilled the dream, thus we reward the obedient.” Both father and son did not waver in their sacrifice… Nearby, appeared a big ram to be sacrificed in place of Isma’il.

This event is commemorated every year by Muslims, on the day of Eidul-Adha, The Festival of Sacrifice at the end of the annual Pilgrimage.

– Because of Hajar’s faith and trust in Allah, she was prepared to stay alone with her baby in a deserted desert – knowing in her heart that Allah would not abandon them. When you have trust in Allah you will do whatever He wants without question.

– Allah promises ease after every hardship and Hajar was at the point of extreme difficulty when Allah brought relief.

-Isma’il was equal in his dedication to Allah; he did not question his father’s motives because he knew his father was acting on Allah’s command. Because of his dutiful ways his father loved him dearly.

-A believer’s life will always be filled with trials and tribulations – it’s how Allah tests our love for Him.