Research has proven that a child is ready to learn a second language since their early months!
aaa

You decide to teach your child one or two foreign languages and one day you find him coming over to you, shouting “Mummy! Awez miel on my yougurt!”(I want honey on my yogurt; mixing Arabic, French and English).

You panic and think to yourself, “What have I done!”  Well, don’t take it all too seriously, because it could turn out that you have done them one of the greatest favors in their entire life.

How Many Languages Can a Child Use at the Same Time?

It is easy to imagine that your child’s brain is an empty vessel which is ready to take in whatever it comes across.

And so when it comes to language acquisition, there is not a certain limit to your child’s learning capacity.

In Singapore, many children go to school at age three, already speaking three languages because switching between two or three languages in daily life is the norm for Singaporean community.

Many of these children are also still required to learn more languages at school.

Beth Walton writes in USA TODAY, “when children start learning languages at birth, they have the capacity to learn many languages at once without getting confused — because, as the brain develops, so does the ability to separate one language from another.” (“More Children Learn More than One Language”).

The phrase “learning language at birth” might feel like an insult to the readers’ intelligence, because it is common knowledge that you start learning foreign languages at elementary school, maybe even later.

However, what you are about to read next might take you by surprise.

When is Your Child Ready to Learn a New Language?

Well let’s first acknowledge that exposing an early teen to a foreign language won’t enable them to speak the language exactly like a native speaker in the vast majority of cases.

Linguists as well as a body of research have supported a February 1996 Newsweek article’s claim that “a child taught a second language after the age of ten or so is unlikely ever to speak it like a native.”

This might not be entirely correct, because many of us have seen some exceptions to this rule.

Nevertheless, if you want to guarantee native speaker ability, it is advisable to start exposing your children to foreign languages as early in their lives as possible; as early as when all you think they can do is babble and coo!

Research has proven that a child is ready to learn a second language since their early months!

Studies have also proven that the earlier a child is exposed to a foreign language the greater the chances are that this child will master both his native and second languages.

Of course, this mastery depends on whether the child is exposed to both or more languages simultaneously and on a regular basis. So how does that happen?

How Do Children Learn a Second Language?

Studies have shown that there are generally two main ways in which children may learn a second language: simultaneously or sequentially (McLaughlin et al., 1995; Tabors, 2008).

Linda C. Halgunseth, Coordinator of the Office of Applied Research at the National Association for the Education of Young Children in the United States says that children under the age of three who are exposed to two languages together are called Simultaneous learners.(“How Children Learn a Second Language”).

But in fact, whether your children start absorbing the language before the age of six months or after seems to be a crucial factor in their language preferences and acceptance at least during the first years.

Halgunseth says that before simultaneous learners reach their sixth month of age, they learn both languages in a similar manner and do not favor one over the other.

This means that babies are the best candidates to learn foreign languages and speak them like a native.

One research study shows that “4- and 6-month old infants can discriminate languages (English from French) just from viewing silently presented articulations” even if they are being raised in a monolingual household (Weikum et al., 2007).

Halgunseth adds that at six months of age, babies start to detect aural differences between languages and may possibly begin to prefer the language they are more exposed to.

This is due to the fact that between 6 and 12 months, infants can actually “hear” the particular sounds of all languages spoken and that makes them better than adults at noticing the differences between the sounds of non-native languages. However, they lose this ability by the age of 12 months. (“Recognition of Sounds”).

As for Sequential learners, they include children who have already become familiar with a particular language and are then introduced to or taught a second language.

Sequential learners are the most common language learners in most environments as they could be of any age and as Halgunseth maintains their language learning process could be affected by the child’s character or motivation. 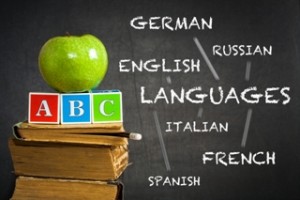 You might consider using the ‘one-parent-one-language’ method. But, unless your child has serious trouble communicating, this method is not the only means to your end.

It is quite normal for a youngster to mix up and get a little confused when using different languages.

But usually, children will come to know which is by ages two or three and everything naturally falls into place.

Generally, by the age of seven, children are able to handle languages to which they are regularly exposed and can speak them effortlessly (“Multiple Languages and Your Child’s Brain”).

Some parents may worry that a second language may interfere with their child’s first language ability.

But, according to Kathleen Marcos of the ERIC Clearinghouse on Languages and Linguistics, learning a different language can boost a child’s first language ability.

Structure and vocabulary of other languages can help a child learn more about their mother tongue (“Why, How and When Should My Child Learn a Second Language?”)

Also, parents whose mother tongue is different than that of the society they live in may worry about their children’s language abilities.

They may face the issue of their child trying to cope with a society that speaks a different language.

So instead of worrying, what should parents actually do to help their children manage and make use of the situation they are in?

How to Help Your Child Manage a Bilingual Situation?

First, you should obviously stop worrying. If your family speaks a minority language in a society, you may be looking into raising a bilingual child.

But, unless your child has serious trouble communicating, this method is not the only means to your end.

Your best option is to speak your minority language to your child and let them learn the majority language straight from the society. (“Bilingual and Multilingual Children: A Different Perspective”).

This way, you won’t have to worry about your child losing competency in any of the two languages.

More generally, according to many studies (Espinosa, 2008; Kuhl, 2004; Kuhl et al., 2006; Tabors, 2008), Halgunseth advises that parents must be careful to provide their babies before the age of six months with similar exposure to both languages; or else, children may start dropping words of the language they do not hear as much.

She adds that “Dual language development requires the conscious effort, reinforcement, and support of parents, teachers, and family members.”

Let’s say you are trying to help your daughter master a second language she is learning at school.

Jeff Ropelato from Toptenreviews.com says that you cannot do it properly unless you are actively involved yourself.

Learning the language along with your child can help motivate her.

Moreover, enriching the learning process with fun outings to music or dance festivals from countries that speak the target language and playing videos and TV programs is always a good idea (“When Should a Child Learn Another Language?”).

One study also shows that parents should make sure that their child’s language learning environment is a nurturing environment, be it school, kindergarten or home (Tabors, 2008).

What Are the Benefits of Learning a Foreign Language Anyway? 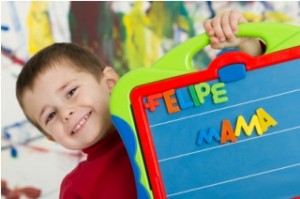 If you want your child to master one or two foreign languages, you should regularly expose them to the language as early as possible.

Well, if your child is being properly exposed to the target language they are learning, there are many benefits that may come out of that.

According to Marcos and François Thibauta pioneer in foreign languages for babies and children and author of Professor Toto, an award-winning home-based foreign-language curriculum for parents and children, some benefits are that children learning a second language do better on standardized tests, become better problem solvers and are more welcoming to diversity.

In addition, infants who are simultaneous language learners enjoy cognitive benefits such as having greater neural activity and denser brain tissue in the areas responsible for memory attention and language. (Bialystok 2001, Mechelli et al., 2004, Kovelman, Baker, and Petitto, 2006).

If you want your child to master one or two foreign languages, you should regularly expose them to the language as early as possible.

Learning a second language should come as naturally as learning their mother tongue.

Even if you missed the opportunity of teaching your child a language before they are ten years old, not to worry; learning a second language is always a plus point at any age.

And always remember that your child may not be able to make it alone; your constant support is crucial to their dual language development and their ability to speak both languages like a pro!

– Kovelman, I., Baker, S., &Petitto, L.A. (2006). Bilingual and monolingual brains compared: An fMRI study of a “neurological signature” of bilingualism. Paper presented at the annual meeting of the Society for Neuroscience, October 14-18, Atlanta, GA.