Have you ever touched a bare electricity wire with wet hands?

Have you ever put your hand on burning coals during a barbeque?

Have you ever tasted thick bleach?

Have you ever thought of why your answer to the above three questions is “no”?

The reason why your answer to the above three questions is “no” is because you have certain beliefs that guide you to what you can do and what you can’t do.

Our belief system has an extraordinary power over our lives. People without belief are like cars without engines, airplanes without wings, or motorboats without motors.

Belief helps you to see what you want, to have the determination to reach out for it, and to have the persistence to get it, no matter what it takes.

Prophet Muhammad (peace and blessings be upon him) changed people’s beliefs in Makkah in the early days of Islam; hence, their thoughts changed, their feelings changed, their priorities changed, and consequently their behavior, choices, and attitudes changed.

“Only those are the believers who have believed in Allah and His Messenger, and afterwards have doubted not, but strived with their wealth and their lives for the cause of Allah. Those are the sincere ones.” (Al-Hujurat 49:15)

Raising Muslims with a sound belief system is like equipping the coming generation of our Ummah with a compass, a map, and a shield to go about life with.

Providing our children with a direction, a guide, and a safeguard against dangers is one of our duties as parents and educators that we are accountable for before Allah Almighty.

“O you who believe, ward off yourselves and your families against a fire (Hell) whose fuel is men and stones, over which are (appointed) angles stern (and) severe, who disobey not (from executing) the commands they receive from Allah, but do that which they are commanded.” (At-Tahrim 66:6)

What Are Some of the Basic Islamic Beliefs We Want Our Children to Have?

1- Belief in Allah Most High

-He has created them and everything around them.

-He loves and protects them.

-He is powerful and capable of doing anything He desires.

2- Belief in the angels, their existence, nature, and responsibilities

3- Belief in the previous books of faith and prophets, in the nature of their mission and the fact that they were all sent by Allah to deliver a common message of worshiping the One and Only.

4- Belief in the fact that there is a life after death where Allah Most High will judge everybody, then reward or punish them based on their deeds in this life.

Practical Tips That Can Help Build Belief in Our Children

1- Introducing and maintaining certain habits can help foster a sound belief in their hearts. Examples of these habits are:-

Supplicating to Allah Most High during and after prayer, when going out, when riding in the car, before sleeping, and so on, builds their connection with Allah Most High and reminds them that He is near, which gives them a sense of strength and courage.

It also helps minimize bad deeds as they remember that Allah Most High is watching them.

Reflecting upon Allah’s creation and not taking it for granted. Supposedly simple, naturally existing creations—like sunshine, rain, wind, flowers, our body parts, and so on—should not go unnoticed.

We should try to encourage our children to reflect on the reasons behind them, the capable power behind them, and the fact that they must be there for a purpose.

Using different events such as the birth of a baby, the death of a person, or the healing of a wound, to illustrate some of the belief we want our children to have is very important.

This can be done through eliciting from the children what they make of that event, Allah’s mercy and guidance in it, and our duties and responsibilities towards it. 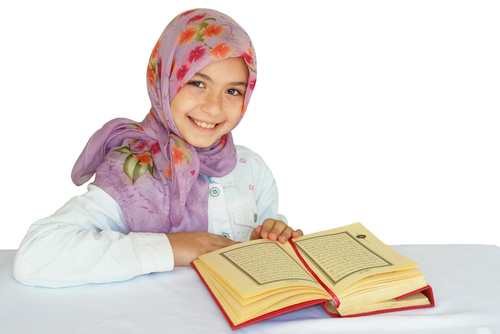 Telling the children stories about believers, what they believed in, and the impact of their belief on their behavior, can also play a major part in shaping our children’s belief system.

Stories about Prophet Ibrahim (Abraham) and the other prophets, the boys in Surat Al-Kahf (The Cave) and the story of how their faith and belief influenced their choices, or the story of the magicians at the time of Prophet Musa (Moses) and the total change in their perception once they believed, and other stories from the Qur’an or seerah (biography of the Prophet/Companions) that would be fun to listen to, as well as giving the children the foundation of their belief.

Choosing the right time and place to go about building our children’s belief system is very important.

Equally important is to have a positive, loving relationship with our children that will minimize resistance to our opinions and suggestions.

However, resistance does happen, and children, especially those exposed to a secular trend of thinking, tend to question a lot and require material proof to some of the unseen beliefs.

Therefore, here are two of the basic principles that can help us face such anticipated problems or resistance:

1- There are certain events, places, or people that certainly exist despite the fact that we haven’t seen or experienced them in our lives.

Events like World War II, places like a tiny village in Thailand, and people like Christopher Columbus, are examples to show that when we receive information that has been passed on to us from trustworthy people over years, this information becomes a fact we believe in.

The reason is that so many truthful people agree on this fact and their passing it on gives it credibility, making it worth believing.

2- We cannot deny the existence of certain things just because we are unable to reach them with our limited senses.

For example, if we are in a quiet room, that doesn’t mean that there are no noises; that just means that we can’t hear any noises that are higher or lower than the certain range our ears are equipped for.

Therefore, admitting the limitation of our senses will give us flexibility in accepting and believing in an unseen world.

Finally, we ask Allah Most High to grant us the logic to appeal to our children’s minds, the sensitivity to appeal to their hearts, and the wisdom to choose the right time, the right approach, and the right words.

We also ask Allah Most High to open their hearts to the true belief.

“But Allah has endeared the faith to you and has beautified it in your hearts, and has made disbelief, wickedness and disobedience (to Allah and his Messenger) hateful to you. Such are they who are the rightly guided.” (Al-Hujurat 49: