I’m not a relationship expert, but I think we’re getting ahead of ourselves when we make the grand proclamation that trust is the foundation.
aaa

“Sunny days, everybody loves them. Tell me, baby, can you stand the rain?”

— song “Can You Stand the Rain?” by New Edition

Just as Hamid was settling into an engaging conversation with friends, his cell phone chimed indicating a text message. Groaning, Hamid reached into his pocket and withdrew the phone. He had prayed Dhuhr with the congregation an hour before and still sat on the carpet of the masjid.

At the sight of his wife’s name and message, Hamid felt the warmth of pride in his chest. Though it had been almost four years since he had married Maryam, it was still difficult to believe it was real. Maryam had been the woman all the brothers wanted to marry. She was attractive, intelligent, and religious. Proposal after proposal had been turned down…until she and her father accepted his.

“Sure, baby,” Hamid texted back. As he slid the phone back into his pocket, he couldn’t keep from smiling.

Hamid returned home late that night and was a bit saddened that Maryam was still at her friend’s house. “I’m home, baby,” he texted her as he slid into a chair in front of his computer, deciding to browse online to pass time. “Hope to see you soon.”

He typed in the web address for his email account and started to sign in when he noticed that his email was already logged in. He silently chided himself for forgetting to sign out. As he scrolled through his messages, he saw that there was an unread message from the imam. He creased his forehead in confusion as he clicked on the subject line next to the imam’s name.

No problem. You are welcome any time. We look forward to seeing you. As always, I am here if you need to talk.

It took a full thirty seconds for Hamid to register the meaning of the email…and that it was not intended for him. Heart racing, he scrolled down and realized that the message was part of an exchange of several messages…between the imam and Maryam.

But, how did this reply get to his account? It was then that Hamid saw the name at the top of the email screen: Maryam Umm Muhammad. This wasn’t his account after all!

Head throbbing, he read the messages one by one, his shock and hurt allowing him to process only some of them.

Thanks for being such a good listener. I’m sorry for keeping you on the phone so long last night, but Dana told me you wouldn’t mind. Please keep us in your prayers. I swear, I feel like I’m not even married Hamid’s gone so much. MashaAllah, Dana is so lucky to have someone like you.

BarakAllaahufeeki, Maryam. I appreciate the compliment, but I think it’s Hamid who’s the lucky one. But, no need to bring up the past. You chose who’s right for you, so stick with it, okay? May Allah bless you both.

I need to talk to you again today. Sorry for calling you so much. I didn’t realize I kept you on the phone for three hours!  But I can’t get even five minutes from Hamid. Maybe it’s better if I just stop by. I’ll bring Muhammad too if that’s okay…

Hamid was trembling when he heard the familiar chime of his phone and glanced reluctantly at the message from his wife.

“Sorry, sweetheart! I’m on my way now. Muhammad fell asleep & I had a hard time waking him. Be home in about 10 minutes isA.”

Hamid threw the phone against the wall, and pushed himself out of the chair. Fuming, he walked over to the front door, where he waited, jaw clenched, for the sound of Maryam’s keys… 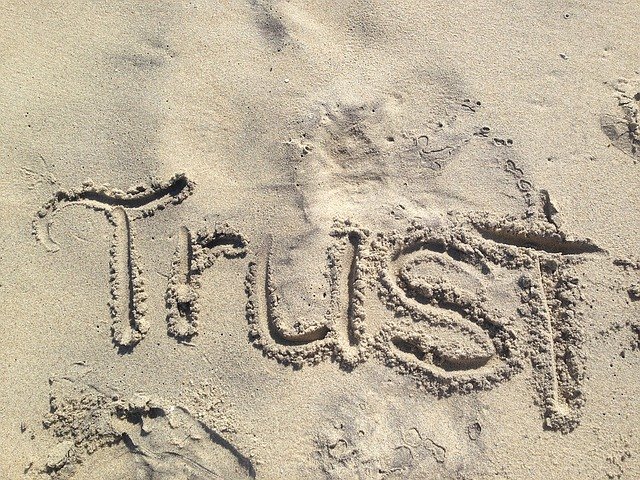 What Is Trust Anyway?

The fictional account of Hamid and Maryam is one that is all too common in many homes. Whether it’s the husband or the wife who feels betrayed, the reaction of the heart is almost always the same: But I trusted you!

I’m not a relationship expert, but I think we’re getting ahead of ourselves when we make the grand proclamation that trust is the foundation of a relationship. No, I certainly don’t doubt the critical importance of trust, but before we can gauge how important trust is, we must have an unambiguous idea of what trust is.

Merriam-Webster defines trust as an “assured reliance on the character, ability, strength, or truth of someone or something.” Chances are, very few would disagree with this definition. But there are two major problems here: This makes trust neither measurable nor attainable, and its existence depends entirely on something outside human knowledge or control—the heart and mind of another person.

Trust Is Never a Guarantee

“O you who believe, when you deal with each other in transactions involving future obligations in a fixed period of time, reduce them to writing…”