The word “dating” stirs a lot of controversy among Muslims, but can and should we work with this term to suit a Muslim-American context and facilitate a larger conversation on gender relations? Are expressions such as “talking” and “getting to know each other” euphemisms that limit our ability to fully engage in honest discussion, or are they a useful way of distinguishing courtship practices among Muslims from secular practices usually associated with the term “dating”?

The following contributors debate whether using the term and concept of “dating” is a helpful basis for forming a definition that Muslim-Americans can appropriate.

Dr. Asad Hussain, a psychiatrist at the Delaware Psychiatric Center:

Dating is a Shared Human Experience

The term “dating” has a negative connotation primarily due to what it represents within American culture. However, despite the skepticism the Muslim community has towards dating, there are many positive aspects we can apply within the parameters of Islam. As long as a basic foundation and guidelines are established, appropriating the term and concept of “dating” can bring more benefit than harm.

When discussing what dating means to us, we must realize that it is not just about two Muslims getting to know each other, but rather two human beings. According to Erikson’s theory of human development, adolescence/young adulthood (typically ages 14 to 40) is a time of self-identity and individualization. Individuals shy away from family values during this stage and begin to adapt values similar to their peers.

This is a crucial time for self-exploration, discovering one’s own core values, and pursuing relationships. As Muslim-Americans negotiating our religious beliefs and cultural realities, we are naturally influenced by our surrounding culture’s notion of “dating”. We engage in a similar courtship process, with some distinct differences, but ultimately we are acting in concordance with our natural stage of development and sharing the same basic experience.

Therefore utilizing our cultural familiarity with the term “dating” and adjusting the concept to fit in an Islamic framework will more strongly resonate with Muslim-Americans and guide us toward honest discussion than substituting other terms just to emphasize differences between us and our non-Muslim peers.

The unique emotional involvement of assessing lifelong compatibility with someone is not represented by a term like “talking”. Working through the nuances of appropriating the term “dating” will initiate an honest discussion about the nuance and complexity of the courtship process itself and how it relates to our distinct values as Muslim-Americans.

More importantly, we must not get caught up in trivial details such as labels, but instead concentrate more broadly on our guiding principles and ultimate aims. The fundamentals upon which dating was founded are still useful as guidelines for Muslims when meeting potential spouses in a way that is respectful of our religious values.

Times have changed since our parents married, yet one aspect that remains relevant is establishing boundaries from the beginning of a relationship in order to maintain clear and pure intentions. Through balancing our religion and culture, our goal is to guide our community in such a way that two people can grow closer to Islam as they get closer to each other.

Why Should We Use a Word with Such Negative Connotations?Rifk Ebeid, a Palestinian-American human rights activist and lawyer:

No matter how we try to cater the word “dating” to a Muslim standard, the connotation it has in the broader American context will govern. Dating in America takes many shapes. Some “casually date” while others are “exclusive”. Either way, though, naturally involves both a personal connection and physical interaction that exceed the bounds permitted in Islam.

Dating also forces a budding relationship – which may or may not work out – into the public realm. Some argue that being public is good because it creates accountability for both partners; however, being public usually entails using terms like “boyfriend/girlfriend” to describe the couple, accompanied by a prolonged period of courtship without a true commitment towards marriage. 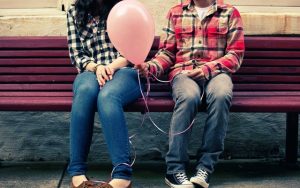 Instead, involving the families and maintaining privacy sets boundaries and holds both partners accountable, because they have a specific purpose for which they are talking.

Ultimately, the decision to be public or private is something personal and dependent upon the preferences of the couple, their own unique circumstances, and what they believe their boundaries in Islam are.

As long as the families are involved, it should be up to the couple to determine what type of relationship they believe is acceptable.

Some Muslim-Americans have suggested we take the word “dating” and make it fit in a Muslim context, akin to “Mormon dating” or other sects of Christianity in which people date but prohibit physical contact. While I understand these arguments, the word still makes Muslims uncomfortable, and will undoubtedly hinder efforts to facilitate our discussions on relationships.

I think it is much safer for Muslim-Americans to use the expression “talking for the purpose of marriage”.

Some argue that in doing so we are just playing with words, but I disagree. We can’t deny that one’s immediate reaction to the word “dating” is quite different than to the word “talking”.

Establishing a dialogue about Muslim relationships that fits in the American context does not mean that we must integrate a term that does not fit a Muslim context. We should be able to apply our own discourse that maintains the distinction between “dating” and “talking”, because it is this distinction that will allow us to effectively approach such a sensitive subject. Why should we use and redefine a word that has such negative connotations for Muslims when we have better and safer alternatives?

This article was previously published on Altmuslimah.com