Although multicultural marriages can seem difficult or alien, it is important to remember that racial bias has no place in Islam.
aaa

Despite numerous Prophetic sayings that nullify the humans’ obsessions along racial lines, inherent racial preferences exist when it comes to choosing a spouse. Even in multi-racial America, a study by the University of California, Irvine, found that even when dating online, prospective candidates were very inclined to choose partners of certain cultures over others.

Cultural differences brace the brunt of marital misunderstandings as spouses — even Muslims — often carry cultural baggage that sometimes overshadow the sovereignty of Islamic principles. This is especially true for born Muslims or Muslims from Muslim-majority countries. It is through die-hard traditions that the fine line of separating what is Islamic from what is purely cultural is sometimes blurred.

Bias for a certain culture is strictly prohibited in Islam, but Islam does not eliminate cultural practices altogether. In fact, Islam requests that humans celebrate and take pride in the practices of their cultures as long as they do not contradict the teachings of Islam.

The Qur’an has also reminded that diversity is Allah’s will; if He had not wished so, the human race would be monocultural; thus, there is a great wisdom behind the diversity that speckles the earth.

However, in a marriage, problems arise when one spouse’s culture becomes overbearing and requires the other spouse to “comply,” even if the practices have nothing to do with Islam. This can be as simple as a preference of culinary variety to as severe as superstitions.

Go Back to the Qur’an

The trick to keep a multicultural marriage thriving is to keep close to the Qur’an. No matter what in-laws insist on or the big book of tradition preaches, go back to the Qur’an. The Qur’an has already outlined the perfected way of life paving the route to happiness.

“Commitment to Islam is very important, not only for a multicultural marriage like mine but also for monocultural marriages,” says Anisa, an Indonesian mother of four children, who is married to an American Muslim.

Anisa’s in-laws initially thought her sole motivation for marriage to their son was for a green card, which she found hurtful. However, she did not miss the chance forda`wah work (inviting people to Islam). She wrote a three-page letter to her prospective in-laws about what marriage means in Islam.

Fifteen years later, she and her in-laws share a loving relationship. Anisa herself descends from a mixed marriage.

“Do not ever think that your culture or background is more superior to others’,” she reminds younger spouses, relaying a strong message from Prophet Muhammad (peace and blessings be upon him).

Although the Qur’an does not talk about every single practice in every single culture in fine print, spouses can find solitude just by reading the scripture, and this will help resolve their differences and find similar grounds.

Differences are inherent in any marriage, so an open line of communication is vital to keep negative or dubious vibes out of the way. When Fatma married her Muslim husband, her family was shocked. Being of a colorful background herself, Fatma’s Icelandic, English, German, and American-Indian descent was no match for the first time she met her Muslim in-laws in India.

“I was greeted by my father-in-law holding a chicken and saying some words I didn’t understand.”

Save the language barrier, a few years into her marriage, Fatma believes that neither her parents nor her spouse’s are obstacles any more. Keeping things colorful, she says that “there is always something to learn,” and that she “learns about Islam everyday.” Her parents have also become more accepting of her new faith. 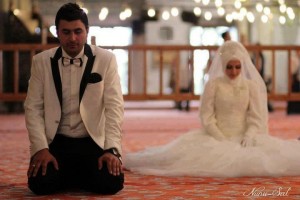 The trick to keep a multicultural marriage thriving is to keep close to the Qur’an.

For converts marrying into Islam, it can be especially difficult to shake off their own cultural nuances on such an alien faith. For African American revert Candice, she — like many other new Muslim women — found that her family was concerned about the Islamic “culture” often relayed by the media.

“Two of my mom’s friends had had unsuccessful intimate relationships with Muslim men. They tried to warn me about the ‘way’ Muslim men are. It didn’t shake me because the men they dealt with were not religious at all. Additionally, the ‘way’ that they were warning me of is the same way that irreligious men of any religion behave.”

Ironically, Candice married her Columbian Muslim husband, who is a revert himself. They find that both their cultures have similarities and differences but are brought together by Islam.

“We try our best to make Islam the center of our life, and since both of us come from traditionally non-Muslim cultures, we had to leave a lot of cultural stuff aside.”

She elaborates, “For instance, big, co-ed family gatherings with lots of alcohol and music are a staple in both our cultures. We try to avoid most of those gatherings, opting to go to the tamer ones. When we host parties at our home, the men and women are separated and there is no alcohol or music.”

“Since we come from different cultures, we’re both very keen about not imposing one culture on the other. We’re able to enjoy the aspects of each other’s culture and other people’s cultures that don’t conflict with Islam.”

Find Friends and Family Who Are Supportive of Multiracial Marriages

Besides keeping an open mind between spouses, it is important for members of multicultural marriages to keep good company. Somehow, friends and family almost always become obstacles. It can be tiring when dealing with insensitive remarks thrown across the dinner table by family members who are not open to interracial marriages. So, keeping close company with people who appreciate different cultures or those who share similar relationships will take a weight off the extra baggage.

Talking about the problems that arise in a multicultural marriage will better prepare spouses of incidences that may arise, and how to deal with them when the time comes. Islam prescribes patience and understanding, as enlightenment really does come with the acceptance of other people’s cultures and faiths.

Even with Anisa’s coming from a mixed marriage, her parents were not too happy with her choice of an American spouse. Luckily, she found support in her sister and brother-in-law, who were both studying in the US and knew her prospective husband. They helped bridge the gap between him and her parents.

“In the beginning, I think my father would’ve preferred that I marry an African American,” adds Candice.

“My husband’s father preferred a South American woman for his son. Those initial preferences are completely out of the window now. We all get along really well, and cultural differences don’t matter at all.”

Candice proves that with effort one can look past differences, all cultural baggage can be lost in the long run. 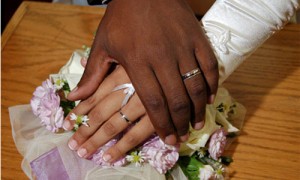 Prophet Muhammad advised to choose one’s spouse based on these Prophetic narrations:

“A woman is married for four things: her wealth, her family status, her beauty, and her religion. So, you should marry the religious woman; [otherwise] you will be a loser.” (Al-Bukhari 62: #27)

“ ‘When someone with whose religion and character you are satisfied asks your daughter in marriage, accede to his request. If you do not do so, there will be temptation on Earth and extensive corruption.” (At-Tirmidhi #3090)

“The whole world is pleasure, and the best pleasure of the world is the righteous woman.” ‏(Muslim 10: #56)

The above hadiths blatantly reflect that piety and creed are the telling elements of the best spouse. There is no indication that culture or race should play even remote importance in choosing a wife or a husband. Cultural baggage has been created by humans, imposing one’s belief upon another’s, while the easiest, most fulfilling route to take for a marriage would be to love and live like Prophet Muhammad (peace and blessings be upon him).

Prophet Muhammad married wives from diverse cultures, and many of them were converts. They were all united by Islam, and they continued to peruse good relations with the families they left behind. Marriage is the center piece for a thriving Ummah and one that can bind families, as much as it binds nations.

Although multicultural marriages can seem difficult or alien, it is important to remember that racial bias has no place in Islam. In his Farewell Sermon, Prophet Muhammad reminded us of the following Islamic principles:

Thus, there is a resounding message for Muslims to turn back to the Qur’an and drop all cultural baggage that could be hindering a marriage from flourishing.