The kind of advice given to young wives nowadays, to tolerate every kind of injustice often encourages vicious cycles of oppression.
aaa

Editor’s Note: Real names have been changed and the incidents have been slightly altered, to protect the personal privacy of the sisters mentioned in the examples.

Hashim and Nida have been married for eight years. Parents to two children, they are both busy professionals who live with his family. When Hashim comes home from work, Nida is usually in the kitchen helping the ladies of his family prepare and serve dinner.

She rushes to serve him coffee as he unwinds on the couch with his father and children. After dinner, in which everyone talks about current events, Nida helps the ladies of the house clear up. Then she puts the children to bed, while Hashim watches television and chats casually with his father and brothers.

The only private time this couple gets to spend together exclusively is the half-hour or so just before they plop down on the bed to sleep at night, exhausted, their dazed minds mulling over the list of things to do the next day.

The mornings are a whizzed blur: a race against time to get to work/school on time. They are fortunate if they can talk to each other at all over the combined family breakfast din.

Their phone conversations during the day hover around errands, chores, children’s activities and reminders of other things to do.

Many marriages start off and continue along this leg. After the idyllic honeymoon vacation is over, ‘normal’ life resumes with a start, akin to a parked vehicle revving up and lurching into motion.

There is no looking back. Life becomes a blur, as weeks turn into months, and then years.

“Don’t utter a peep of complaint during the first few years, no matter what you face from your husband and in-laws.”

“Stay silent and always do as they wish. Even if your husband ignores you, and prefers others’ company over yours, never say a word of displeasure. Just listen, obey and serve.”

Advice like this is given empathetically, often with an index finger raised and waved in mid-air, to young, naive, nervous and acquiescent brides-to-be, by older matrons who have weathered the storms of married life and emerged rather authoritatively as unchallenged voices of reason and wisdom.

The problem is how, sometimes, dissection of marriage-related culture and Islam results in the encouragement and facilitation of injustice and oppression — known in Arabic as “dhulm”.

Injustice is also facilitated by a particularly misunderstood and twisted application of “patience”, or “sabr”, when sabr is mistaken to mean remaining silent, servile, subservient, and therefore compliant to increasingly unjust and vile behavior from others.

“Patience” means remaining steadfast upon righteousness and obedience of Allah in face of obstacles and opposition. It means abstaining from sinful behavior and rejection of the truth, even when tempted by base desires, or provoked by physical or intangible calamities and afflictions. It also means returning the evil actions meted out by others towards you, with good retaliate conduct and behavior.

However, what it does not imply is that one becomes a doormat inviting others to walk all over them, take advantage of them, or mistreat them. No one – not even the elders of a society (even those who are 80+ in age and who enjoy patriarchal/matriarchal positions in families) – is above the warnings and punishments of Allah in recompense for actions that are abhorrent in the light of Islam.

Unfortunately, the kind of advice given to young wives nowadays, to tolerate every kind of injustice and vile behavior meted out towards them by their husband or in-laws with silence and servility, often encourages, if not fuels, vicious cycles of oppression that recursively continue over generations.

Bina didn’t object when her husband treated her in a demeaning manner behind closed bedroom doors.

His mistreatment of her continued unabated, with her ‘patience’ and silent submissiveness to his commands adding to his confidence to do whatever he wanted with her, whether it was forcing her to watch pornography, chatting flirtatiously with other women over the Internet in front of her eyes, or having casual flings with his coworkers.

No surprise, she got divorced soon after that. 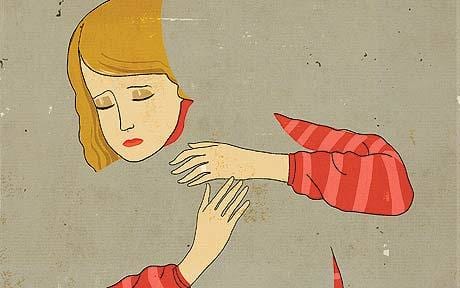 Even when Samina was pregnant, she insisted on helping her mother-in-law do the housework, feeling guilty to be sitting around idly while the latter did everything herself.

One day, when the domestic servant was absconding (which was very often), she was casually asked to mop the floor. Hesitantly, she obeyed, a bit shocked at the request, as her parents had never made her do such chores. However, she showed no displeasure and did the best job she could.

A few days later, she was asked to make flatbreads on the hot stove for everyone at lunch. She again obeyed, without even a hint of a frown. Some days after that, in which she made flatbreads every day, she was asked to carry a hamper full of clothes outside, to the washer, even though by now she was heavily pregnant. Once again, she obeyed. Not surprisingly, she slipped on the wet floor near the washer and fell, hurting her foot. Thankfully, her unborn baby and pregnancy didn’t suffer any harm.

That day, the painfully learnt lesson finally hit her: she was being exploited because of her polite compliance. She spent the remainder of her pregnancy at her parents’ home, with her husband’s permission, who sent her off when he found out, much to his horror, the kind of work she was being made to do when he was at work.

All of this could have been avoided had she not misunderstood the concept of “being patient” in face of oppression, and politely stood up for herself by refusing to do housework that would put herself and her unborn baby’s wellbeing at risk.

Kulsoom can, quite literally, count on her fingers, the number of times she and her husband have had deep and uninterrupted conversations during their 25-year marriage.

This was mostly during those trying times when everyone else among his family and friends let him down, and he had no one else to turn to for support. That was when he talked to Kulsoom.

Most of her married life was spent more in his personal service and that of his family, than in cordial and close companionship with him. As the years passed and they entered old age, their incompatibility increased.

The sad outcome was that now, with their children married and living in their own homes, both husband and wife barely got along, unable to stay together in a room without fighting. And this was at a stage in life when they had no one else besides each other.

Now in her 60’s, Kulsoom looks upon every starry-eyed, blushing newly married couple with a hint of cynicism. “Wait till a few years pass,” she says, sarcastically, “then we’ll see how much ‘in love’ they are!”