We often are introduced to the people around the Prophet (PBUH) through his life and perspective. While there is good reason for this, it can also be of great benefit to learn about the companions of the Messenger as individuals. They were the people who Allah (SWT) calls in the Quran, “[…] the best nation produced [as an example] for mankind.” (Qur’an 3:110)

It can be especially important to look to the lives of the honorable and honored wives of the Prophet (PBUH) to understand that they too were human beings who lived, ate, laughed and struggled to please Allah (SWT). Can there be a better example for us than the mothers of the believers who were all promised paradise?

Continuing in our journey to find out if our mothers were funny, sensitive, outgoing, introspective, self-doubting, or fearless, we take a look at Prophet Muhammad’s (PBUH) wife after Kahdijah’s death, Sawda bint Zam’a.

Among the Prophet Muhammad’s (PBUH) wives, Sawda may be the least mentioned in narrations of the Prophet’s life. Many think she was only sought after for marriage to the Prophet (PBUH) after Khadija’s death so that she could take care of his children and household. While she was indeed a warm and nurturing caregiver to his family, she was also so much more than that to him and our ummah.

Sawda (may Allah be pleased with her) was among the first of those who testified to faith in Allah (SWT) and the messenger (PBUH). She accepted Islam in a time when doing so could very likely mean torture and even death at the hands of the Quraysh. But Sawda didn’t let fear stop her from affirming the truth.

Sawda was the first Muslim in her family and she played a vital role in her husband coming to Islam. She was also among those who migrated in the cause of Allah (SWT). She left her home and everything she knew to travel across the desert and ocean to a distant land known to her only by its name, Abyssinia, in order to practice her faith in safety.

After some time in her new home of Abyssinia, Sawda’s husband fell ill and passed away. She once again traveled by sea and desert, but this time to return to Mecca to be with her community.

Sawda was a storyteller

On Sawda’s return, she reunited with the believers of Mecca. But she didn’t forget about all her experiences in Abyssinia. Often she could be found mesmerizing the Muslims with her tales of travel and exotic Abyssinian adventures.

Her favorite stories to tell were those that included the family of the Prophet (PBUH) who had migrated to Abyssinia with her. “She would often relate her memorable experiences in Abyssinia, and talk especially about [the Prophet’s] daughter Ruqayyah and her husband, Uthman bin Affan, and the Prophet Muhammad would listen with great interest.” (Ghadanfar)

But as a widow she was lonely, and she soon accepted a proposal of marriage to the Prophet (PBUH), who had also lost a dear spouse.

Sawda liked to joke and could laugh at herself

Sawda loved to make others laugh even if that meant she was the butt of the joke. She had a great sense of humor and once she saw pain and sadness on her husband’s face (the Prophet [PBUH]), she decided it would be a good time to lighten his spirits. So she told him about her silly fear the night before.

Sawda related to the Prophet (PBUH) that she prayed behind him for so long that she feared her nose would bleed from the length of the ruku (bending in prayer). Not wanting to get blood everywhere from her imagined impending nosebleed, she held her nose closed. The Prophet (PBUH) couldn’t help but imagine this comical picture of Sawda holding her nose during salah. And his sadness dissipated into laughter. (Qutb & Ghadanfar)

Sawda never took herself too seriously. On one occasion, Aisha and Hafsa (may Allah be pleased with them), knowing of Sawda’s great fear of the Dajjal (also know to Christians as the Antichrist), began to talk about him in front of her:

She was so scared that she immediately ran into a dark room full of cobwebs to hide from the monster. When Muhammad [PBUH] walked in, he found the two enjoying the joke. He asked them what was so amusing. On being told what had happened he called out to [Sawda] to come out as there was no monster around. She came out sheepishly laughing at herself. (Ghadanfar) 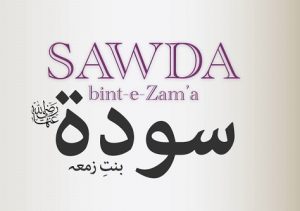 Sawda (may Allah be pleased with her) loved to give in charity. After the Prophet’s (PBUH) death, Sawda became a widow once more and had reached old age. The companions of the Prophet took it upon themselves to care for the mother of the believers. But Sawda sought to take care of those she deemed more in need than herself.

“During his rule, ‘Umar bin Khattab sent her a bag full of Dirhams. She asked what it was, and on learning that it was money she was very surprised […] She then distributed the money among the poor and needy.” (Ghadanfar)

Sawda was also generous when it came to other people’s emotional needs. Sawda, being attuned to others’ needs, gave up her day with the Prophet (PBUH) to Aisha (may Allah be pleased with her) because she knew of their great love and that she herself had less need of companionship since she had reached old age.

“[…] Sauda bint Zam’a gave up her (turn) day and night to Aisha, the wife of the Prophet in order to seek the pleasure of Allah’s Apostle (by that action).” (Bukhari)

Aisha said about Sawda, “never did I find any woman more loving to me than Sawda bint Zam’a. I wished I could be exactly like her […]”. (Muslim) This is the example of a kind, funny, and generous woman that we can all look up to and strive to be more like. She held a vital role in the early community of Muslims, and she was from among the best in the generation of the best of mankind.

G̣hadanfar, Mahmood Ahmad. Great Women of Islam: Who Were given the Good News of Pamay Allah be pleased with herdise. Riyadh U.a.: Darussalam, 2001.