Ramadan is the month of extra patience and charity, and who better to start with, than one’s own spouse!
aaa

A few months ago, I attended a two-day Islamic conference on the fiqh or Islamic jurisprudence of marriage. All praise to Allah, it was a very enlightening and beneficial tertiary-level course that was taught by one of the most honorable and respected Muslim names of our time.

However, there was one particular moment in the course that I probably won’t be forgetting any time soon. And that was when the sheikh who was teaching us the course gave a very heartfelt piece of advice, directed especially towards the brothers seated at the front in the auditorium, which I am quoting below non-verbatim, as best as I can recall from memory:

“Brothers, take it from me: do NOT get married in the month before Ramadan!”

This was expectedly followed by impromptu guffaws around the room. However, when a naive young girl in class, who was undoubtedly single, followed his exhortation with a loud and nonchalant, “Why?”, there was an even louder round of laughter.

Of course, only married people, especially brothers, were immediately able to understand what the sheikh had meant when he gave that advice.

He, wisely, preferred to remain silent in response to the girl’s query, and continued with the class notes.

Ramadan as a Singleton

When a Muslim is single (never-been-married), they have little idea about how the dynamics of life change after marriage, especially if they are also very young.

Most young singletons spend the month of Ramadan either at their parents’ home, or living in a dorm on college campus, or whilst living as a working professional in their own apartment, which they probably share with one or more roomies.

Single Muslims usually pass Ramadan according to a strictly-structured schedule involving just their personal activities and commitments. The latter usually center around their personalized goals of worship, studies, family time, sleep, leisure activities, and/or their work/job requirements during the blessed month.

Single life is usually very predictable and easy to schedule, with the biggest challenge facing a single person regarding Ramadan fasting, being the unfortunate instance of academic exams or a greater job workload coincide with the onset of Ramadan, or their having to give up all their habitual social activities with friends during Ramadan because the schedule just doesn’t allow them to fit into it.

Marriage, however, changes all that.

Let’s face it: marriage requires commitment, adjustment, and quite a bit of “growing up”. You are no longer Daddy’s little girl, or Mama’s boy. You have work to do and commitments towards Allah to fulfill, in lieu of the unique responsibilities and duties that He has placed upon your shoulders regarding the new, and perhaps the most important, relationship in your life.

Another person, who was hitherto not even related to you, becomes a central part of your life 24/7. Now a youngster can no longer suddenly decide to go out with their friends at the drop of a hat, or watch the sports match on television for hours on end without being interrupted. They suddenly have a whole new family, who want them to come over all the time to visit. And they suddenly need to dress up nicely more often than they want to.

Just when a newlywed bride or groom thought that they had successfully adjusted to their novel married life after its first few weeks or months, along comes their first Ramadan as a husband or wife.

And they realize they need to sacrifice even more!

The Realities of New Marriage

It is no secret that when a healthy young girl or boy, who were hitherto virgins, get married, the one thing they want foremost out of this union, is the fulfillment of their conjugal desires.

Many a newly married couple might even be so naive as to assume that, once they are married, they can have sexual relations with their spouse whenever, and as often as, they want to. This is probably more true for Muslim boys than girls.

However, the commencement of actual married life quickly throws the practicalities of reality in their face. The clingy nephews and nieces who refuse to leave their bedroom till late at night.

The common washroom in the family house that is occupied every hour, or has a waiting line outside. The job that needs signing in at 9 a.m sharp on every weekday morning. The in-laws who keep calling on the phone, or persistently knocking in person on the bedroom door. The friends who want a response to their “where-are-you-dude?’ messages on Whatsapp. And who can ignore the long-distance Skype calls from relatives who missed the wedding!

There are meals to be prepared, a house full of relatives to feed, entertain, and transport from here and there, and in-laws to make small talk with, on top of dressing up in formal clothing, and making sure that no signs of fatigue show on the newlyweds’ faces that might give away their lack of night sleep.

Relaxed foreplay and spontaneous, unhurried sexual intimacy? Forget about it!

Enjoying the First Ramadan After Marriage

When Ramadan comes, newlywed couples realize that they need to make even more sacrifices in order to spend it fruitfully, especially those related to the frequency and quality of their sexual intimacy.

Since married Muslims are prohibited from having sexual intercourse during the day in Ramadan, they have only the nights to satisfy their sexual desires, which are very short during summer months.

This nightly worship routine, in addition to the requirement for all Muslims to awaken much earlier at night in order to prepare and partake from the suhoor meal before dawn, further shortens the time at night that a newlywed couple can be sexually intimate in.

It is no surprise then, that Ramadan makes it more challenging for them to be sexually intimate, since the preparation of the suhoor and iftar meals necessitate most new wives to spend more time in the kitchen, either helping out their mother-in-law, or doing it all themselves if they live separately.

The time after iftar tends to fly, as it is spent in eating the first main meal of the day after breaking the fast, followed by praying maghrib prayer, and then getting ready to go to the masjid for congregational tarawih prayers. 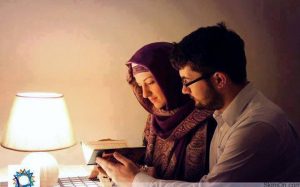 If the newlywed couple is living with the husband’s family, it might be next to impossible for them to be sexually intimate during this time. However, those couples that live in a separate home, can utilize this time (between maghrib and isha) to satisfy their desires, before making timely ghusl together (the ritual bath to remove sexual impurity) and then going off to the masjid for tarawih.

The other two times during the nights in Ramadan, which married couples can utilize to be sexually intimate, are: on retiring to their bedroom after coming home fromtarawih at the masjid, or the time just before (or right after) partaking from the early morning suhoor meal i.e. during the last two hours of the night before Fajr.

One important point for all married Muslims to remember, is that couples are allowed to commence a Ramadan fast in a state of sexual impurity, as long as they perform ghusl as soon as possible after the time for Fajr prayer commences, and proceed to pray Fajr salah within it’s time.

This extra leeway has been provided to them in Islam, for the very reason that they can be sexually intimate right up till Fajr.

However, one thing that all new wives need to realize, and remember, is that having sexual intercourse drains a man’s energy and physical strength, whereas women remain physically unaffected by it.

Consequently, wives should let their husbands choose the time and frequency of sexual relations during Ramadan, even if their desires remain somewhat unsatisfied, so that their husbands’ ability to fast easily, without getting extra drained and tired, is maintained.

Ramadan is the month of extra patience and charity, and who better to start with, than one’s own spouse!