Most Muslim men seeking wives more often than not unabashedly and confidently adhere to those specific commands, guidelines, and rules of Islam
aaa

Sometimes, I catch myself smiling impulsively whenever I recall the drama around a few of the marriage proposals that I received during my early twenties.

A couple of situations in lieu of these were so hilarious that they could easily serve as fodder/manuscript material for a cultural comedy! One, on the other hand, was too mortifying to recall in detail even now, more than ten years later.

Anyhow, a consistent problem that I faced in almost all the marriage proposals that I received, was the shock and indignation that followed my refusal to talk to the prospective (male) candidate on the phone before the proposal negotiations advanced beyond the first preliminary meeting between our parents (mine and his).

I discovered that most, if not all, single guys desired to not just gaze at, but also to talk frankly to a girl that they intended to propose to, either on the phone or in person, right from the start, even before their or the girls’ parents had met each other properly and were completely agreeable to the marital match between the two.

You see, no proposal came for me without the guy already knowing that I donned complete hijab (including the niqab). Yet, despite knowing this, the first thing he demanded was that he meet me (without complete hijab) and/or talk to me on the phone.

This was probably because he wanted to ‘screen’ me first, according to his acceptability/attractiveness criteria for a wife, even before his or my parents approved of us as a match.

Hailing from a culture where, until a few decades ago, it was the norm for many young couples to get betrothed without even talking to each other beyond the preliminary greetings and awkward drawing room small talk in the presence of elders, this was a startling development for me, mainly because I – after started wearing hijab – almost completely avoided talking freely to non-mahrams (husband or close male relative forbidden in marriage) beyond what was necessary.

If guys could be so forthright and demanding about wanting to see and talk to a hijabi girl – someone who distanced herself from non-mahram men due to her religious beliefs,- what did those girls face, you might wonder, who didn’t practice any such restrictions in their interactions with the opposite gender?

The same story, if not worse

Unsurprisingly, a few of my single girlfriends went through worse scenarios during their marital proposal negotiations.

It was customary for most Muslim girls in their twenties, especially those approaching or having surpassed age thirty, to be under immense pressure from their families to meet every single guy who came to their door with a possible marriage proposal.

Furthermore, these girls were commanded by their parents to dress up to look attractive, and to play the cordial hostess in front of him. They were subsequently subjected to polite but awkward, interview-like interrogations, by not just the guy in question, but also his other family members.

Some of my friends were forced by their parents to even go out on a date with a guy who liked them enough after the first meeting, to want to take matters further and ‘get to know them better’.

Mind you, even though most of these Muslim girls didn’t observe the Islamic hijab per se, they were nevertheless shy, chaste, and averse to frankly mingling with every Tom, Dick or Harry who came to their door asking for their hand in marriage, just to acquiesce to his demands of ‘getting to know them’ before deciding if he wanted to marry her or not.

The worst part was being rejected by the guy after a few such meetings, to never hear from him or his family again.

After every emotionally distressing rejection, which delivered yet another considerable blow to their already crumbling self-esteem, another such guy would come knocking on their door after a few weeks, causing their parents to pressurize them all over again to doll up, look pretty, meet and ‘get to know’ him.

It was an agonizing vicious cycle that continued without an end in sight.

Double standards based on hand-picked tenets of Islam

Let’s be clear about one thing: it is true that most Muslim men seeking wives more often than not unabashedly and 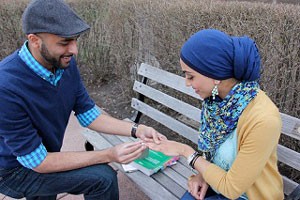 confidently adhere to those specific commands, guidelines, and rules of Islam that give them the upper hand in the marriage proposal process, conveniently overlooking, ignoring or feigning indifference to other Islamic commands that inhibit their authority and freedoms while seeking a wife.

An example of this is how they express (theirversion of) praiseworthy anger and jealousy(based on protectiveness), which is called ‘ghairah’ in Arabic, when their daughters and sisters talk to, are friendly with, or are involved in a romantic relationship with, boys or men who are non-mahrams, even if the mutual intention is to get married.

In such scenarios, average Muslim men immediately cite the teachings of Islam as the motivating factor for their anger, claiming that no Muslim man would allow his sister or daughter to get involved with a boy or man. They also openly cite these relationships and interactions to be haram in Islam.

Ironically, they seem to think that they are absolved from keeping any distance from others’daughters or

sisters when it comes to ‘hanging out’ or mixing freely with girls, or having a romantic relationship before marriage.

When such Muslim men want to seriously get married/settle down, the first thing they want to do, even before a girls’ wali (guardian) approves of them for his daughter, is to look at and talk to the girl herself (usually at the very first meeting between the families), with the intention of approving of or rejecting her on the basis of her physical and personality traits.

That is, they desire access to the girl’s looks and company without undergoing their own appraisal by her parents first.

Once again, they are quick to cite certain ahadith for this, as proof that they are allowed by Islam to look at a girl (with lust) in order to reject her if they do not feel physically inclined towards her.

Actually, the Prophet (peace be upon him) encouraged single men to look at their fiances, yes, but only as a final check before enacting the nikah (marriage), to ensure physical inclination/sexual attraction.

Looking at a girl was not meant to be the first, starting step of the Islamic marriage proposal process, because this ends up treating honorable, single Muslim women like the cattle displayed for sale in a market, being critically appraised ‘for defects’ before purchase.

Looking at a prospective fiancé was meant to be a final, concluding check before going ahead with the nikah, to avoid future regrets.

Most Muslim men who adhere to such obvious double standards, often want free interaction immediately, once they like a girl enough to want her as their future wife. Like the real-life examples I’ve quoted above, they find it difficult to stay away from her before the nikah, and desire to “get to know her” by talking on the phone or coming to meet her.

Result? Their fiancés’ parents are pressured to allow her to talk to them frankly, meet them at their home, or to even go out on dates before the nikah. All of which is haram in Islam.

In short: they want and demand from their fiancé what they’d never allow for their own biological sisters.

This is how many Muslim men are allowed by society to conveniently use a few, cherry-picked commands of Islam as a tool to endorse their own authority and control over mahram women, and to ignore those Islamic commands that limit their desires and freedoms (of interaction) with non-mahram women (wife or close female relative forbidden in marriage).

Conclusion: They are your sisters too

A Muslim man with true ghairah (jealousy) should treat all non-mahram women the way he wants his own sisters and daughters to be treated by men. He will not even think of getting close to a woman who is not his mahram, even if she is betrothed to him.

He will recall that, just like it is obligatory for Muslim women to observe hijab before men, Muslim men are also obligated to not cast a second, willing glance at a non-mahram woman, much less talk to her unnecessarily.

So what can be said about freely talking to, mingling/being friends with, or pursuing romantic relationships with them?