Crossing the cultural line to get married certainly has many challenges, but also therein lays beauty.
aaa

Sister Maryam remembers five years ago when her brother came to her after her wedding and narrated something he had heard at her nikaah .

One of the guests was overheard telling another guest, “How could her father allow her to marry that man.” That man was her husband and he was an Egyptian. Sister Maryam is from Cape Town, South Africa and of Indian heritage.

South Africa is a melting pot of different cultures. It has always been this way, since the Dutch and English brought slaves here in 1652 from Java, Malaysia, Indonesia and India. Due to the apartheid policies, communities lived in their own areas and would marry mostly from their own culture.

Since our reintroduction into the world when we held our first inclusive elections in 1994, we have seen an influx of foreigners from all over Africa , Middle-East and the Indian Sub-Continent. Many came as refugees seeking new opportunities and eventually integrated into the society through marriage.  These cross-cultural marriages are still met with some trepidation in our Muslim communities.

Islam is not only considered as a religion but a way of life. We are one Ummah, united by our faith. Prophet Muhammad (PBUH) taught us that we would not be judged on the color of our skin but on our piety.

“Amongst His signs is that He created you from dust; then, suddenly you were human beings dispersing throughout the earth. And of His signs is that He created for you from yourselves mates that you may find tranquility in them; and He placed between you affection and mercy. Indeed in that are signs for a people who give thought. And of His signs are the creation of the heavens and the earth and the diversity of your languages and your colors. Indeed in that are signs for those of knowledge.” (Ar-Rum: 22)

Allah (SWT) reminds us in this verse about the importance of spreading love and mercy amongst the people, and in particular, the relationship of spouses. However these verses also serve as a reminder that there will be instances when marital relations can become difficult (under normal circumstances), and this is just as common, amongst spouses of different ethnic and cultural backgrounds.

Sisters who took on the challenge

Maryam and Laura Pistorius are two South African women who have married outside of their culture. They relate their stories.

Maryam (31) from Cape Town is married to an Egyptian brother from Sharqiya, a village a few hours out of Cairo. They have however made Cape Town their home base. The couple have been married for seven years and have two children.

Maryam said the family member who questioned her father’s reasoning did not realize that her father went out and investigated her husband when he came to propose the same way he would have done if any South African man came to propose. It was never her intention to marry someone with a different cultural background; it was just something that happened as she came from a family where strong Islamic ideals superseded culture.

“As long as the person I married was a good Muslim, that was the most important.”  Like any other marriage in the beginning, Maryam found communication to be the hardest challenge, especially since her husband was not well versed in English and she wasn’t good at Arabic.

This caused quite a bit of misunderstandings but things are much better now as she learnt Arabic from him, and he has learnt English as well.  She was welcomed with open arms by her husband’s family, accepted for who she was and they did not impose any of their cultures or traditions on her.

Her children are brought up with much emphasis on their Islamic identity, and she says, “There are some traditions that we take from my husband’s culture like kissing an elder’s hand when greeting them.”

Her children are also bilingual, speaking both Arabic and English. Maryam views her marriage as any other marriage that has its normal day to day challenges and does feel that the difference in culture causes more strain.

Maryam stresses that, “the most important thing about getting married to a stranger is to bear in mind that there will be differences in everything. What we eat, how we speak, how we understand and view things. Bearing that in mind, it is important to accept and respect these differences and not to make it a basis for problems. Acceptance is a very important factor when marrying a foreigner and knowing that their ways are not wrong but they are just different.”

Laura Pistorious, a mom of two from Cape Town, describes her cross-cultural marriage in her own words.

When my husband proposed, I accepted without hesitation. The fact that he was a foreigner, a Palestinian Jordanian, and I was a South African featured very little in my decision. I was very newly Muslim and was so pleased with his his character, that I knew he would make the best possible husband for me.

Adjusting to any marriage can be a culture shock. (I personally was horrified to find out just how much food a man can eat, and we still argue about exactly how the dirty clothes should be stored before they are washed.)

Learning to live with someone takes patience; there will be bumps along the way. The fact that we were from different cultures meant that we had to be committed to open conversation.

I think newlyweds, and those in love, often make the mistake of thinking that their partner knows exactly what is happening in their heads, understands exactly how they feel. But it is just not like that. You will need to talk about how you feel, how you perceive things.

Being in a culturally different marriage is constant reminder for me that we need to speak what is in our hearts so we understand each other correctly. 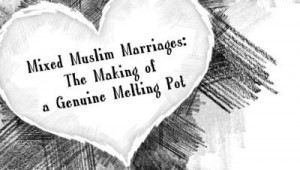 How my husband’s family would accept me was a BIG concern to me. I was aware that had he been home, in Jordan, they would possibly have been much more involved in the process of his marriage than they were with me.

Before we performed nikah, his older brother came to visit SA and met my family. He phoned Mama (my mother in-law), gave his approval. Mama phoned my husband and gave her approval. Alhamdulilah. I met them afterwards and they treat me like a true daughter, and Mama is my mother now.

My family accepted him with trepidation. They were obviously concerned about the different culture and that I had adopted his religion. They also found him very serious initially. Now though, we live with my family and my husband is the son my mother never had. She hopes we will never leave SA.

Sister Laura intelligently sums up the debate by saying, “Culture is so ingrained in us. We accept certain things without even thinking. But religion, Islam, should always supersede it.

Being a revert, who works with other reverts at the Fajrul Islam Dawah Organization in Cape Town, Sister Laura has a deep appreciation of the difference between religion and culture, how they can complement each other and what boundaries should not be crossed.

“Often, new Muslims pick up cultural habits from the community where they learn about Islam. There is nothing wrong with that, except they need to know the difference. Sometimes it takes an outsider’s point of view to help you see it. “

Crossing the cultural line to get married certainly has many challenges, but also therein lays beauty.

Allah (SWt) has reminded us in Surah Ar-Rum how important love and kindness is needed to transgress boundaries of culture and language. Inter-cultural marriages are one way to do that – even if they are full of challenging moments and memories, they strengthen the bonds of the Ummah across the seas.