We often are introduced to the people around the Prophet (Peace and blessings be upon him) through his life and perspective. While there is good reason for this, it can also be of great benefit to learn about the companions of the Messenger as individuals. They were the people who Allah (SWT) calls in the Quran, “[…] the best nation produced [as an example] for mankind.” (Qur’an 3:110)

It can be especially important to look to the lives of the honorable and honored wives of the Prophet (PBUH) to understand that they too were human beings who lived, ate, laughed and struggled to please Allah (SWT). After the Prophet, can there be a better example for us than the mothers of the believers who were all promised paradise?

Continuing in our journey to find out if our mothers were funny, sensitive, outgoing, introspective, self-doubting, or fearless, we take a look at Prophet Muhammad’s (PBUH) wife, Aisha (may Allah be pleased with her).

Among the Prophet Muhammad’s (PBUH) wives, Aisha was the youngest. As she grew older, she became a scholar, a stateswoman, and a resource to all Muslims even to this day.

Aisha (RA) was a very bright young girl, who grew into one of the foremost scholars of Islam.

At the time of her death, she was an expert in interpretation of the Quran, commentary of the Quran, hadith, and jurisprudence. Her rulings could fill volumes of books. In fact, “much of the Book of Tafsir in Sahih Muslim contains narrations from her.” [i]

She was not shy about her quick wit even as a child. While visiting Abu Bakr’s home, The Prophet (PBUH) “saw [Aisha] playing with a winged horse; she was barely five years old at the time. He asked her what it was; she replied it was a horse. He smiled and answered that horses did not have wings! She promptly retorted that the Prophet Sulaiman (PBUH) had winged horses!”. ¹ In this instance, Aisha demonstrated her budding knowledge and willingness to convey it no matter who the audience was.

The Prophet himself (PBUH) was often heard laughing in surprise at her quick and cutting wit.

Aisha (may Allah be pleased with her) was blessed with an astounding memory and never forgot something once she heard it. She is said to have narrated 2210 ahadith (plural for hadith- narrations of the Prophet’s life and sayings) in her lifetime. As such she was one of the most prolific muhadditha (hadith narrator). ¹

All who knew her respected her great intellect. Abu Musa al-Ashari (may Allah be pleased with him), a companion of the Prophet (PBUH) once said: “If we companions of the Messenger of God had any difficulty on a matter, we asked Aisha about it.”[ii]

Along with being highly intelligent, Aisha (may Allah be pleased with her) was a passionate person whose emotions ran hot and cold. She could not help but be prone to jealousy. She loved her husband (PBUH) so much that she did not like it when he spoke highly of other women.

“I was not, jealous of any other wife of the Prophet as I was jealous of Khadijah, because of his constant mentioning of her and because God had commanded him to give her good tidings of a mansion in Paradise of precious stones. And whenever he sacrificed a sheep he would send a fair portion of it to those who had been her intimate friends. Many a time I said to him: ‘It is as if there had never been any other woman in the world except Khadijah’”. [iii]

But Aisha (may Allah be pleased with her) never let her jealousy leave her heart. She never acted on it and was, despite her emotions, very generous and trusting.

Aisha (may Allah be pleased with her) was easily angered and just as easily forgave. Despite her deep attachment to her nephew ‘Abdullah bin Zubair, she became very angry with him when she heard that he thought that her generosity needed to be suppressed. She “swore she would never to talk to him. She asked who on earth thought that he could stop her from spending in the way of Allah (SWT). She asked how he could even dare to say such a thing. And finally, when she calmed down and made up with him, she freed several slaves as penance for breaking her oath.” ¹

Aisha liked to have fun

Early in her marriage to the Prophet (PBUH), Aisha (may Allah be pleased with her) would have her friends over to have fun, play, sing, and enjoy each other’s company. She and the Messenger (PBUH) often had running matches to see who was faster. In her youth, she regularly bested him with her speed. [iv] 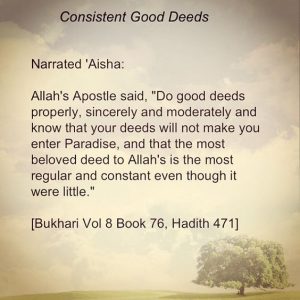 Aisha’s fun loving personality was not limited to her own play, but extended to watching others play sports. One Eid (celebration), some Abyssinians were enjoying the day by displaying their skill with spears. Aisha was eager to watch. She said, “I remember the Messenger of Allah (PBUH) standing at the door of my room, screening me with his cloak, so that I could see the sport of the Abyssinians as they played with their spears in the mosque of the Messenger of Allah (peace and blessings of Allah be upon him).” [v]

Aisha (may Allah be pleased with her) and the Prophet (PBUH) would often spend time entertaining themselves by sharing tales. During one of these story swaps, “The Prophet told her the story of a man called Kharafah whom the Jinn had taken away. [And then] Aisha narrated a detailed story about eleven ladies who were friends and how each of them described her husband.” ¹

After the messenger passed, because of her great knowledge, the ummah looked to Aisha (may Allah be pleased with her) for answers. And she even set many an inauthentic record straight. On the occasion that someone mentioned an inauthentic and derogatory hadith about women invalidating the prayer if they walked in front of a man praying, Aisha refuted them by saying, “You equate us [women] with dogs and donkeys! The Prophet would pray while I lay before him on the bed [between him and the qibla, the direction of the Ka’aba in Mecca, which Muslims face when they pray].”[vi] Never backing down in the face of ignorance and misogyny, she changed many men’s minds about women’s worth and capability.

Arwa Bin Zubair, a Muslim historian who was born directly after the death of the Prophet (PBUH), said, “I did not find anyone more proficient [than Aisha] in the knowledge of the Holy Qur’an, the commandments of halal (lawful) and haram (prohibited), Ilmul-Ansab and Arabic poetry. That is why, even senior companions of the Prophet used to consult Aisha in resolving intricate issues”. [vii]

These are just a few of Aisha’s personality traits. She was a lively woman who stood for truth and justice. She was a fountain of knowledge to all who met her and remains so to those of us learning the religion today. Aisha is a phenomenal role model for women today and an excellent example to those who wish to use their vibrant personalities to better the ummah.

[i] Ghadanfar, Mahmood Ahmad. Great Women of Islam: Who Were given the Good News of Paradise. Riyadh U.a.: Darussalam, 2001.