Muslim women at the time of Prophet Muhammad were financially secure and empowered, yet they downplayed their affluence.
aaa

Alhamdulillah, I came across a hadith of Sahih Al-Bukhari, which I am going to take you through below, which threw ample light upon the nature of the Allah-fearing and financially empowered women (sahabiat) who lived at the time of our Prophet (peace be upon him).

The central figure in it is Zainab, the wife of the noble companion Abdullah bin Mas’ud (May Allah pleased with them).

Narrated `Amr bin Al-Harith: Zainab, the wife of `Abdullah said, “I was in the Mosque and saw the Prophet saying, ‘O women! Give alms even from your ornaments.’

The narration begins with Zainab present in the masjid of Prophet Muhammad (PBUH) listening to him as he was exhorting the women who were there to give in charity, even from some of their trinkets and jewelry.

This proves two things: first, that women used to listen to the sermons of the Prophet in his masjid and that he’d address them specifically during these sermons.

The second is that women have been especially advised by the Prophet (PBUH) to give away some of their jewelry in charity for the sake of Allah.

Muslim women at the time of Prophet Muhammad were financially secure and empowered, yet they downplayed their affluence. They did not need fancy job titles or a bunch of “Yes-Ma’am”-saying subordinates to feel worthwhile.

Zainab used to provide for `Abdullah and those orphans who were under her protection. So she said to `Abdullah, ‘Will you ask Allah’s Messenger whether it will be sufficient for me to spend part of the Zakat on you and the orphans who are under my protection?’

He replied, ‘Will you yourself ask Allah’s Messenger?’

This part of the above mentioned hadith is even more enlightening!

1. Zainab used to financially support not just her husband (who was undoubtedly out of work and needy) but also some orphans (in another narration found in Sunan ibn Majah, they are mentioned to be her deceased brother’s children) – and she undertook this spending for the sake of Allah.

2. Zainab wanted to know if she could count this spending of hers as zakah. What did she do? Did she go out and ask the Prophet herself? No, she took her husband’s counsel about it, and asked him to find this out for her by going to the Prophet with her question.

This shows that even if a wealthy Muslim wife is supporting her husband financially, out of dire need, she should still consult him and take his permission in matters concerning their lives, i.e. treat him as her prince, just as Allah has ordained.

3. Abdullah bin Masud allowed his wife Zainab to go and ask the Prophet about this issue herself. Consequently she went. This indicates that both of them had a secure, trusting relationship, just as the ideal husband-wife relationship should be.

4. Abdullah did not feel his honor lessened by the Prophet discovering that he was being supported by Zainab. Nor did he dislike his wife going out of the house to ask the Prophet a question about matters of jurisprudence in Deen. This indicates that Muslim women can ask scholars and leaders questions of fiqh themselves, and their husband should not stop them without a valid reason.

5. Zainab was truly one awesome lady. Spending on her husband and also on her nieces/nephews? She must have a really big heart!

Going Incognito Out of Humility ‏

(Zainab added): ‘So I went to the Prophet and I saw there an Ansari woman who was standing at the door (of the Prophet) with a similar problem as mine. Bilal passed by us and we asked him, ‘Ask the Prophet whether it is permissible for me to spend (the Zakat) on my husband and the orphans under my protection.’ And we requested Bilal not to inform the Prophet about us.

1. It seems that the women at the time of the Prophet (PBUH) used to spend their money in the way of Allah more than on worldly interests. Most of the women I’ve taught Fiqh of Zakah to at Al-Huda, shared with me that they did not possess enough liquid cash to discharge the zakah on their gold, as they were not earning money.

2. I came to the conclusion that they were unable to save any money from that which they were given by their husbands for household expenditures. Most people tend to undermine, or are outright ignorant of, the tremendous power of saving, especially for those people who are dependent on others for money.

Saving is done by putting away a small portion of money as soon as any money comes into your hands. Small portions thus saved add up over time, and become a considerable pool of liquid cash. Anyway, it is quite clear that the sahabiat were not spendthrifts. They knew how to handle their money wisely, which is why they were able to support their needy husbands as well as minor orphans among their close relatives. 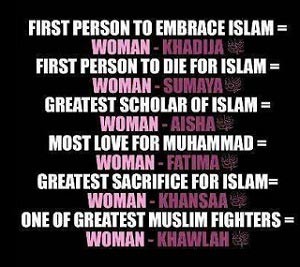 3. They requested Bilal to not inform the Prophet about their identities (unless asked). This undoubtedly stems from humility: they did not want people to find out that they were spending on their husbands and other relatives. What taqwa!

‘So Bilal went inside and asked the Prophet regarding our problem. The Prophet asked,‘Who are those two?’ Bilal replied that she was Zainab. The Prophet said, ‘Which Zainab?’ Bilal said, ‘The wife of `Abdullah (bin Mas`ud).’

I can’t help but smile at this part of the hadith! The Prophet wanted to know who these 2 women were, who were asking him this noble question. Bilal, keeping his word, tried to avoid revealing their identities for as long as he could, by mentioning just their first names.

But the Prophet persisted in finding out exactly which “Zainab” it was, who was standing at his door with this question! So, in obedience to the messenger of Allah (PBUH), Bilal had to relent and divulge her identity.