Unfortunately, due to the social role played by women in almost every community throughout history, they have had fewer opportunities to engage in and contribute to scientific knowledge which was considered a male preserve.
aaa

A number of things around us today mark the visibility or the impending arrival of the so-called ‘Fourth Industrial Revolution’: digital technology, robotics, nano-technology, unlimited access to information, mobile devices, artificial intelligence and so forth.

In a recent discussion on the impacts of this revolution, it was predicted that automation of jobs would cause women to lose out more compared to their male counterparts due to their lower participation in STEM (science, technology, engineering and mathematics) professions, which are among the fastest-growing areas of job creation. Healthcare, energy and financial services have been projected to experience the largest number of job losses in the coming decades.

As debates on gender issues and the continuous efforts to achieve gender equality are now pervasive in every sector of society and public life, it is of great importance to discuss women’s role, position and opportunities in facing this huge challenge. The repercussions of a more digitized, technology-driven world on women’s access to jobs and ability to earn ought to be understood and dealt with accordingly. Perhaps to empower women, respect their aspirations, develop their potentials and tap into their unearthed talents are more crucial and beneficial than to remain in a constant obsession with issues such as sexual liberation or how women dress.

Construct of Knowledge: Between two systems

There is a sharp contrast between the western construct of knowledge, and that of the Islamic civilization and cultivation. The western fundament of knowledge and current success in science and technology are largely rooted in the two remarkable events of Renaissance and Reformation in Europe, which were built upon the rejection of the Church authority and limiting the role of religion in human life.

Religion was viewed as incompatible with rationality, freedom and human progress, so in order for the latter to thrive, the former must be subjugated. Therefore religion was pushed into the corners of houses, worship places and private space. It is of no wonder then, that today we see widespread allergy to the mention of religion and morality, especially when discussing science, as the system itself was first built on the conviction that so long as men adhere to the Divine, their minds can never be completely coherent or logical.

Interestingly, Islamic history and what its classic civilization achieved during the golden era followed a completely different route. Not only different, but perhaps totally the opposite. Islam started in Arabia in the seventh century. Arabia at that time was known to be devoid of any meaningful scientific culture or civilizational achievements. The pre-Islamic Arabs were largely tribal, adhered to strict sectarianism, were in constant war with each other, and were mostly illiterate. With the advent of Islam, they came into contact with a new system of life completely alien to the common mind: a book that started with the first command to ‘Read!’ and repeated verses which pointed out to them the need to ‘think’, ‘reflect’, ‘ponder’, ‘contemplate,’ ‘observe’ and ‘learn’. 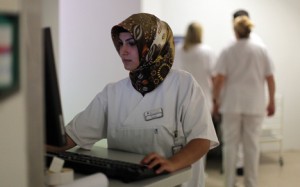 Healthcare, energy and financial services have been projected to experience the largest number of job losses in the coming decades.

With these divine instructions, along with the multiple mentions of stars, moon, sun, planet, stages of human life in the womb and stories containing lessons, the early Muslim community began exploring diverse fields of knowledge, and advanced in mathematics, astronomy, medicine, chemistry and linguistics.

The journey and achievements of the classic Islamic civilization as documented in history therefore had nothing to do with the rejection of religion or the complex battle between religion and rationality as experienced by the west. Conversely, its very basis of knowledge system was supported by the teachings of its holy book, and was derived from a call to respect the ‘law of nature’. Accordingly, Humayun Kabir, in his book Science, Democracy and Islam: And Other Essays (Routledge, 2007) traces back the origin of modern scientific inquiry to the advent of Islam.

In all the Qur’anic verses which emphasize the need to study, investigate, discover and think, neither men nor women have been singled out. This shows that the capability of mastering knowledge is not gender-specific, and the responsibility to explore the nature and ‘exploit’ it for the sake of the common good lie equally on both men and women. Unfortunately, due to the social role played by women in almost every community throughout history, they have had fewer opportunities to engage in and contribute to scientific knowledge which was considered a male preserve.

Some experts on the other hand argue that there have always been female participation in science and human progress, but the methods in which history is documented are flawed and biased, thus making women seemingly ‘invisible’ in various fields of knowledge.

The Islamic civilization is not of much difference. When one talks of it, the names generally quoted are Ibn Haitham, Ibn Sina, Ibn Rushd, al Kindi, Ibn Tufail, Ibn Bajjah, al Farabi, Ibn al-Nafis (and many more); female names are almost non-existent. Not many of us know about  Şerafeddin Sabuncuoğlu, a Turkish female physician and surgeon of the  fifteenth century who wrote the famous manual of surgery Cerrahiyyetu’l-Haniyye, or the great tenth-century mathematicians Amat-Al-Wahid and Sutaita Al-Mahamli from Baghdad, and Lobana of Cordoba.

Similarly, we rarely hear of Rufayda bint Sa’ad who pioneered the area of nursing and treatment of the wounded more than 1000 years ago, Al-‘Ijliya who was an astronomer, Zubayda Abu Ja’far who initiated the building of service stations and water wells from Baghdad to Makkah, and Fatima al-Fehri who established the University of Qarawiyyin in Fes in Morocco in 859 where, in that period, astronomy, languages and sciences were taught. It was also said that through this institution, the Arabic language was introduced to Europe.

As women in general, and Muslim women in particular today, are venturing into the job market and education at a faster rate than ever before, it is imperative to rethink their roles and discover the way forward. As the Islamic teachings heavily promote the understanding and discovering of nature to solve human problems and to protect the welfare of all, and Muslim women in the past have been shown to participate actively in various disciplines of knowledge and nation-building, it is the task of Muslim women today to take up this challenge and continue the great legacy.

The ‘Fourth Industrial Revolution’ is an inevitable phenomenon. The only way to face it is to be prepared, and master it well enough to ensure that it brings greater prosperity, justice and happiness to mankind, not the other way round.

Kabir, Humayun. (2013). Science, Democracy and Islam: And Other Essays. Routledge.