Is it possible, just maybe, that Muslim men and women can share the same space and interact in an inherently civilized manner?
aaa

Many make the argument that hijab and segregation work towards a common end: to prevent weak, lustful men from preying after beautiful women. Yet a brief look at both hijab and the concept of segregation at the time of the prophet (PBUH) paints a very different picture.

A beautiful woman, from among the most beautiful of women, used to pray behind the Prophet. Some of the people used to go to pray in the first row to ensure they would not be able to see her.

(Ibn Majah, Abu Dawud, Tayalisi, Baihaqi, Ahmad, Tirmidhi, and Nasai and it is judged sahih by Albani. He includes it as #2472 in his Silsilat al-Ahadith as-Sahih)

Why is this narration so fascinating? Because it reveals how even in the time of prophet Muhammad (PBUH), the Sahabah (companions) had differing levels of emaan (faith) and even in prayer – a time when all worldly desires are meant to be put aside – they still acted upon their desires.

This woman was publicly known, and though her name is not mentioned in the narration, her identity was obviously common knowledge amongst the people of Medinah. It was also known that the pious men were those who made a point of fighting temptation by removing themselves from a situation where they would feel weak, whereas those whose faith was weaker were those who purposely lingered behind to indulge their desires. 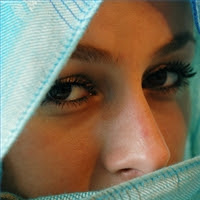 Many make the argument that hijab and segregation work towards a common end: to prevent weak, lustful men from preying after beautiful women.

Now, can you imagine the embarrassment and shame of those men who were publicly rebuked by Allah? Can you imagine having all of Medinah and those who were visiting Madinah at the time, knowing that your weak and sinful behavior was the cause of Allah sending down Divine Revelation to warn you of His Knowledge?

This verse was and remains a public reminder and rebuke to all Muslim men who attempt to dress up their inappropriate behavior with a guise of ‘religiousness.’ It is a reminder that Muslim men are responsible for lowering their gazes, for controlling their behavior, for removing themselves from a situation where they feel weak.

It is a reminder that they cannot blame their own weakness of faith, character, or actions on women! This anecdote, combined with other narrations that discuss the relationship of men and women in the public sphere (the masjid), display how the prophet (PBUH) trained his Companions in the appropriate way of interacting with the other gender.

For example, the prophet (PBUH) made it a habit to remain sitting forward (towards the qiblah) even after finishing prayer, giving the women a chance to leave the masjid before the men (remember, there was no physical barrier between the men and women at the time). He displayed respect towards these women and thus trained his male Companions do act similarly.

In reality, Muslim men and women alike have forgotten the beautiful manners that should mark our actions, especially in mixed-gender interactions.

In many mosques around the world, especially those which are segregated – extremely inappropriate behavior takes place between men and women who attend.

There are numerous horror stories of men who prowl around the women’s entrances, trying to establish verbal or even physical contact under the guise of innocuous ‘conversation’; women who show up to the masjid in full regalia, eager to hunt down a man; and so much more.

Muslim women as well as Muslim men have forgotten their obligation to conduct themselves with the honor and dignity that behooves true believers.

Looking back at the interactions between men and women companions, we see that – whether they were discussing religious matters or arguing a difference of opinion, every instance of contact was marked by a striving for chastity, for spiritual strength and purity.

They understood that every individual is held accountable before Allah, questioned as to whether they played a role in improving society… or making it worse. Was the purpose of their communication a positive one, a beneficial one, one that would add to their book of good deeds? Or was it merely to indulge their baser human desires, the desire to be admired by the other gender, to be flattered, to attract attention, to coax interest not in a subject of import, but of a more personal type?

Whether in the masjid or the mall, school or on the sidewalk, men and women alike are enjoined to be keenly aware of themselves and their roles in creating, encouraging, and maintaining a society that values spiritual purity and chastity.

{Tell the believing men to lower their gazes and guard their private parts. That is purer for them. Indeed, Allah is acquainted with what they do. And tell the believing women to reduce [some] of their vision and guard their private parts and not expose their adornment…And turn to Allah in repentance, all of you, O believers, that you might succeed.} (Qur’an 24: 30-31)

Unfortunately, the concept of spiritual chastity (especially with regards to mixed-gender interaction) has been mocked, criticized, and rejected by many who consider themselves ‘progressive’ and yet fail to recognize that the loss of spiritual chastity has resulted in the detriment of society as a whole.

Respect and dignity can only exist when these values are encouraged, and the current environment of hyper-sexualization does nothing to foster pure, honorable relationships between men and women that are independent of sexual intentions.

As a result of our gross misunderstanding of the Sunnah, we have gone to two extremes: attempting to segregate the genders to an unhealthy level, to the point where a simple, innocent conversation is considered sin; or throwing out any notion of hijab, lowering the gaze, and considering any and all behavior between the genders – even zina – to be acceptable. In both cases, diseased hearts are created and fostered, because there is no holistic understanding of the Qur’an and Sunnah. Islam came to transform the Ummah from one of ignorance to one of beauty, honor, dignity, and respect.

To reach that state, we must go back to the understanding of the prophet and his Companions. Only then can we possibly start seeing the men and women of this Ummah coming together, as they were meant to be, to cooperate upon birr and taqwa: goodness and righteousness.