Our Prophet (PBUH) never forbade women to work. The best example is his wife, Lady Khadijah, she was a very successful business woman.
aaa

After reading two news articles recently about how British mothers are discriminated against due to just having a baby or being pregnant, I feel incredibly lucky to have found a job that suits my needs as a mother.

When it comes to women who choose to work, they believe it’s their basic right to have a job; after all they spent money and time on education and for many, they have worked very hard to get in the positions they have. Some women have no choice because they need money. They may be single mothers or they may choose to help their husbands financially. No matter what a woman decides, she is made to feel guilty in both cases.

Why do we make it so difficult for women?

When I read of a country like the UK making it so hard for pregnant women to keep their jobs or women coming back to work after a maternity leave being discriminated against, it makes me think we are going back 30 or 40 years! Why should this even be an issue in 2015? Why should we still be discriminating against working mothers? Why should they face such an uphill struggle when it comes to choosing to go back to work?

According to the Equality and Human Rights Commission (EHRC), “11% of women surveyed have been dismissed, made redundant or treated so bad that they have felt they have no choice but to leave their jobs!”

I am originally British, but I have not lived there for 9 years. However, I had some difficulty of my own when I was pregnant with my daughter. I was given the option of 3 months paid leave and then return to work or take a further 6 months unpaid leave. I took the unpaid, simply because my husband was in a position where we could afford to do this. Had he not been, I would have been at an absolute loss of what to do. I do not believe that leaving

a 3-month-old baby in a nursery or child care is best for the baby. The baby needs the mother for at least one year after birth, in my opinion. It just seemed so senseless to force a woman into making such a difficult decision when her baby is just 3 months! 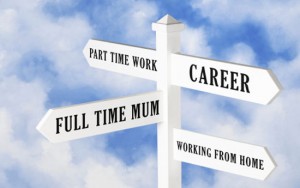 As mothers, we are often made to feel guilty for the numerous choices we make.

After my unpaid leave, I took another 6 months unpaid leave (due to personal reasons) and then resigned to take a further year off to be with my child. When it came to deciding whether to go back to work or not, I was faced with other challenges. I needed a job that was flexible and where I was able to work from home. I still wanted to be the prime carer of my daughter. These jobs, anywhere in the world, are few and far between.

I was lucky, Alhamdulillah, because I found a job that was both flexible and allowed me to work from home so my daughter is still getting my care and attention.

The Problem has always been there

Whilst we still live in a world, where we make women feel so guilty for choices that they make regarding the up-bringing of their children without thinking about their personal circumstances, or where we assume a mother is not going to be able to do the job as hard as someone who has no children, then this problem will always exist.

Our Prophet (PBUH) never forbade women to work. The best example is his wife, Lady Khadijah, she was a very successful business woman. He never stopped her working. As long as women are keeping their honor and dignity whilst working, there is no problem for them to work. On top of that, we need women in the work force. Islam introduced this, yet in our day and age we are still fighting for these rights as well as fairness. We are also still being made to feel guilty for choices we are making as mothers.

When this attitude changes, then we can say we are lucky to be working mothers. Until then, we are in a vicious circle of those in charge believing they know what is best for us, instead of them letting us decide for ourselves.