I was once held captive behind the imaginary bars of a cage created by none but my very own sense of inferiority. The fog of self-defeatism and the anxiety of a weak self-esteem were far worse than the fear of being publicly frowned upon for wearing hijab.

My early encounter with a tacit disapproval of hijab and its subtle mockery by the so-called educated gentry around me gradually eroded the already vulnerable faith I had in the piece of clothing, which was supposed to mean much more than the ‘modernist’ bias against it.

I inhabited a world of contrast between religious values and secular notions in which the former were constantly suppressed by the latter. My lack of knowledge about Islam and hatred of the false cultural practices often associated with religion reinforced the inferiority complex that was crippling me deep inside.

I was in a continuous anxiety and constant anticipation for even a slightest validation of what I believed and practiced; hijab and Islam. At other times, my self-flagellation was manifested by a fluctuation between defensiveness and being overly apologetic.

Years later, having rediscovered the true teachings of Islam and reconnected myself, this time, with the genuine concept of hijab, I came to a painful realization that many Muslims today are suffering from the very same dilemma that I grappled with for years: a sense of inadequacy and low self-esteem. And this is not in spite of, but because of, their seemingly association with Islam in a world where religious values have no place.

The more I observed and spoke with people around, the more convinced I became that this unfortunate phenomenon had deeply plagued the Muslim mind and therefore paralyzed many of its potentials.

When I first ditched the headscarf, the simplest way to describe hijab, I had a sense of temporary satisfaction for I believed I was entitled to freedom of choice. Nevertheless, it was a choice against my conscience, which at the same time was fighting for its right to be heard and understood.

I swallowed the irony down my throat, thinking that the guilt was simply a phase that would go away. Despite knowing it was wrong, I could not resist the temptation of wanting to be glorified or at least, equally accepted by a so-called elite society I grew up with, in my early teen years.

Falling into the lure was made easier by the ‘subservient’ mentality and attitude I held towards the western lifestyle. Later on, I found out that many Muslim girls have a similar struggle; they want to do the right thing in many aspects of life, but the bombardment of contradicting values into their surroundings is so strong that they eventually have to admit defeat and join the crowd.

Some later revert, while some stay with their ‘choice’ of adopting an un-Islamic way of life, only to find themselves constantly battling with their inner voices and hoping that the uncomfortable sense of guilt will one day be brushed away.

Re-embracing hijab was only my first step. The next one was to find out why and how such crisis of the mind happened so that my Muslim sisters would not fall into the same trap.

A long quest and contemplation have led me to the main culprit, which is weakness of the ‘immune system’ within a Muslim as evidenced by ignorance or lack of knowledge and understanding about Islam. This flaw can be attributed either to an individual himself, to the false cultural practices of Muslim communities, or propaganda by the media which creates perpetual confusion.

While Muslims in the west face the challenge of proving themselves peaceful, law-abiding and civic-minded as to counter their questioned patriotism, the misconception equating Islam to terrorism and the Islamic hijab being a sign of women oppression and subjugation to men, Muslims in the other part of the world are psychologically crippled by a feeling of inferiority and hence the desperate need to identify themselves with the west emerges. 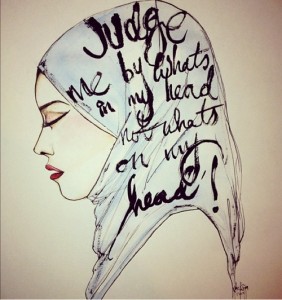 In third world countries, the western world and civilization is regarded as the epitome of success and human accomplishment and it seems to constitute an absolute benchmark for the rest of the world.

Many Muslims today are the product of a modern culture imported mainly from the west and an education system designed to accept and glorify western philosophies, cultures and achievements. The consequences of cultural invasion and a systematic, gradual domination of the mind are far-reaching and more malignant as compared to physical suppression because of their subliminal nature and ability to uphold a conqueror’s desire without force.

I attended different institutions where hijab was neither banned nor was it anathema. In fact, half or majority of the female students had the Islamic hijab physically visible on their bodies. There were unspoken rules however, which were all in line with western values, of how one should look and behave to acquire a certain status and approval.

Those without hijab were extraordinarily aggrandized, ‘silently’ regarded as more beautiful and brilliant, and therefore universally more representable through their apparently positive image and portrayed self-confidence.

On the other hand, those who express their values through a visible hijab were subtly penalized mainly through neglect and inattention, or at times mockery. Labels like being conservative, traditional and even backward were not uncommon.

Once there was a photography session for the university magazine, in the classroom. The photographer, who obviously was a Muslim, casually announced that female students without hijab and who were wearing ‘appropriate’, meaning western clothes should come forward to be in the front line. I attended different institutions where hijab was neither banned nor was it anathema.

In fact, half or majority of the female students had the Islamic hijab physically visible on their bodies. There were unspoken rules however, which were all in line with western values, of how one should look and behave to acquire a certain status and approval. Those without hijab were extraordinarily aggrandized, ‘silently’ regarded as more beautiful and brilliant, and therefore universally more representable through their apparently positive image and portrayed self-confidence.

I cringed at his words for they only reflected a self-defeatist attitude and a slave mentality, which constituted perhaps only the tip of the iceberg. His hidden message could not be clearer: those resembling westerners were more representable and would give a better image for the learning institution.

scThe lecturers inside happily agreed and began dragging the so-called appropriate models to the front bench. The rest of the class, mainly comprising of hijabis and some of whom I personally knew to have been performing academically better, were mercilessly pushed to the back row, perhaps to make them less visible so as not to tarnish the university image!

Imagine how damaging such crime is to the psychology and self-esteem of young Muslims ladies who, at that point of life, are possibly struggling with the question of self-identity and craving for social acceptance.