Estimates are that up to 130 million women and girls have already been subjected to some form of FGM and two million undergo the procedure each year.
aaa

Female genital mutilation` or FGM is a cultural custom of partially or completely removing the external female genitalia and is seen by all the major international organizations as a human rights violation. It has been practiced among all religious, ethnic and cultural groups across all socioeconomic classes. Estimates are that up to 130 million women and girls have already been subjected to some form of FGM and two million undergo the procedure each year.

Carol Bellamy, executive director of the UN’s Children’s Agency (UNICEF), noted that “Female genital mutilation and cutting is a violation of the basic rights of women and girls,” and that, “it is a dangerous and irreversible procedure that negatively impacts the general health, childbearing capabilities and educational opportunities for girls and women.”

The practice can cause both short and long-term health problems ranging from infections, painful scarring, psychological trauma and in some cases death.  Female genital mutilation causes severe bleeding and health issues including cysts, infections, infertility as well as complications in childbirth, increasing the risk of newborn deaths.

Although the practice of FMG is concentrated in about 29 countries in Africa and the Middle East, it remains a worldwide problem. In spite of the global outcry and international efforts to put an end to FGM, the practice remains widespread. The many laws passed, including in many African nations, has not abolished this ancient practice in part because legislation against FGM fails to address the social and cultural reasons for committing the act in the first place.  The law is not always a sufficient enough deterrent in cultures where parents not only see others engaging in the practice, but are also socially expected to do so as well.

Nonetheless, legislation can serve as a tool to strengthen the legitimacy of the arguments for its total eradication, which continues to be the goal of the international community. UNICEF is currently leading the largest global program to accelerate the abandonment of FGM. The program currently focuses on 17 African countries and also supports regional and global initiatives.

There is no such mandate whatsoever for female circumcision, which the world health organization believes is an inappropriate term as it implies that the procedure is analogous to male circumcision.  The word “mutilation” although accurate has been criticized as hostile and in some situations, the term Female Genital Cutting was suggested.

However, Mutilation is more in keeping with the horror of the offense, and culture cannot and should not be employed to justify customs which violate all rational considerations. In this case,  this custom is not only physically damaging but can cause life long trauma.

A study in practicing African communities found that women who have undergone FGM have the same levels of Post Traumatic Stress Disorder (PTSD) as adults who have been subjected to early childhood abuse and that the majority of the women (80 per cent) suffer from affective (mood) or anxiety disorders.

Permitting such a ritual falls under the category of tolerating a pre-Islamic practice and may be overruled by the Islamic prohibition against harmful acts. Observe, for example, that Islamic law protects a woman’s right to sexual enjoyment, as demonstrated by the fact that a woman has the right to divorce on the grounds that her husband does not provide sexual satisfaction. By extension,  it follows that Islamic law prohibits any genital mutilation which impairs the woman’s ability to enjoy sexual relations. 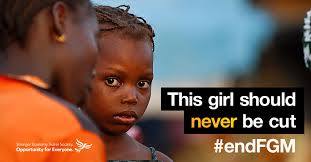 If the Islamic law does not mandate female genital mutilation then how is it that so many people from certain countries with large Muslim populations insist that FGM is not only permitted, but required?

The answer becomes obvious when one realizes that Christians from many of these same countries also insist that the tradition is mandated by their religion.  This illustrates a good example of how local customs can become enshrined as religious obligations, and not only with respect to FGM.  When customs are sanctioned or permitted by the state, they evolve the status of divine sanction in the minds of the people. And this can explain why people often confuse traditions rooted in local culture with religious requirements.

In 2007 the former Grand Mufti of Egypt Ali Gomaa stated that “The traditional form of excision is a practice totally banned by Islam because of the compelling evidence of the extensive damage it causes to women’s bodies and minds.” Scholars have opposed FGM, arguing that it is not an Islamic practice and is not endorsed by Islamic jurisprudence.

For Muslims, female genital mutilation should be considered a prohibited practice and opposition to it should be part of our ongoing mandate to fight against violence and oppression. Since it has no rational value, there is no justification for Muslims to engage in this harmful practice. Although education and legislation can help to curb the practice, it remains equally important that religious authority figures become more vocal in their pronouncements against this archaic tradition; only then will we witness any meaningful change in ending this human rights violation.

Why Does Islam Encourage Circumcision?